Is there a cheapest/lightest/simplest wing structure other than aluminium tube and fabric?

Some design detail. Note one of the customers conversion to Tractor layout.
I always thought this would be the best design platform to expand to a 314 pound USA FAR 103 legal float plane. From 122 pounds to 314 by adding floats
and all needed enhancements. ( not including extra chute allowance )

oriol said:
The idea of flying in a powerless trike is that the trike can be one of my recumbents, like the picure I posted before in the thread.
Click to expand...

Ah, I'm with you... Its possible but would be very difficult.
Personally, I think I would sooner carry a bicycle on my back, foot-launching is VERY versatile, a recumbent would be limiting.

The video showing the trike doing touch-n-goes is flying ridge lift in what looks to be 15~20mph winds.
One wrong move in that much wind whilst launching will get you in all sorts of trouble even if you are on your feet and very nimble.
A trike would very difficult to control and almost impossible to recover if you got out of sync.... A paraglider in a 20mph wind can do you a lot of damage on the ground if you lose control of it.

proppastie said:
what are the red rectangle at the LE and Trailing Edge......is the top angle attached with cord to the round ......if so what kind?
Click to expand...

The red items are the rivets used to attach to the spar. Since this is in Solidworks as an assembly, I put those 3 rivets in the rib CAD model to avoid having to add 3 rivets at every rib station in the assembly model for the full wing. 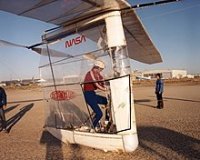 This style is not really very easy-to-build; for example they had to make all the carbon-fiber tubes by doing a layup over aluminum and burning it off with acid (it all took place a few decades ago, you can probably get some boom mics or something now)

However, stuff did get built. In More with Less the author characterizes MacReady's approach as iterative design, rapid prototyping, constantly building and destroying of prototypes, while the British competitors had much more complex designs. You can't convert brainstorming ideas into testable planes if the construction method is too slow. Of course the mylar and carbon is very light, too.

But back to the OP, moldless composite construction is a very very rapid construction method. It's prohibitive (for ultralights) because it's heavy, and you don't need 2 lbs/ft^3 worth of compressive strength nor the ability to create arbitrary shapes, so you probably want to use air instead of extruded plastic, which means fabric or film covering.
Last edited: Jan 15, 2022
A

I ran into the Birdman team while being team safety Nazi for my skydiving team at the collegiate nationals in '76. ( the violently pink t shirt with the school logo and "Team safety Nazi" on the front, with a cartoon of an Ogre with mace and the caption "you guys be safe or I'll kill you" on the back made the title stick )

Saw the machine in the hanger, made enthusiastic noises and one comment to improve a thing, was told it would not work, and let them go back to work, understanding they were busy and some Yahoo skydiver was just a distraction. No, seriously, I know all about passing fools. Wasn't upset at being blown off.

I was amused by the advertisement the next month were they were touting the big improvement...

It looked like it was well put together, and the revised model flew pretty good.

TFF said:
HenryK, what would your choice be after a Kasperwing?
Click to expand...

Thanks Gregory Perkins for posting pictures of the Birdman!

I did not knew that aircraft. Using both wheels and legs as landing gear is very clever. BTW What is the material glued on the leading edge?

You mentionned that you are familiar with several methods used to catapult and aircraft. Can you please explain them?

Despite its limitations, there is nothing that can beat a parafan in terms of operational cost. As a side note, a parafan pilot surpirised me when he made me realize, that parafans are less pollutant than paragliders; because you produce more pollution by driving to a paragliding site rather flying next to home with a parafan.

In any case paragliding/flying a saillpane involves a lot of assistance. Unless you are able to land from where you took off, to get to your car and drive back home.

A way to reduce the need for assistancce would be a flying bicycle. There are at least two commercial available parafan bikes that I know. Those bicycles are neither hard to build nor very practical for road use. OTOH I saw a couple of videos of people flying with a bicycle attached to their back. It does not seem too practical unless the ride to the take off is very short.

Another option using bicycle technology in a hang glider/paraglider. Would be to use as part of the landing gear, an electric wheel that can help you to reach take off speed. So that you do not depend on your legs only. There is a street legal powered wheel that reaches 25 kmh. Another one can reach up to 45 kmh. Both are off the self and very easy to install. It is a bit challenging to reach a 35 kmh take off speed, with a performing 35 kg hanglider without a good headwing.

This idea might help for building a tube and fabric primary glider that can fold, or be trailered on the top of a car.

Thanks everyone for sharing their inputs. It is really helpful to learn the pros and cons of different tested configurations.

You can find videos of electric wheels on YT with people going off road and doing crazy stunt. Believe me those wheels have sufficient power to assist a sub 70kgs primary glider/hang glider achieve V take off. Also electric bicycle motors are used on heavy duty cargo bikes.

I am not saying that elecric bicycle motors are better than an ICE paramotor engines. I am just saying that they can help spare your legs, when taking off in a hanglider, or something like this, without an absurd battery weight penalty.

-yes!
but version with high RPM light,cheap motor get us better Power/Eweight ratio...

I agree with you it was well designed, I was a student at Embry Riddle, Victor Tildel our aerodynamics prof was heavily involved with Emmet Tally in the design of the TL-1. We worked on the wing parts after classes. Tisdel also worked on aerodynamics for a stock car driver, his name escapes me at the moment but the models they were putting in the wind tunnel were painted and the sand that was everywhere around the tunnel lab got into the paint. They ran them any way for some preliminary data and repainted them the next day. Turns out the model with sand had lower drag than the smooth finish. So they put a pebble finish vinyl top on the race car it improved the cars top end and won the Daytona 500 that year.
A

oriol said:
You mentionned that you are familiar with several methods used to catapult and aircraft. Can you please explain them?
Click to expand...

In rough order of altitude expected...

Human tow. Get some young strong folk, use a speed changing pully/block arrangement, and tow to the limit of the field and crew endurance. Fairly short altitudes, but a marginal powered craft can cruise away once airborne.

Bungee tow, restrain craft and have humans run with multiple tow ropes with elastic sections. Release craft before you drag the crew backwards in a cartoonish way. Very typical system for hill launch popular in 1920-30s.

Truck/car/boat tow with fixed length lines. I rate this as most dangerous, ymmv.

Truck/car/boat tow with payout winch. The safest and best way, IF you have the ground room.

I've used every one of these, you may argue that "catapult" doesn't apply to truck/car /boat tow, it's a question of definition.

things I have not personally tried, but know exist.

Rocket launch catapult. Most famous in the second generation of CAM ships, and Zero Length launch systems for jets in the Cold War.

I've also built Onangers, Ballista, and Trebuchets, but do not consider them useful to launch aircraft, and can give reasons! Much better throwing rocks, sturdy containers of Greek Fire, and big arrows, consider me for your next siege needs!

Skypilot053 said:
I agree with you it was well designed, I was a student at Embry Riddle, Victor Tildel our aerodynamics prof was heavily involved with Emmet Tally in the design of the TL-1.
Click to expand...

I believe the structure failed in non-aerobatic flight on one or two of them, so I'm nto sure the term "well designed" can withstand a lot of scrutiny. It might have been good for a university demonstration or record-setting machine, but to have advertised the Birdman as being safe enough for everyday use in any range of real-world conditions...?

That being said, I am fascinated by this aircraft just like so many others have been, and the thought of engineering carbon pulltrusions to stiffen or strengthen the structure in the more delicate areas is appealing.
A

Well Designed? That I could not tell at a glance. Built nicely, workmanship of the prototype, That I could tell even then. It's "competition" was the hang glider derived ultralights, and closest in my eye to the Irv Culver-Volmer VJ-23 hang glider.

Which was Very Well Designed. ( as you'd expect from a Skunk Works original )

I preferred the much easier to build aluminum tubing designs, where a few week nights in a garage could do repairs and modifications for the upcoming weekend flying.

Aesquire said:
I've also built Onangers, Ballista, and Trebuchets, but do not consider them useful to launch aircraft, and can give reasons! Much better throwing rocks, sturdy containers of Greek Fire, and big arrows, consider me for your next siege needs!
Click to expand...

After I build my Castle I will call you for my defensive needs.
G

Maybe the Kiceniuk Icarus II is worthy of consideration. A 25kg empty weight leaves a bit for an engine and pilot pod. Modern materials might even lower the empty weight.

Yes, that sort of Dunne tailless biplane is a very efficient design for its weight, though most people would, I think, prefer landing gear that didn't require good sneakers. ;-p


GeeZee said:
Maybe the Kiceniuk Icarus II is worthy of consideration. A 25kg empty weight leaves a bit for an engine and pilot pod. Modern materials might even lower the empty weight.
Click to expand...