Is there a cheapest/lightest/simplest wing structure other than aluminium tube and fabric?

Always that I think about the thrill of building your own airplane. I realize that there is nothing simpler than buying a second hand glider/paraglider and then build a little charriot. This solution seems to be the most practical and cheap, since it spares the cost of hangar rent, if you come up with a package that can fit inside your car. The driving factor here is weight penalty considerations, the equivalent of part 103 category in here is the sub 70Kgs. This makes very hard to use conventional sport/certified airplane building techniques.

In any case to dream is for free, and I always wonder about a possible wing structure solution that might allow for a very light aircraft. Particularly something that would be very straighforward to build. I am worried about getting stuck in a long build, like a composite moldless wing.

In any case, it is fun to see that probably if I come up with an incredible solution, I would probably have spent more time thinking instead of sanding/rivetting a kit that would probably fly much better.

This picture below is from what I believe is a Lil Bitts. I think that this combination of plastic and alu for the rib and that of the Goat, are perhaps the simplest and lightest builds, please correct me if I am wrong?

I believe that it would be possible to 3d print in composite the plastic part that joins the Lil Bitts rib, so that you are able to get the profile you want. Perhaps building something like this would allow to reduce the weight of a wingspan similar of the Goat? 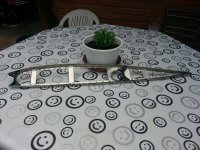 I don't remember what the weight was of my old weightshift Quicksilver, but I think it was around your 70kg limit or 140 lbs. That had an aluminum ladder frame with bent tubing battens (slipped into pockets in the sails) as ribs.

One way to reduce the weight would be to choose a compromise between rigid-wing and flex-wing techniques. The Wheeler/Skycraft Scout comes to mind, which is a two-axis (rudder/elevator only) powered ultralight with a leading edge rigid spar, flexible cable trailing edge, and cable bracing. The originals had a 12 hp engine and an empty weight of just 50 kg. Later ones were a little heavier but some even had a fuselage pod or even a full fuselage. 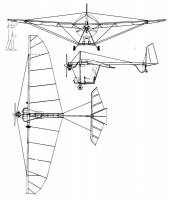 oriol said:
In any case, it is fun to see that probably if I come up with an incredible solution, I would probably have spent more time thinking instead of sanding/rivetting a kit that would probably fly much better.
Click to expand...

I am attempting the Sub70kg three axis conundrum using Sandlin's cable braced Goat4 wings, Cable braced single tube tail boom with the prop running around the boom a sketchy flexible aileron implementation and welded 6082 22mm tubing for the pilot frame.
My calculations have the weight very very close to 75kg (5kg reserve allowance), with 10 litres of fuel I currently have a theoretical 2kg to spare for seatbelt, control pully fixtures and any other bits I have forgotten or require such as failsafe cables or small gussets etc.
I do not know if it can be done but it is close enough that 90% of the materials are bought and machining/welding and head-scratching has begun in order to find out in reality.
I am mildly optimistic on making the weight but have no idea how I will feel when I am stood before the finished article.... I may be unwilling to fly the thing

Thanks Dana and Matthew for your comments!

Regarding a ladder frame solution there is the Pouchel. It seems a bit odd to me, because of the combination of gluing foam ribs to aluminium but it is worth to consider. Plans of the Pouchel are not free but available.

I did not know about the Skycraft, thanks Matthew! It would be very hard to come up with something less simple than that. The only thing that comes to mind would be a Rogallo wing. I do not know if I would feel secure with a two axis in case of turbulence. Although I am pendular pilot the skycraft feels a bit limited in case of turbulence.

I have a small shop in a shared workspace with some carpenters. My main skill is TIG welding, so I tend to gravitate to a small metal tubular fuselage. The wing seems to be the hardest, partly because welding a wing would weight prohibitive. That being said, it would be dumb not to consider wood as an alternative, given the advice and help I can get from skilled carpenters.

Perhaps it is hard to find Sitka Spruce in here, but I probably can find alternative aircraft wood grade on a local supplier.

Because of the imposed simplicity and weight penalty getting rid of a tail seems a very interesting option. A flying wing plank glider like the vintage Backstrom EPB, which is under 70Kg without engine like the Goat, seems very inspiring.

Albeit there is the <70 KG category, I think that also powered saiplanes can enjoy some excemptions if compared with sport aircraft. Still you have to consider very well the pros and cons. Trailering the aircraft to the Pyrennees each time you want to fly is not very convenient.

With my skills the simplest aircraft to build other than a nanotrike or a parafan, would be a gyro. I do not think there are gyros under 70kgs, but it is perhaps something that could be done?

I guess that there is no straightforward answer. There is an ideal aircraft for any homebuilder or pilot. I have to carefully consider all the pros and cons before hitting the road.

I doubt very much that any sub-70 kg powered ultralight would inspire confidence in turbulence. Even most Part 103 designs (sub-115 kg) are limited to fair weather if you are being prudent. I considered Mike Sandlin's powered designs, the Wood Sky Pup, and the original Croses Pouplume but they are all well over 70 kg. To be clear, you are talking about powered aircraft not gliders, is that correct?

I'll need to stop pondering and start roughing out the numbers to see if it's feasible. Maybe I'm mad.

Bit of thread drift, but the notion that nobody is jamming these out by the hundreds in some Asian factory to be sold for under $10k leads me to believe no person would actually pay money for a cheap new airplane.

Don’t let they deter you.

Floydr92 said:
I'll need to stop pondering and start roughing out the numbers
Click to expand...

I spent months on mine chasing diminishing returns... I found it pretty hard to swap the pen for the spanners.
I still feel like its a gamble and I might fail to make the weight I'm after but I reached a point where I would run out of steam if I didn't start building.

cluttonfred said:
I doubt very much that any sub-70 kg powered ultralight would inspire confidence in turbulence
Click to expand...

In free flight paragliding, I found active days a lot of fun (thousands of hours).. Strapped and engine to my back and the fun went right out of thermals... I can do it but I don't like it.
I think a three axis sub70 might change that a bit, active flying on a paramotor is very physically taxing, a joystick and yaw pedals might make life a whole lot easier

Blackburn Mark said:
I spent months on mine chasing diminishing returns... I found it pretty hard to swap the pen for the spanners.
I still feel like its a gamble and I might fail to make the weight I'm after but I reached a point where I would run out of steam if I didn't start building.
Click to expand...

Worst case if it doesn't make weight it will be a legal SSDR. That's my logic anyway. I'm slowly plodding along with microlight lessons but I've temporarily paused that as I can't fly with a mask as my specs go foggy!

Floydr92 said:
Worst case if it doesn't make weight it will be a legal SSDR
Click to expand...

I love the Sub70 freedom and price tag, I want to make it work so bad.
I can dump my four stroke to save 6kg with a shitty two stoke (badly don't want to do that) and dump some fuel capacity.

The only likely way to achieve a sub 70KG "airplane" is a very thick plank style flying wing, probably a Fauvel derivative. Look at JC Debreyer's first original wood Pelican, it was a minimal marginal airframe but it achieved the goal with some amount of safety and usability.

So now take that concept, and build it out of the latest carbon pulltrusions and the lightest weight covering film... and that will likely be about as light of an aircraft as you can reliably create, without a big university or a dotcom billionaire behind you.

Tiger Tim said:
Bit of thread drift, but the notion that nobody is jamming these out by the hundreds in some Asian factory to be sold for under $10k leads me to believe no person would actually pay money for a cheap new airplane.
Click to expand...

Well, define "cheap" and flesh out the spec for "airplane". Seems like the Hummel folks will find out soon with their factory built Ultra Cruisers. Not 10K, but not 40K either. I'd pay 50K for a new 65-85 hp LSA with VFR electronic gauges. That seems cheap to me. At least, reasonable to finance and insure since it's new, not some beater legacy aircraft. I think if Zenith came up with a cost reduced 7XX series LSA compliant factory built option for around 50K, they'd have plenty of takers. Same with Vans or Rans, or Sonex. I'm not interested in a 10K powered kite though. Sorry to push the thread further off...
T

Takers are not the problem. Selling something for 50 when it cost 100 with no profit is the hard part.
H

Is there a cheapest/lightest/simplest wing structure
no
R