Andy, it's hard to go wrong with an Airbike! The one we flew had a 40 hp engine and climbed about 750 fpm. Why not up the hp to 50 with a Rotax 503. With the right prop it should climb over 1000 fpm easily. Paul Feibich has flown his 503 powered Airbike for over a decade and still loves it.

cluttonfred said:
That's a very cool plane, radfordc, though somehow I have this urge to see it through the windscreen and crossed wires of a Nieport 11 Bébé just before firing my Lewis gun. ;-p
Click to expand...

I almost met my maker trying to chase a Nieuport. It was at the Gathering of Eagles flyin that used to be held in Gardner, KS. I was at 500 or so AGL and turned in behind a passing N-28. I banked and pulled and suddenly was looking straight down at the ground. I never flew with the small wings again.
L

-Unless you use a fancy airfoil or flaps, stall for a 5 lb loading will be around 36 mph. The pitot, if that's what you're using, will be at an angle and give you a smaller reading.

-One could always cover the fuselage of the LE XL.

If you do a search on "syson bolted aluminum" you will find a paper that you might find relevant. (omit the quotes from your search)

Not needing to be part 103 may open up your choice of engines, but whether the reduced trouble with the engine may not be worth building a bigger airframe.

Alternatively, to increase the gross weight, one could find a "dead" / "unfinished" example and structurally test it to failure (one would also need to conform it to the drawings just to make sure it is actually whats on the paper). This would give one a much better understanding of just were it would fail, the design strength and the critical failure mechanisms of the style/ type of detail design.
A

Charlie, Paul just crossed 1100 hours on his Airbike!
Ours never climbed that good for me (265 lbs at that time). On a hot day, forget it.
I was never a fan of having my knees in the wind either. Looks awesome on the ground, but acted like a drogue chute prying my legs open. Enclosing the front of the cockpit isn't that simple either since the pedals are right on the firewall. A guy my height (6'2") would need another 6 inches, which would change fuselage length, center of gravity, yada, yada. Then there's the welding thing. I own a welder, but I don't weld. Go figure.
Ir27, Gonna check those refs out. Thanks again.
A

Ir27, As I opened that Ben Syson article, I realized that I'd read it before--not long ago. It's great engineering data. While it doesn't address square tubing, the info will be useful as I address stronger wings spars and struts.

As for covering a LE..., I hear great things about how she flies, but it just wasn't designed with an artist's eye. The mechanics seem to be sound, but I don't think I'd be proud to say I built such an aesthetically unpleasant machine. I wouldn't smile when I opened the hangar door. The windscreen area gives it an F-117 feel, but instead of a sleek nose, it has a blunted, clunky, uncowled engine. The more builders try to add covering to these planes, the more the resulting flat-faceted triangles make it look like a failed attempt at 'stealth fighter chic'. The best examples of the LE are the most uncovered examples as they don't emphasize the inelegant lines. There's a pretty nice green one with black nylon bicycle wheels out there. The construction technique is nearly identical to Wayne Ison's Airbike--which is a beautiful airplane (until someone attempts too much covering)--but maybe Milholland just didn't want to look like he was plagiarizing Ison's work, so he was forced to make choices that ended in an ugly duckling. I guess a guy could really drill down on making it better looking with a wrapped windscreen or something. 'Eye of the beholder' I guess. All that said, the AP is not super pretty either, but it has good bones and better base lines to work with IMO.
I think some of the best performing airplanes in history have also been some of the most beautiful. P-51, F-16, SU-27, Mig 29, F-18, F-22, RV-8, Concorde, 747, Boeing 314 (my favorite), SR-71, etc.
I think there is a direct link between aerodynamics and elegance. Even true in the world of birds--The ugliest birds don't fly as well as the pretty ones--highly subject to opinion.
T

I believed the whole original point of the Legal Eagle was it could be built by plans. The original Airbike could not. Different now, but it was not an option originally. Same with the engine; four stroke over two. There is not much aesthetic difference, a line here or there, feet in or out. I think the LE can be pounded on a little more back country style. Square off the tail and add fancy wing tips and a LE would look the same except the width. Is the LE a copy, yes; so people could build their own.

I think the Legal Eagle and Leonard Milholland's other designs (I have Cabin Eagle plans) could be easily refined into something a little more attractive. Looking to meet Part 103, you need to keep it stripped down, but if building anas experimental, amateur-built you could add a few pounds to make it pretty. The Legal Eagle XL is already set up for big and tall pilots up to 275 lbs. Fully covered in light fabric with a rounded turtledeck, rounded top ahead of the instrument panel, semi-circular windscreen, and J-3 style engine cowling, it would look great.
T

The problem is weight and staying Pt 103. Margins are small. At the speeds 103 aircraft fly, looks are weight. Most have bla paint because paint is weight. When I was painting my wings, I could feel it get heavier every time I flipped the wing. Add a fourth tube and a turtle deck or fake sides like a champ, you might as well built a Baby Ace. You used up your margin. I’m not opposed with it being a little overweight on a good faith effort. Tarting it up and it being fat deserves no sympathy.
L

I have no concerns with the weight. I will happily do the whole HBA documentation/certification/registration thing.
I just want build on something akin to a part 103 budget.
Since the threat is about increasing gross weight, I have little hope of it being super light.
A 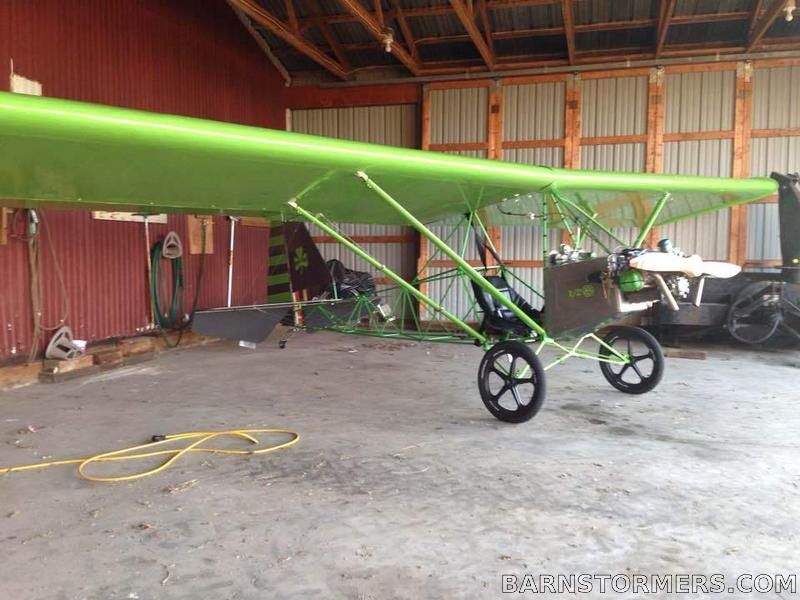 When I worked for the narcissistic owner of Interstate Aircraft, about two decades ago, he mentioned that he wanted to redesign the Arctic Tern to have a useful load of 1000 pounds so he could market it as “the half-ton pickup of the sky.” Thoughtlessly, I blurted out, “you'll have to change the elevator trim to something more like a Cub, because adding a second trim tab won’t cut it.”
Since Bart was a narcissist, if it wasn’t his idea, it wasn’t going to happen...thus, he completely ignored the trim system, and his “half-ton” redesign effort failed to achieve certification because of inadequate trim. The FAA boys from Windsor Locks said it had nothing to do with Bart’s continued assertions that they were wrong because he once read FAR Part 23, and it didn’t mention industry production standards and practices.
So lessons learned: don’t ignore the trim, if you have it, when redesigning to increase your gross weight; and stay out of aviation if you’re a narcissist.
A

The one light plane I've owned, had trim and used a lawnmower throttle to adjust it. I never used it.
Good advice. I shall heed.

Great example. Look at all the air it has been built with!
T

If it’s about cost and weight, something like a Baby Ace is in the same ballpark to build. FlyBaby. MiniMax with full VW. All depends on scrounging, but a friend’s LE materials was about $3500 then added brakes and Carlson wing struts probably another $600. Covering$300. Hummel engine $4500. Probably needed $500 more to be finished. He sold it when it was time to cover. He had built three other homebuilts and was done. There are a lot of planes that will be cheap to run that are better planes that can already handle the weight instead of making something else work badly. I like 103 planes but not when they are not. So many better things out there once the money is being spent if not making weight.
You must log in or register to reply here.
Share:
Facebook Twitter Reddit Pinterest Tumblr WhatsApp Email Link