Hydrogen generation use and storage.

PMD said:
Controlling NOx formation can be a simple matter by using some pre-oxidized hydrogen to change the chemistry and thermal properties within the combustion chamber.
Click to expand...

Reductants are used. Ammonia, for one, via urea for example. Hydroxides as well, but the engine will be short lived (it's been the obvious example proposed by the same people that brought you solutions based on assumptions of spherical cows in a vacuum).

Water injection has one practical NOx lowering purpose: to cool the charge to reduce the rate of NOx formation and salvage some of the excess enthalpy in the process.

PMD said:
Well, if we can harvest the hydrogen from the sun, we would deplete our O2 somewhat and raise our H2O. If we take the the H2 from the H20 in the ocean, it remains same level
Click to expand...

One would be compelled to expend perhaps a million portions of terrestrial H2 in a storied attempt to harvest a single portion of H2 from the sun.

Okay, new question, how much volume does a 2.5 KWH H2 tank require?
T

Roughly a third of the volume required for the same energy of hydrocarbons, plus insulation or additional structural weight if you plan on keeping it around long without using it.
A

How many atmospheres of pressure? How will you burn it?

If the question was about gasoline, you'd figure ambient and then have to specify what engine. If you want range in 5 gallons you're going to want to know airframe, too. Specify assumptions on throttle setting, altitude climbed to, etc.etc. Flying a PPG with a 185cc 2 stroke? From Denver? LA? Flying a RV-14 with a 8850cc 4 stroke?

One answer is 33.6 kWh per kg. ( from RMI.org which seems to be an .org that wants to appear very well meaning, and I trust as far as I can throw a Tesla Home Battery ) And only needs a series of other questions asked to get your answer, besides "are they lying sacks?" . ( I don't know, but trust in this subject is scarcer than diamonds. )
V

trimtab said:
Roughly a third of the volume required for the same energy of hydrocarbons, plus insulation or additional structural weight if you plan on keeping it around long without using it.
Click to expand...

I'm pretty sure this is inaccurate. Liquid hydrogen contains about 1/4 the energy of gasoline per unit volume. (Liquid H2: about 8mJ/liter, gasoline: about 32mJ/liter. These are Lower Heating Values that apply to normal combustion engines).
By mass the LH2 has about 3 times the energy content.
For most purposes, LH2 is a highly impractical way of transporting and storing fuel for combustion.
Last edited: Sep 21, 2021

Thx so far, having given up on Hydrogen for continuous use, my question is more towards launching options, so looking into High pressure gas storage and small engine installation. My plan is to use Hydrolysis off grid in a one off. So all practical matters, no daydreaming here.
V

WonderousMountain said:
Thx so far, having given up on Hydrogen for continuous use, my question is more towards launching options, so looking into High pressure gas storage and small engine installation. My plan is to use Hydrolysis off grid in a one off. So all practical matters, no daydreaming here.
Click to expand...

If "launching" is for gliders, I would compare any off-grid hydrogen idea to simple solar panels, lead acid batteries, and a winch (leave the heavy, dangerous stuff on the ground and get better performance for less money). If there's a desire to take power aloft, then for modest requirements I'd think electric power will be much more practical than compressed H2. Don't forget to figure in the energy used to compress the H2.

Well, stop.
Not asking for comparisons,
I WANT A H2 thust generator!
V

Build a rocket. You'll have both fuel and oxidizer handy. Probably the simplest, lightest engine for making thrust from your desired fuel. But, well, efficiency isn't everything....
A

Jet engine, like the reeeeally nice 2 place trainer used to transition train for the Sonex jet.

or you could cheat and use Jet-A instead and save a lot of money. That does lose the fun of turning Sun & water into thrust. If you figure it just took longer...?

Myself, I would avoid cryogenic LH2 unless I was an Astronaut. Just assume a long rant here on the dangers, and The explosion at the Cambridge Electron Accelerator on July 5 several more references.

Of course, nothing is perfectly safe. See Scott Crossfield and the liquid Ammonia / liquid Oxygen X-15 rocket motor explosion on the test pad.

High density energy storage has dangers. Gasoline, Lithium Cobalt Iron, Uranium Salt Water, all have hazards and have to be dealt with differently, and there are still fires and accidents. I vividly remember the parking lot full of Fiskars that got flooded with storm surge salt water...
H

Aesquire said:
Fyi. Cosmic radiation is interstellar, not solar. It's Earth's magnetic field that regulates how much reaches the atmosphere.
Click to expand...

Image that, I thought the term Cosmic implicitly implied that.

This is an overview of the solar modulation of cosmic rays in the heliosphere. It is a broad topic with numerous intriguing aspects so that a research framework has to be chosen to concentrate on. The review focuses on the basic paradigms and departure points without presenting advanced...

Vigilant1 said:
I'm pretty sure this is inaccurate.
Click to expand...

H2 should work great with a valve-less pulse jet. You might have to adjust the tuning length, so please strap it to a go cart and take videos!

pity FAA regs really frown on dropping booster engines. Letting the white hot steel pulse jet parachute into a corn field might be a bad idea, come to think of it.

In really broad terms, the Solar wind directly affects cosmic rays on a System level, and the Solar wind interacting with the Earth's magnetic field the local level. Higher level of Sunspots and particle flow pushes on the magnetic fields and "compresses" them, giving a higher level of particle flux in the Van Allen belts, which blocks/diverts some Cosmic rays from hitting the atmosphere. Stuff gets really strange out near the Heliopause, and there is a distinct possibility that even gravity is different out there, but since Voyager 2 just left the room, we don't have a lot of data from very far out.

And I'm not anti-Hydrogen, at all. I'm practical. There isn't anyplace to fill up. Might as well run on unobtanium. If you live in LA or Vancouver or NYC, then I would do the calculations to see if I could afford to pretend I'm Green And Righteous.

And it's a pretense. Pretty much any source except Nuclear & Electrolysis is going to pollute more than just using gasoline. And since there isn't a Nuke Plant in commercial operation in my country that uses technology newer than my old bones, there's the problem of waste. Never mind Congress passed laws years ago to recycle & store this stuff, it never got funded, the safe storage was blocked by NIMBY Congresscritters. ( just like there's no offshore windmills in view near where other NIMBY Congresscritters have beach mansions. That they are some of the most corrupt and dishonest scum in the hemisphere is irrelevant. )

When/If they start a major effort for Thorium salt Safe Reactors and maybe solve some of the horrible pollution problems of Solar & Wind & the Severe Problem of Intermittent unreliable expensive and short lived gear involved, THEN I can drive a plug in, or Hydrogen vehicle without hypocrisy.

Doesn't mean I don't just live with the hypocrazy Now.

My Mother has a plug in Prius Prime, and went a year without adding gas. ( actually a bad thing ) And she runs the car on Nuclear or Water/gravity, or sometimes garbage. ( local power companies ) As far as she's concerned, it's just fine she doesn't ever have to stop for gas, and doesn't mind plugging in the car after a drive. She's never used another charging station outside her garage.

I chose not to get a plug in. Never mind the dying natives near the mines. I don't have a garage and don't want to spend the extra 8-10 thousand dollars. So I got a "regular hybrid" and treat it like a gasoline car. ( which it is )

The Good news is I'm learning how the systems work, and getting over 40 mpg in a fairly practical and sporty hatch is great.

The Bad news is that the Really Nifty drivetrain is probably a horrible match for airplanes. The Planetary Gearing is at heart just like the nose on a P&W R2800! Cool! But a very different system is needed for practical aviation. Either a "Range extender" serial gizmo for an electric, or the hybrid Rotax is developing.

I have two 33 year old Honda CRX cars that still get 45-50 mpg without the hybrid stuff and the hybrids double cost.
Think of how Honda could improve mpg without hybrid now 30 years later. Honda or Toyota should offer a non-hybrid affordable car that gets 100 mpg on the USA market. Where is it?
V

BBerson said:
I have two 33 year old Honda CRX cars that still get 45-50 mpg without the hybrid stuff and the hybrids double cost.
Think of how Honda could improve mpg without hybrid now 30 years later. Honda or Toyota should offer a non-hybrid affordable car that gets 100 mpg on the USA market. Where is it?
Click to expand...

The engine tech has improved since 1988 (esp the electronics), but the crash and safety regs have added weight to cars, too. Your CRX has no airbags, didn't take an offset impact frontal crash test, etc. Weight increased when roof crush standards changed in 2010 (which, together with airbags seemingly in every pillar, has significantly reduced visibility IMO). Emissions laws tightened up, too.​
​
If they could make a 100 mpg two seater that folks would buy (i.e. practical, not pricey and made of titanium), I think they would do it.​
Last edited: Sep 23, 2021

WonderousMountain said:
How much H2 (volume) is required to self launch a 500Kg glider to 1000M?
Click to expand...

ABOUT THIS MUCH DEPENDING ON THE HP YOU WANT! 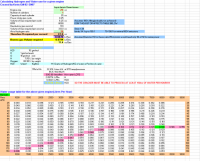 Vigilant1 said:
If they could make a 100 mpg two seater that folks would buy (i.e. practical, not pricey and made of titanium), I think they would do it.
Click to expand...