How to label Instrument panel

I appreciate the simplicity and design rigor of the approach, Choppergirl, though many will tell you that digital readouts without any analog indication are slower to scan and interpret. You have the know the limits in your head (or have them printed next to the LCD) and do the math. Not a problem for compass or altimeter but definitely an issue for the engine functions and airspeed.

One way to solve your labeling issue would be to use larger-size LED or LCD or OLED matrices. A larger six-digit seven-segment or alphanumeric display would allow you to have a three-letter prefix to identify each digital readout. Even without moving to graphic displays where you control every pixel, 16 x 2 character displays would provide much greater clarity in presenting information. For example, I have seen a number of examples of folks making oversized digits on a 16 x 2 display, usually just to make big numbers, by using character tiles. Similarly, you can use a few custom characters to create bar graph tiles, with the bar flashing if out of limits.

If your oversize numbers are the 3 x 2 variety, then that would leave you with a 7 x 2 display for labeling and the bar graph. If they are the 2 x 2 variety then you've got 10 x 2 leftover. Leaving one blank space for clarity, you could still have "ASIKTS" and a six-character bar graph or "ASI KTS" and a 9-character bar graph in front of your oversized three-digit display. The bar graph could be something as simple as a bar that grows left to right or a fixed horizontal bar with a vertical line that moves left and right. The nice thing about his approach is that you are still only sending character sets to the the controller, so there is not as much drain on the processor as if you were addressing individual pixels.

Of course, once you start doing this for several functions indicators, you may find that the multiplicity of separate displays and wires, while giving a great retro look, are actually a lot more trouble and more cost then driving an single display. Something like this monochrome 128 x 32 OLED display would allow you to display six double-height, three-digit indications with smaller labels and bar graphs all in one 2.5 x 1.1" package controlled by four or five wires from one Arduino controller.

On the glasses, since I am blind as the proverbial bat without mind and don't like contacts, I suggest something like these -- http://www.bobster.com/spektrax-convertible-3-sets-of-lenses-prescription-insert.aspx -- for open-cockpit flying though there are of course many more styles to choose from in the motorcycle world.
Last edited: Feb 28, 2016

Silver sharpie looks great on black....... All good mechanics should have one in their box. (imho)

HomeBuilt101 said:
What is the best way to print letter on an aluminum painted Instrument panel?

What is the best way to paint the panel (epoxy paint)?

Have it professionally done. Get a shop to paint it, then have it silk-screened. While powder coat is good, the silk screen does not stick to it as well as paint. Look at my panel in the thread $46,000.

Do not use any "stick on" labels.

I'll bet you didn't use Rustolium either :-D

I did. Both of my instrument panels are painted with Rustolium. Remember, I'm cheap

I've a friend who did the silkscreen method on a very stuffed panel; a huge undertaking with graphics. After it was stuffed and installed it was discovered that vacuum was misspelled "vaccum".
https://www.flickr.com/gp/125356136@N02/7RX6nW

No, but I am using Dupli-Color DAP1690 self etching primer spray paint in the majority of my cockpit, sidewalls, center panels, etc. It looks period correct, and is easy to apply.

It looks awesome, no question, but when the equipment is updated or you need a breaker "re" labeled.... Just playing devil's advocate because most airplanes aren't built with overhaul considered. I admire craftsmanship and you have a winner! I have a simple tool that gets greasy hands treatment and a peel and stick upgrade, you're going to be flying a piece of art and certainly have my admiration! Rock on!!!

Mark Z said:
It looks awesome, no question, but when the equipment is updated or you need a breaker "re" labeled.... Just playing devil's advocate because most airplanes aren't built with overhaul considered. I admire craftsmanship and you have a winner! I have a simple tool that gets greasy hands treatment and a peel and stick upgrade, you're going to be flying a piece of art and certainly have my admiration! Rock on!!!
Click to expand...

We did allow one blank CB space for future growth. If and when that were to happen, the shop would pull the panel and silk-screen a new label. Hope we do not have to do that!

There are also fairly cheap DIY laser etcher builds and kits out there..

In EASA land, everything gets labelled. I inspect a lot of homebuilts and there is a huge variety of ways and means used to label switches, apply warning cards, define movement of levers and so on. Some of the stick-on lettering stuff is very good but suffers the flaw of falling off over time, especially Dymo tape. With regard to labelling the movement of levers and push buttons, I recall a funny one where I was flying the non-pilot builder of a Zenith 601 HD, with it's nice big bubble canopy on a sunny day. We took off and got on our way and soon we were sweating like sweaty people in an underground railway carriage. We cut short our flight and landed back. As we were walking back in, the builder says "let me check which way the cabin heat operates". It turned out he'd had the cabin heat lever in (on) so we were cooking ourselves and the lever was not labelled for it's correct operation, so a Sharpie was found and "Out for off" was written on. We flew later when we had cooled down.

You can just varnish over the Dymo tape, which then make it resistant to falling off (a form of edge sealing) and also prevents cleaning products such as MEK from removing the test (This is how I normally permanently mark repairs in airliner fuselages also works over a sharpe).

Alternatively you could go to graphics house that uses 3M Control Tac 180 (it meets FAR 25 burn regs and is the standard stuff they use for truck graphics) and just get them to print a whole cover for the instrument panel.

I hate Rustoleum. Last time I used it about 40 years ago it lifted the prepped enamel finish under it. Maybe it's lacquer based? Anyway, it'll lift some types paint.
Krylon or Walmart here.
D

I started out with Aircraft Engravers (www.engravers.net). In addition to door handles and fuel caps, they made some overlays for my subpanels. Vinyl with an adhesive backing.

Then I went with frontpanelexpress.com and got them done in aluminum (sorry for the poor quality picture. it's a screen capture from a video)

You could also get laser engraving plastic (thin layer of colored plastic over thicker layer of contrasting color plastic), and use a local hackerspace's laser to engrave them.

So, here's an easy, low tech solution for panel labels, passed along to me by a good Cozy IV buddy.
You can make this look very good if you're careful, and it has the big advantage of being very easy to change. I've got lots of time on my airplane now... and I've had maybe a dozen different small changes to my panel through the years. If I'd printed onto the panel, I'd have had to find a way to change it within the first year...

Has anyone considered using the techniques that the "sim pit" builders use to fabricate backlit panels and markings? There are tutorials on several online forums that basically replicate MIL-DTL-7788 panels. Using engraving equipment at a local hackerspace would bring the capability in reach of the budget minded. Viperpits.org is a favorite resource of mine....

Would appreciate hearing any home-brew experience of fabricating and integrating such components.

New to these forums and haven't searched out existing threads that may have covered this topic.

Just sent an email inquiry to Aircraft Engravers. A mod was made to my panel, moving two CB's. I need new labels, that look professionally done. 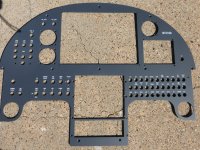 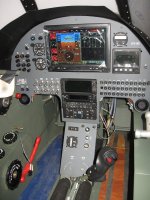