How To Clean Out Pitot Tube...Looking For Advice

My pitot tube got blocked with some kind of bug residue. It is not the typical mud type blockage but looks more like bee pollen.

After I remove it I wanted to get some advice on how to clean it out.

I tried to blow it backward from the ADAHRS downward to pop the blockage out of the front of the pitot tube however my compressed air would not blow through so I need to remove the unit and clean it somehow without damaging it. The AOA probe is also plugged.

It's amazing I'm in the hangar practically everyday you think I would have noticed some bugs digging in there. Shoulda Woulda Coulda kept the cover on it
H

I think that I got it figured out!!!

I lowered the pitot probe from the wing and placed the dangling pitot probe in a bucket of hot water and waited a bit. Then I used compressed air and shot it down from the open end of the flexible tube from where the ADAHRS connection is and finally the blockage was opened up just a bit and the water soaked back farther and then I did the compressed sir trick again and it acts like a pressure washer for the inside of the tube...
P

A few years ago when I was flying gliders out of Minden, I encountered a type of wasp that could completely fill a pitot tube with leaf bits and goo in about 20 minutes. I tested the pitot, found it blocked, unplugged it, and it was plugged up again 20 minutes later when I took off. After that I took to being more careful about using a pitot cover.

...I've also watched a friend blow the bellows and glass lenses out of all the static-connected instruments by pressurizing the wrong tube trying to clear a pitot clog. It calls for some care.

I hangar my plane but I still use covers for the my pitot/static port, LRI probe, & fuel vent. I also put plugs on my exhaust to keep cool air out of the engine after shutdown.

I chock my airplane when it in the hangar. It's something I've always done.

Recently a friend was working on his plane and was pulling off some old wing walk material. Unbeknownst to him the airplane was rolling backward as he pulled furiously to remove the sticky stuff from the wing. He realized what was happening when he heard a thud that left a cute little dent in the trailing edge of the rudder as it struck a crossbeam on the back wall of the hangar. Arrggghhh!

carb on a bench ready for install everything clean as a whistle - Put the gasket over the studs and looked back at the bench only to see a bugs butt disappear into the inlet fitting.....

Bugger had packed the finger strainer full - Never saw him busy - He never saw it coming.

Daleandee said:
I hangar my plane but I still use covers for the my pitot/static port,
Click to expand...

Some people have been known to leave the pitot cover on the tube during flight. Keeps the bugs out quite well.

BJC said:
Some people have been known to leave the pitot cover on the tube during flight. Keeps the bugs out quite well.
Click to expand...

Haven't done that one yet ... but I did get water in the line once and the ASI would only read 35 mph in flight. I was washing the airplane and I can only guess that the stream of water opened up my self opening pitot cover that was on that particular airplane: 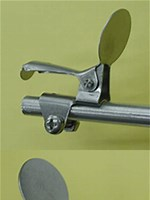 But I managed to make it around the patch and get it back on the ground without buying anything so I guess that "position of the nose in reference to the horizon" thingy does work ... as my instructor said it would!

Blocked pitot war story..... The 2 seat Jabiru has the pitot up at the top of the fin, the pitot cover was fairly loose on this one, so it was easy to get on and off. When I took it over based in Tanzania it hadnt flown for a while, through a wet season as well so..... Taking off for the first flight, grass strip which was only just long enough and 5000 feet elevation, you guessed it - no ASI! Since this was also my first flight on type I decided a couple of stalls to find out what slow flight felt like and go land at the main airport on the other side of town which had a 2 km runway.

In Tanzania we often had issues with bugs crawling round inside the pitot cover to build a nest inside the tube, since the covers are loose fitting to be put on on the end of a long stick there is plenty of space. Luckily with 2 independent pitot systems most times only one side was blocked.

As for chocks in the hangar, I was taught chocks in and brakes off, that way if there is a fire the chocks can be kicked out and the plane removed, not so easy if the brakes are on and tthe doors locked.

Some thoughts:
* I have rotated on take off and found myself doing zero miles per hour! Fortunately, I knew that 150 well enough to get it back on the ground.
* Added "Take pitot apart and check for blockage" to my check list. Did that until I sold that Cessna.
* Use a cover on the `coupe. Added "Check pitot cover in place on hat rack" to my check list to be sure it is there.
* A check list improves with age - like fine wine.
M

OTOH, my C-185 checkout was notable for the requirement that I do a full flap go around and return to land without the airspeed coming off the peg.

Some diabolical instructors lay awake at night thinking up such things.

Does teach you to "fly the wing" however!