Background: Im already running LED position and landing lights, but my ACL system is still based on the familliar HID power supply and flash tube "strobes". The flash tubes are discrete units mounted outside the OML of the tip and I'd like to keep it that way. I have a bad power supply and one channel is dead. Its probably a $0.25 component burned, but the writing is clearly on the wall - flash tubes and power supplies are on the way out. I thought about switching over to the "automotive" power supplies which were so prevalent just a couple years ago, but they too are now all LED.

So what Im looking for is a LED strobe that will put out "near" the 400 candela that the aviation guys offer, but I just want the strobe head itself - not the built in position lights. Frankly, I'm looking for the analog to the automotive show car/emergency response products that have been around for decades - only in LED.

Anyone know of such an animal?

I'm using these on the JMR. One on the top of the rudder, one on the lower fuselage below the stab, one on each wing tip. 37 different patterns. or all on the same pattern. Also with LED position lights.
Read the user manual.

I don’t have a product to recommend, but be cautious of LEDs that operate on a wide range of DC input voltages. Many use a chopper power supply that can create static in the aircraft radios.

Please let us know what you end up using.

What I have noticed with LED is the flash is slower. My brain at least sees it as Extinguish instead of flash. The count is slow so you see the light , see the light and then it goes out. My brain goes, that light went out. That is where I pick up on it. It’s not a stab like the standard flash. They don’t seem as bright yet they seem to show up better. At least my experience with certified ones. I would be checking the superbrightled site for off the shelf stuff, like pops used.
J

On my Kitfox 4, I used the whelen lights, but removed the strobe lights and replaced with 3 LED fog lamp bulbs. I used a automotive LED turn signal flasher to flash the lights. They are pretty bright. I actually replaced the position lights with LED aircraft bulbs I got on Amazon. They cost about 45. I didn't have $75 into the whole set up. The also make flashers that you can adjust the speed of the flash. Lites and flashers on ebay. Couple of pictures plus a link to a video I did. Remodeled Whelen strobe and position lights - YouTube JImChuk

I built my own system for my RV7. LEDs are cheap and available off ebay, but if you're not inclined that way you can use some of what I did. Rock lights and an LED strobe controller Strobes N' More LED Flasher - StrobesNMore.com (strobes and more LED flasher if the link doesn't work. $25) 4 Pods LED Rock Lights Kit, Ampper Waterproof Underglow LED Neon Trail Rig Lights for Car Truck ATV UTV Baja Raptor Offroad Boat Trail Rig Lamp Underbody Glow (White), LED Light Kits - Amazon Canada (Canadian - and if that link doesn't work, just go to amazon and search for rock lights) The controller has a couple of dozen flash patterns, I went with a 3 pulse flash, and can also be wired to have a steady on function while taxiing. I used 2 rock lights and 2 - 5 watt LEDs suck into the nav lights on each side and they are bright as heck. I called the tower at 5 miles and asked if they could see them and they said they were clearly visible
R

Aveo Powerburst on my Savannah.


Not expensive and highly recommended

Pops - I use one of those little strobes on my Rocket and while I think they are GREAT for general ground hazard and visability, they dont come close to the 400 candela required for ACL.

Rollerball - The Aveo products you have are compelling, but they have built in nav lights. I hate to pay for an all in one solution when I only need the strobe portion. But they are on sale at Spruce for less than $400 bucks, so thats probably a cost effective solution.

What I REALLY need is the form factor and cost of the mini strobe Pops mentioned, with the output of the Aveo shown by Rollerball. It seems likely that the show car or Emergency vehicle market will eventually adopt the really high output LED strobes, just as they did with the same flash tube technology from aircraft.
T

The LED strobes on the police cars in my town are blinding when on high. They have low medium and high. At night high is too bright to be close to. Medium is perfect at night. They are out there in some form.
R

The company Moosedude linked still sells old school strobe gear, including Whelen branded stuff, if replacement is worth consideration. They also have this:
Strobes N' More E91 Hide-Away LED - StrobesNMore.com
if it seems bright enough & will fit in your housing.

One option would be to roll your own, using two or three high quality LEDs like Cree. The ones that Moosedude linked have three Cree XBD LEDs in each light, and the XBD is rated at something like 300 lumens each.

Thanks Charlie. The E91/E92 products might be worth purchase just to play with. That's getting close to what I need.

My airplane has a unit that was previously used on county equipment (including state school buses): 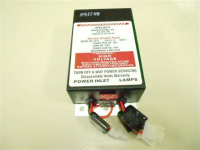 They work well but I don't believe this particular unit is available new (although I just bought a NOS unit) but they can be found online and at some of the Hamfest events. Made by Specialty MFG and drive two strobes.
F

I'll be using 10W LEDs 1000 Lumen 10 Watt Super Bright, Cool White LED Module | MPJA.COM
One in the tail that doubles as position and strobe light.
Two in each wing tip. The ones facing to side as strobe only and the ones that face forward will double as extra taxi/landing lights.
In the attached schematic for the tail position/strobe , the LM324 can be be replaced by LM358, for example. I just used components I had laying around. Thus the old transistors.
Still finalizing the electronics for the wing strobes.
Spec sheet says 1.5 amps max peak, but I still feel they could be driven harder for 1/10 sec. I guess I should have bought one extra for testing

I do have one question. I seem to remember a requirement for strobes of the minimum number of Joules, but I've been unable to find that now. (I built the strobes for my RV-3 back in 1999 using flash tubes).

Quick question...is it even necessary for ACL installations on on E-AB aircraft to meet any particular standard if used only for day VFR when ACLs are optional anyway? Also, is a single red beacon on the rudder still an acceptable installation for day VFR use?
R

I'm not aware of any rules whatsoever about lighting requirements for day-vfr homebuilts. One of the RV4s I owned never had any external lighting at all.

Beacon is preferred but not required for Day VFR. Might as well put the position in for sunset patrols. I know a couple of people who have tail light LEDs in the position lights. Just as visible. You do have to minor modify the bulb base if you have certified airplane sockets. Airplanes reverse the tang placement from autos.

Thanks, all. I suspect that any decent LED brake light bulb and a turn signal flasher for LEDs would actually be brighter than the old red beacons on vintage Cessnas.
R

Here's what is on the FAA website; 1st hit when I searched:
AC 20-30B - Aircraft Position Light and Anticollision Light Installations – Document Information

It's pretty old; pre-dates the 1996 rules change that requires type-cert a/c to have anti-collision lights during day VFR.

FWIW, it says "400 candles", with coverage specs. I'm not going to attempt converting that to lumens; you're on your own with that. ;-)

rv7charlie said:
I'm not going to attempt converting that to lumens; you're on your own with that. ;-)
Click to expand...