rv7charlie said:
Where/how does it mount? If it's basically a cube shape, there are off the shelf options.
Click to expand... 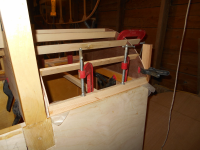 DO YOU KNOW OF A MANUFACTURER WHO MAKES A FUEL TANK OF THE SHAPE UNDER THE CAGE LIKE IN THE PICTURE?

SINCE IT SHOULD MAKE PART 103 WEIGHT, YOU'LL BE LIMITED TO 5 GAL. PERHAPS ONE OF THE ULTRALIGHT SUPPLIERS LIKE LEADING EDGE AIRFOILS HAS AN OFF THE SHELF POLYETHYLENE TANK.
A

You haven't given ANY numbers other than capacity, so which of these you like I wouldn't know.

I personally prefer plastic, strapped down, marine type tanks with a handle, if they can be removed. That allows a hike to the gas station to get flying again if you land out. If a semi permanent part of the craft, go for the lightest.


Don't know about cupped hands, I usually use them on the controls.. But a 3 gallon plastic tank fits nicely in a seat pack. More important for 2 stroke engines is oil bottles well secured. Modern gas stations may not have appropriate oil.
T

I don’t think any of that will get the fuel where it was designed to be on that aircraft.

I occasionally weld aluminum fuel, oil, and water tanks up to order.

Lois said:
If it is a Part 103, I have seen where builders built a shelf that incorporated a seat belt. Then used a portable 5 gallon marine fuel tank with a handle and quick disconnect. Ran the seat belt through the handle and sinched tight. Since the tank is not a permanent part of the structure of the "not-an-aircraft," it does not count against the permissible 254 pound empty weight. (Neither do removable custom seat cushions used to permit two "non-airplane-pilots" of differing sizes to fly the same craft without resorting to heavier adjustable seat mechanisms. If you are strapped in the cushion is trapped in place.) Alternatively Univair, Aircraft Spruce, or ??? may sell a light weight aluminum or polyethylene unit that ends up being lighter. The trick being to get one that is no more than exactly 5 gallons.
Click to expand...

Lois said:
So long as you NEVER attach it yes... The same way I can own a 10" barrel and upper receiver but I need a Federal Tax Stamp to attach it to a lower receiver and make a SBR. Rules be rules, whether they make any sense or not.

Polyethylene is light. Having a removable fuel tank likely saves scant weight, but it's really convenient. But while there is no specific list of equipment that "must" be carried on a Part 103 "not-an-aircraft" there are things that "bust" it out of Part 103. Fuel capacity over 5 gallons is one of those. I know somebody who has two five gallon "football" tanks hung from the jury struts on a parasol. But there is only one set of equipment to feed the engine. At some point the "not-a-pilot" lands and swaps the footballs.

Likewise one can carry a five gallon gas can-- secured with bungees or a strap-- in the baggage compartment and refill when convenient. There is no rule limiting how much fuel you carry, just how big the tank is. Same with a clock, mount it on the instrument panel and it counts as part of the empty weight. Wear it on your wrist it does not.

There is no requirement under 103 for any gauges, airspeed, altitude, compass. Personally, if weight were tight I'd just have an EGT / CHT, calibrate the throttle on the ground, and use smartphone apps for the rest. Mount a bracket for your device on the panel, the mount counts against the empty weight, but a cell phone or tablet in the mount does not.
Click to expand...

Lois, maybe I'm late to the party, but what does the graph with the different colors signify? Just curios. My state's white. Should I move?

speedracer said:
Lois, maybe I'm late to the party, but what does the graph with the different colors signify? Just curios. My state's white. Should I move?
Click to expand...

White, wow... It means they are predicting beaucoup snow...


Actually, it's https://visitednorthamericamap.com You can click on places you've been and it creates a map you can export. Another for just the US is https://visitedstatesmap.com

Their site says they will not make tanks for aircraft. I have a tank made by them and it is very heavy. Replaced it with riveted sealed tank.

tlcasey100 said:
IT SITS UNDER THE CAGE STRUCTURE SHOWN. IT BOLTS DOWN TO A FLOOR NOT YET INSTALLED
Click to expand...

Lots of fuel tanks available online. If you have dimensions, posting them would get you better answers. Or, you could just do an internet search....

You will have to get a lot more specific about the shape and dimensions of the tank than just throwing a photo out there. We do not know what the width, length, height, or what the curved shape is, and that is needed. Maybe if the space is to the plans, you will find a supplier who makes tanks to the plans.

OH, and if you turn off the CAPS LOCK, more people are inclined to help. That is two moderators asking...

No problem, go to a frat house & ask where to buy a Keg.
Take it to a Machine shop, have four made & sell three.

That's why Welding is in,
CK LouPai
R

I've got an empty keg in my stash. He won't like the weight, even cut in half.

Formula 4 sports cars and lightning class sail boats are both constructed under strict specifications that are adhered to by those who build and enjoy them. I suppose one could either accept the 103 challenge or fly light sport.