MikeW do you have some more details about the tractor version you had in mind before you came up with final pusher variant?

In collusion with @Victor Bravo , I've tossed some reworking at the AiRecliner and added forward-swept wings with L.E. Slats and Junkers Flaps. I figure I can also stuff a Gluhareff Pressure Jet into the Vertical Stabilizer for propulsion... 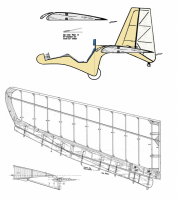 The flaps and forward sweep will give a powerful pitch down. How do you propose to counter that?

Junkers 'Flaps' is a misnomer, for one thing. They are the control surfaces, not necessarily 'flaps', in the conventional sense.

Actually, the L.E. slats and slotted flaps should create more lift, rather than pitching 'down'. The forward swept wings are known to reduce low-speed stalling, maintaining lift...

Since this is a powered sailplane, rather than a high-speed race plane, I really don't see a problem. As with anything, judicious use of the controls, rather than being heavy-handed should be fine.

Of course, since it can be modeled as a glider, there is no reason not to. Given the miniaturized servos available and a battery stuffed into a 'pilot's' torso, should help with preliminary weight and balance testing, as well
M

I would suggest that you build it as a model airplane first to see how it flies.

I believe I said that...

Better rendition, showing placement of the LE Slots and with the Junkers Flaps aligned... 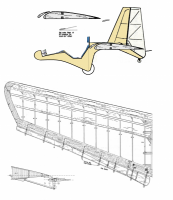 These X-57 pods developed by (or for) NASA may be the cat's meow... Folding Props with minimal drag, ~15 HP equivalent, each...