So, I printed out the HM293 single page plan. While on a conference call I cut out a simple foam board chuck glider. During the trimming/balancing phase, I had to decrease the rear wing incidence to be basically flat to get it to fly. I did NOT make the the front wing a free-wing. It flies pretty well.
My shower thought is this:
How would a small aircraft like this work out with a fixed front wing, and typicall controls on the rear wing? I'm aware Mauboussin did it on the MB40 but the layout is much different. I'm considering scaling up to a larger size model (3-4 span) and seeing how it works out. In particular I'm curious how the stall behavior might work out. I guess if you get the incidences right, it should be fine, otherwise, crunch. If correct, it might be a neat little compact airplane. 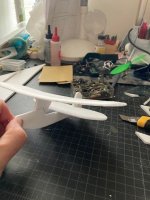 The full scale Fleas that I flew or worked with, flew the rear wing at about 2.5 AOA at cruise. This is due mostly to the reflexed air foils. typically the 23015 and I used the 43015 . In my friend Jacks 293 , the wing is bolted to the longerons.
In my case I could change the rear wing AOA with shims. Optimal was getting the best landing angle, and line of sight.
For Jack's plane, raising the rear wing AOA about 1 in made for a tiny bit faster cruise , as the fuse was cleaner in the air.
Pitching the rear wing instead of the front wing presents alittle bit of loss on take off character.
The tandems fly so easy. Set the pitch to about 12, hit power and up you go when the speed is enough to lift the nose. Pitching the rear wing negates a lot of this. You will have to set the static AOA near 12 of course , semi conventional .
There is no reason it will not fly , as once the wings are airborne , pitch is pitch.
Pitching the front wing , the controls are short and simple ..
One really nice aspect or pitching the front wing is that you can fly @ 3 ft for 7000 ft .
Pitching the tail bounces the tail wheel off of the ground, trying to keep 3 ft.

billyvray, you might want to do some digging on the Lacroix Autoplan series of designs, development of which was derailed by an accident apparently unrelated to the configuration. They were essentially tandem wings that look like Mignet types at first glance but in fact used fixed incidence wings with ailerons on the front wing and elevators on the rear wing. Here are a couple of pics: Flying Flea PIREPS

In tandem airfoil configuration or multiple-lifting-surface layouts, due to the flow interaction among their lifting surfaces, the aerodynamic characteristics can be affected by each other. In accordance with Prandtl’s classical lifting-line theory, a method to calculate the section lift...