Today I went out to do some performance testing on my Hatz, as I need accurate numbers to spec out a new propeller. The results were mixed and surprising.

First I checked the airspeed indicator with a homemade water manometer. It showed the ASI was dead on between 50-100 knots.

Next, I flew while recording the flight on two different GPS devices: my Android smartphone with the GPSLogger app running, and an older Garmin 60CSx, which includes a pressure sensor for more accurate altitude measurements. The test sequence was a 3 sided triangle at constant airspeed, from which I could calculate true airspeed using the Gray method, and then a series of climbs at different airspeeds to determine Vy. It was a good day for it, nearly a "standard day", 60°F and 30.17" Hg, with a south wind off the ocean, the airport about 7 miles inland was reporting 9G15 but over the coast it was smooth as glass. I was alone in the plane and I took off with a half full fuel tank.

This is the track as recorded by the phone analyzed with a program I've been developing:

And the same sequence as recorded by the Garmin:

Two things stand out here. First, the Garmin plot is a lot smoother as far as altitude goes, which isn't surprising as GPS altitude isn't terribly accurate. Second, the phone track has a lot more data points, potentially giving more accurate results for position, though the analysis program I'm using only uses the start and end points for each range. Still, the results are pretty close, though the program has a bug and doesn't report the wind speed correctly (the reported TAS is calculated correctly, though). I was flying at 70kts IAS, so my ASI is indicating 1-2 knots slow, probably within the realm of measurement error. However, I goofed when flying the track, it should have been closer to an equilateral triangle, so some accuracy will be lost there, though not as bad as it would be if the tracks were perpendicular to the wind.

Next, the climb sequence. The original plan was to climb 1000' at 60, 65, and 70 knots, which I did, after which I decided to add 55 and 50 knots. The ranges selected here are in speed order, not the order in which I flew them (ignore the displayed TAS and wind here, the program automatically uses the first three numbers, which won't work with [nearly] parallel tracks):

These results surprised me. My Hatz stalls at 45 knots indicated, which is higher than generally reported, and I've been using 60 knots as my normal climb speed, for a comfortable margin over stall and a reasonable pitch angle. But I got the best rate of climb at 50 knots indicated, with decreasing numbers the faster I went. At 50 knots the plane is really hanging on the prop, way above what you'd consider a "normal" climb angle. I really expected the points to form a curve peaking somewhat above stall, but these numbers look more like the way ultralights behave, getting best climb just above stall.

To do: Fix the program calculations for wind speed (the calculated TAS agrees with the spreadsheet version, only the displayed wind speed is wrong), and re-fly the sequence with a better laid out triangle. And redo the climb sequence, just to confirm. I also figured out how to set the Garmin to record more points. Checking the static lines for leaks would also be a good idea, the manometer test verified the pitot line isn't leaking. 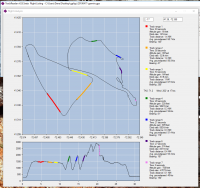 With a better track, the calculated airspeed is almost exactly the same (and the calculated wind direction is also working now), within the limits of error from the 70 knots indicated. The climb results (at 50, 55, and 60 knots) are also similar. The last highlighted segment was a 3 turn spin, 4707 fpm down! I don't know how accurate that is, though, given the short time span and probably pressure changes in the open cockpit affecting the Garmin's pressure sensor.
You must log in or register to reply here.
Share:
Facebook Twitter Reddit Pinterest Tumblr WhatsApp Email Link