True, Erkki, but the Cordouan was the last design that Avions Mignet produced before they went under. I don't have all the facts, but if *I* were being cynical, I might say that the Cordouan contributed to that demise. By trying to appeal to a broader audience with a 3-axis Pou-du-Ciel, they ended up with a pleasant enough plane with good low-speed handling but otherwise more complex and expensive and less efficient than a conventional monoplane, so why bother? Once again....

I prefer not to call a three-axis, tandem-wing design "Mignet" or "Flying Flea" or "Pou-du-Ciel", not because of some sort of religious zeal, but because it ceases to have that simplicity and ease of piloting that Mignet was so passionate about.
Last edited: Dec 13, 2019

The Piojo is ideal with the two concepts, either as a pure flea as a two axis controlled bird or a 3 axis flea with the ailerons on the rear wing outer panels.
The basic design remains for both configurations.

Would a fuselage made of wood, similar to the SG38 or AP withstand the forces of the front wing, in the region of the seat?

The Piojo is already narrow but could it be made even narrower? 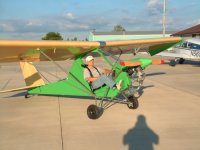 Built narrow as this one!?
S