Finished the first sheet of the original plans. Started with the second most complex and the most important. The process really made me appreciate the advantages of modern digital drawing.

Unfortunately the files - even reduced quality JPGs - are too large to up load or I'd post the first finished example. Best I can do tonight is a screen print of the before and after

Second sheet finished. 37 left.
The rest should go quicker because I now have a 'system' and I'm trying to do the hardest first.

Moved a few things around and added a few notes hoping to make them less cluttered and easier to read. May try to get a full size print done to make sure everything is readable on real paper.

Project has taken a downturn in advancement due to the weather. It is Spring in the Rocky Mountains. That means I have time critical tasks to get done outside and that is taking a bunch of time. So.....................
I've decided to take a small step back. In the interest of not slowing things down too much on my end I've decided to make a digital set of the original plans, as sold by Falconair, available. I have the originals cleaned up enough that they are actually usable. Just as soon as I get the drawings completed for the minor additions to the original wing structure that will be required for the AV-361 MK II and the AV-361M I will make them available as a download, or as a mailed USB stick. Price is not yet locked down, but probably about a fifth of the Falconair cost.

Website has been set up and a quick 'splash' front page posted. Last time I set up a web site was with Win XP and Frontpage Express. Small learning curve, but still far cheaper overall, including my time, than the multi $grand$ the local web site designers are asking for a basic page with a PayPal link.

Due to multiple parameters in my life, some of which none of us have control over, it has become quite obvious to me that I'll probably never be able to build an AV of my own. This means that there is no way I can ethically offer any plans to an aircraft that has not been built and properly tested. Maybe someday in the future.....................?

So rather than create yet another dead end for the AV-36/361 flying wings I've decided it is time to make the plans available to those that may have the desire and facilities to build one. Preserving the design and the plans was always a significant part of my motivation, though making a few dollars would have been nice.

Plans are now available for download under a Creative Commons License for non commercial use. Donations via PayPal, Bitcoin or Ethereum will be graciously accepted. No support will be provided for the free downloads. Funds generated will be used to maintain the web site and the related flying wing website at GroupsIo

A little less than a year after that last post:
My situation regarding building an AV-36 has changed very little. The desire remains.
There have been a little over 1000 visits to the download page so hopefully someone is getting some value from the plans. I truly appreciate those few that have donated via PayPal. It has paid for the hosting service.

So, how do I scratch that AV itch? Accept my limitations and find a different solution. Over the last many months that solution appears to be what is a clone of the Debryer Pelican.* I do have room to build something like the Pelican. A Pelican clone will never be as good as an AV-361 at soaring. But........
Starting from a relatively clean sheet it is turning out to be much easier to design/build with a fuselage that integrates power, a slightly less complicated control system and the all important steerable landing gear for ground maneuvering.

That brings me to today's post. Rather than start a new build thread for my version of a Pelican Clone I've decided to graft it on here.

My initial thought was to design the fuselage so that it could be a 'bolt in' substitute for the original AV-36/361 wing with a simple widening of the fuselage and the addition of some hard points in the original spar. The Starling**, as I am calling my version of a Pelican clone, still uses an identical root rib and spar dimension but I like a side stick. Adding a steerable landing gear also meant either using a tricycle gear or a convoluted center stick control system to make room for a glider like bicycle gear. I have chosen the bicycle gear with a steerable nose wheel..............mostly because I just like a side stick.

The problem with a side stick is that it limits the control forces that the pilot is able to apply and the stock AV-36 control surfaces just won't work with a side stick. The original top hinged ailerons could be modified but the elevator was still a road block.

At this point I've kind of given up on the idea af a straight 'bolt on' fuselage for the AV-36/361. If one wanted to build with modified ailerons and elevator along with moving the root ribs out another couple of centimeters, to fit modern US pilots, then the Starling fuselage might still be an option.

Basic guiding parameters have been:
Tow-able with under 10 minutes from trailer to pre-flight. Anything less is almost a deal breaker for me.
As little wood needed as possible to build.
Powered by a converted industrial V-twin, or other engine of similar or less weight.
Enclosed cockpit
Steerable landing gear
Better than average crash protection than a typical small plane of this type.
Part 103 legal if built very light.....................at this point in the development I'm guessing about a 30% chance of that being possible. It WILL be heavier than the Pelican.
Able to be built in a a typical single stall garage, with storage space for completed large components and final assembly in another location.

This is where the CAD is at the moment. Getting close to moving on from the 'does it fit' stage (I've still got rudder cables going through the elevator servo system and a whole lot of 'place holders' from my CAD junk drawer) to actual component design.

Small amount of progress this week.
Figured out the servo/trim system for the elevator. Still need to modify the CAD to add parts to eliminate the potential single point failure of the trim push/pull cable breaking.

The 3D printed parts have turned out quite a bit stronger than I had expected. Printed with a better filament (temperature/creep) I have no doubt they can be airworthy parts.
Spring constants and lever ratios should be easy to change to adjust control feedback. Elevator mass balance will attached here.
++++
Rudder cable system now doesn't occupy the same space as anything else. I still need to figure out how to build the rudder control horn mount so it can actually be built and serviced.
Nose wheel steering not yet drawn in CAD. Maybe this weekend? 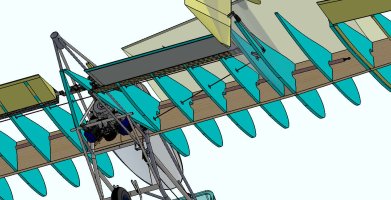 Retractable gear is being used for now just to reserve space if that option is selected. No way will it be possible (at least by me) for a part 103 weight, even with the 'chute allowance. The nose wheel steering system planned will work either way.
You must log in or register to reply here.
Share:
Facebook Twitter Reddit Pinterest Tumblr WhatsApp Email Share Link