I really like the Enstrom helicopters. What a shame! Unfortunately, the drones seem to be taking over the uses for helicopters now.
Was the problem not enough sales, inefficient manufacturing, inventory control, Management problems, union problems, certification
or other problems that can go wrong in a complex manufacturing environment?

TFF said:
No. The production certificate is not IP. It is the steps spelled out at the factory to build one accepted by the FAA. Location, placement of tooling, employee training, materials. The FAA grants that and if you loose it, it’s starting all over. I have a friend who bought IP for an STC. He is having to go though this. What happens is you can’t make the money back for what it costs to recertify.
Click to expand...

So if you have to re-do all over again the production certificate is pretty much worthless. Only the IP is valuable.
D

Any market for EA-B helicopter kits? Looks like MOSAIC might allow 100% quick build kits.
I see almost all factory RV-12 are ELSA. I guess for owner maintenance.
A

I don’t think all is lost if the bankruptcy goes right. Hopefully it will put it all straight. That is what us Enstrom users are hoping for. It could go wrong too.
Click to expand...

Problem is, board asked for chapter 7.
Which means liquidate to pay (%, if necessary) existing debts & stakeholders (if anything left)

So the only way it can go forward is if some of the current stakeholders or a new owner buy it out of bankruptcy whole. Perhaps shed of debts & legacy employment practices.

Enstrom’s biggest problem was Enstrom. They always wanted to be elite hand made toys, at least the last twenty years. The Turbines sold well to foreign governments because they gave such a good warranty. They would be totaled before the foreign government had to really work on them themselves. The foreigners are really hard on equipment.

When the old CEO retired, there was no one to keep the hands out of the Chinese cookie jar. He retired for different reasons but he could say no to the Chinese; they didn’t like it but respected it. After he left, They were cash flush, but use to being poor, as a company, the departments spent money on gadgets and gizmos that were not going to make them money. Then the rotor head AD hit which the FAA ripped off the owners. They did a two face deal. It really hurt the older helicopters because they had to spend a good chunk to keep them serviceable or be worthless. They had projects that were under control and then money wasted on them. The Chinese thought money would solve all problems too and kept giving it to them.

The production certificate is like your pilots license; it’s a license to produce. If you loose it all the way, you have to start over. The bankruptcy judge will know this and entertain the offers to keep it together. They are going whole hog with chapter 7. That’s the only way to get rid of the Chinese, but is also the most dangerous because it all can be broken up. If they had gone 11, the owners and union can hold it hostage, because it can’t be broken up; there would be no way to shake the debt. I know last year there was someone who offered to buy it at asking price, but the Chinese wanted to raise it after setting the hook. They said no way to playing games and backed out. What will happen, I don’t know.

EAB Enstrom? F Lee Bailey( name drop, only time I met him)told me he tried to buy one in parts to build one, but they wouldn’t sell it to him. He owned the company during the 70s. There is already a Sikorsky S-52 homebuilt. No barn burner seller. Helicopter Manufacturer | Vertical Aviation Technologies, Inc. | Sanford
Helicopters are great tools but are expensive tools. Some people have expensive tools at home because they can. They always expect to get something out of them when they get rid of them. A homebuilt helicopter can’t go to work which is 90 of all helicopters. Value for a homebuilt helicopter is lower than an airplane for the amount of work and cost because the buying audience is so small.

I know. I know some had a brother in law deal to make them that. At least two turbine conversions were done with cash.

There once was an DME who if you payed asking price, tested you for your A&P. If you put down double, he just signed the paperwork. Money can solve any problem. Most of us don’t have that money, but some do.
E

The factory put a turbine in the A model back in the early 70s. I do a lot of As. A friend has the stuff to duplicate the turbine A. It’s not certified and his stuff has to pull its weight. Maybe someday

The factory put a RR in a 280FX. The issue is $400,000 engine. At least two of the bootleg experimentals has Allisons. The orange mock up TH-180 used the center section from that aircraft. The TH-180 which was a revamped A with a O-390 was going to be hot seller, but spending got stupid after the old CEO left. The very avoidable crash of the first one did not help. They have had a perfect storm of setbacks and mismanagement.

Robinson sells a lot of helicopters on speed. It’s a minor difference between it and the Enstrom, but numbers win. Same with the fourth seat. I would rather be in an over gross Enstrom than an at gross Robinson, but again it’s numbers. Robinson is easier to own maintenance wise too. Enstroms are not hard to work on, but you have to learn some details. Price for three blades. Volume. Robinson was volume from the beginning. That’s the design choice from the beginning. Enstrom is smooth, easy to fly, stable, comfortable. You are not going to beat its autorotations. It’s a much better aircraft for low time pilots. You can make flying mistakes that would kill you in the Robby. Great trainer. A professional should always do the right thing. What gets people is doing the wrong thing and an Enstrom will save your bacon.

When the Enstrom engine quits the pilot has 12 seconds to react and get collective pitch down.
The R-22 is 1.5 seconds or blade loss. My reaction time is more than 1.5 seconds.

I only see one that "might" be registered as E A-B. All the ones registered to the factory are other kind of experimental.

Turd Ferguson said:
I only see one that "might" be registered as E A-B. All the ones registered to the factory are other kind of experimental.
Click to expand...

This is what I see.
Doesn't matter. I was suggesting the buyer of liquidation parts could sell EA-B kits without any TC.

BBerson said:
This is what I see.
Click to expand...

A KR 1 and an RV 6 are not Enstroms - Look closer.
Enstrom had one Powered by an International Harvester T62 back in the day and the "Spitfire" batch was impressive. 4 seats.

A cheep two seat trainer was tested wich looked like a mini tadpole with a standard swash plate and paddles to trim cyclic forces, To enter the cabin the whole nose slid forward.
Last edited: Jan 23, 2022

The Michigan registered Enstroms that belong to the factory are exp-R&D. The one in Oregon could possible be registered as E A-B.
T

The one from Oregon, I think, has a Hughes 500 Allison in it. I don’t think it lives in Oregon most of the time. It looks like there has been some attrition on the oddballs.
E

Enstrom helicopters would all definitely have looked much more modern and streamlined and "substantial" if fitted with a nicely styled and painted well proportioned "mast-shroud".......
Frank Robinson got it right.....his masts have shrouds!
(anyone out there thing Frank got it wrong?) 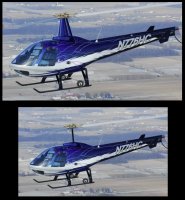 I never liked the sail. And that’s before I even knew what an Enstrom was. Years ago I figured a 5 gallon fuel tank could sit up there and gravity feed the mains. It could be sculpted to make it look cool and not look like a sailboat.

EzyBuildWing said:
Enstrom helicopters would all definitely have looked much more modern and streamlined
Click to expand...

did you do that little streamlining improvement? That looks 100x better ! !