A nearly five-year-old thread? You're lucky that AIRPLANES are still being discussed.....

Apparently there are plenty of used Zenith fuselage skins that can be repurposed to enclose a VP-2.

I miss some threads the first time around so I'm glad they get dragged back out.

I was sure I had some relevant pics to add but I can’t seem to find them. Anyways, I think the one to copy is a red and yellow VP-2 that I’ve actually seen two full size human beings fly in on a summer day. It’s Canadian registered but I can’t remember what the registration was. In any case, I’ve seen it at the UPAC fly-in in southern Ontario so it must be based a reasonable flight from there.

To enclose a VP almost seems like a sin.

I would build a greenhouse similar to that on the Fiesler Storch but with fewer angles and pieces. Extending the line of the stock design windscreen to an appropriate height for head clearance, flat to past the seat back and angled down to the fuselage from there, so just two angles from the side profile. For top profile build a flat ledge at the top of the fuselage appropriate for shoulder room and angle it back to the fuselage for and aft in lines consistent with the angles of the side profile so the top profile would have two angles on each side. Then front and rear would be draw straight lines to join side and top corners. Flat everywhere is consistent with the rest of the plane.

Not if it's done ugly enough to be "cute".

I found two babies on my door step this morning. One of them is a VP-2 fuselage built from the ground up to be enclosed. The cockpit bulkheads haven't been rounded off and the ply side skins go all the way to the top, even in the turtle deck area. 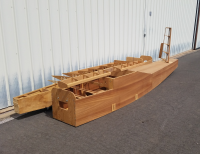 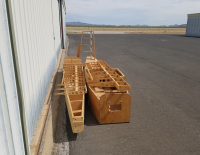 mcrae0104 said:
Can you describe the problem more specifically? How does a fuselage skin wear out?
Click to expand...

The fuselage skin flexes in and out ........ oil-canning ........ until it develops cracks, wrinkles and smoking rivets.

I belong to the builders groups and I've never heard this mentioned. There's a ton in service, I find this odd they would wear out.

I did the first flights on two new build 601 HDs and it was a bit unnerving to see the wing skin flexing before it settled down. When you compare it, say, the skin on a PA-28, which appears to be cut from the Brooklyn Bridge. The skin on the turtledeck flexes like a biscuit tin and they warn you not to press down on it when climbing aboard. The second one of the two had the most annoying creaks and groans from the undercarriage until we lubricated it thoroughly and machined and fitted an extra nylon sleeve for the noseleg to slide in. If you flew them without a headset, you could hear the airframe flexing (oil canning) and I also flew a 601 XL, whilst wearing an expensive Bose headset, and it oilcanned at a frequency that could be heard over the headsets ANR ability. The aircraft looked perfectly fine on the ground. The 701 and it's copies (Citius, Savannah) appear to have more rigid airframes.

Tiger Tim said:
Is that what happens to them? ... I guess that’s the side of cheap and easy airplanes that seldom gets discussed, the idea that they’ll more than likely have parts wear out faster both because of simplified construction and how often they’ll be flown.
Click to expand...

I don't think "cheap and easy" wears out any faster than "expensive and tedious". ...the humble Volksplane is a perfect example. IMHO the 601 is "just good enough" more than "cheap and easy".

FritzW said:
IMHO the 601 is "just good enough" more than "cheap and easy".
Click to expand...

That’s probably a much better way to put what I said, though there is still an awful lot of overlap between cheap and good enough.

Tiger Tim, I don't know about a red and yellow Canadian VP-2 but there is a Subaru-powered white one with red and blue stripes that caught my eye. I have corresponded with Jim Scoles, the original builder.


Fritz, do you know the story behind the VP-2 fuselage? Was the idea to enclose it or was it just about taking "KISS" even further by making the bulkheads simple rectangles?

blane.c, the Baker Supercat is very cute and can pull off that canopy well as a cartoon version of an ag plane, but on a VP-2 the straight lines would restrict the already tight cockpit to single-seat use. The only way I have come up with to enclose a VP-2 and keep some elbow room is a bulged canopy like a WWII Malcolm hood.

Maybe for an aluminum skin. But the VP is made of plywood.

cluttonfred said:
Fritz, do you know the story behind the VP-2 fuselage? Was the idea to enclose it or was it just about taking "KISS" even further by making the bulkheads simple rectangles?
Click to expand...

It's definitely so he could enclose it. I'm not exactly sure what he had in mind for the canopy/cabin (I think it was going to be more of a Piper Cherokee'ish cabin with a T top).

Rounding the bulkhead corners is such a non-event you wouldn't leave them square just to keep things simple.

A canopy can be easy … er cozy?

Old thread...new question for anyone with experience with blown canopies. Is it possible/practical to do a blown canopy that is bulged wider than the canopy rails at the sides to provide more elbow room? Something like this? 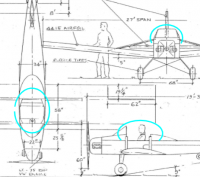 Several years ago I was at a fly-in at Wynkoop airport ( 6G4) , OH and this airplane flew in from Maryland. They don't come any better than this one. Talked to the owner for a long time about the airplane. Very, Very nice.
2
You must log in or register to reply here.
Share:
Facebook Twitter Reddit Pinterest Tumblr WhatsApp Email Link