The plans are incomplete. Google EMG6.
There is enough information to lure you in, but the CofG is not included and Brian would not respond to my inquiries.
Ben
D

Thanks
I did not dig deep enough to look at the drawings.
It looks like a CNC machine will be needed to make some of the parts.
Dennis

wanttobuild said:
Brian would not respond to my inquiries.
Ben
Click to expand...

Is he still in business?
W

I don't know Prop. I read he got ripped off (his hanger) they used his trailer loaded it up with tools. He said the wonderful California cops would not do a thing, LOL.
He is going for the Green, meaning environmentally friendly. Not my kind of concept.
The big 6 is a really nice design. but a lot of parts, prop drive shaft extension etc. will make it hard for the homebuilder to complete, maybe by design?
I have now moved on to composites, taking old rag and tube designs so the non welder can have that airplane they have been lusting after.
W

It looks like Brian is going out of business.
A lot of high $ equipment for sale

maybe you should buy his testing machine
W

Rainbow aviation is moving to the Kansas City area.

I know this thread hasn’t been active in a while, but I was wondering if anyone knew how the EMG-6 attaches their jury struts to their strut? I’m currently in the process of designing an ultralight and was thinking of using similar jury struts since I’m already using the same wing support struts. They have great resources on CNC-able jury strut gusset attachments, so it seemed feasible to use their jury struts as well.
Although the EMG-6 has a plethora of information on a multitude of their build strategies, I couldn’t find anything on their attachment to the strut.

Below are a couple screenshots of the jury strut attachment from two different versions of the EMG-6 design. In the first photo, three jury struts somehow attach to the wing support strut internally as there doesn’t appear to be a nut on the other side of the support strut. The second uses a bolt through the support strut. Interestingly, the cross bolt which attaches the jury struts seems to be going through the vertical bolt, however the vertical bolt does not look nearly thick enough for this task. Has anyone here used this attachment method before? We’ve also been looking into clamps as another attachment method; what would be the most recommended? 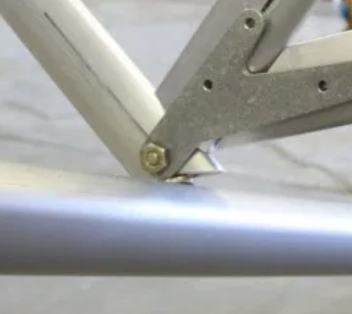 Thank you in advance for any advice or information!

Hello again!
We stumbled across how this is attached by complete accident, while looking over their drag struts. It’s so extremely intelligent I just had to give an update, and incase this helps anyone. They use and eye bolt for the jury-strut attachment, and although they did not specify the sizing, they did mention using the AN43B-20A bolt as the hinge for their aileron.
I just keep getting impressed by the rainbow aviation team!

Has anyone completed and flown their EMG-6? Are the two prototypes that Brian built the only ones flying? I'm curious as we are hoping to complete ours by mid 2021 and it would be nice to gain insight with other EMG-6 builders prior to flying ours. It seems that Rainbow Aviation has abandoned the project and that Mr. Carpenter has gone "off-grid".
W

I was just looking at the drawings last nite. It is one of the best designed planes I have stumbled across. memde, you must be in Hawaii? Class project?
I can only hope Brian settles down in Kansas City and starts to produce the Big6 in large numbers.
He deserves recognition for such a well designed aircraft, and hope he gets it.

That being said the EMG6 is a straight forward project, just a little more than your average homebuilder would like to undertake.

I want one real bad!