I searched through the threads and found a few discussions on the topic of elevator trim solutions but I'm still undecided as to which approach I will take for the RW19 Stork that I'm working on.
Top speed for the Stork should be around 100 mph but the elevators are pretty big with a lot of surface area.

1. Trim adjustment in the cockpit on the stick.

2. Trim tab on the elevator using a 20kg rc servo built into elevator driving a pushrod to the trim tab,servo driver mounted in cockpit for servo adjustment and a converter to change 12v to 6v to power the system.

3. Trim tab on elevator actuated by a cable that runs to a lever on throttle quadrant.

I understand that a elevator trim tab with play in it can cause flutter with serious results.
I'm not sure how to make a trim adjustment on the stick but maybe someone has a design they could share.

Opinions as to which route would be best for elevator trim.........stick or trim tab ?

I have a friend with a PA-18 who never uses the trim. He sets it for cruise, and doesn't mind the stick forces at other speeds. Depending on the type of flying that you do, a fixed tab on the elevators may be adequate.

A controllable trim tab on the elevator may allow the plane to be flown to a ianding if primary control of the elevator is lost (cable/pulley breaks, etc).

a simple system is a couple of springs on the elevator push-pull tube (or cables), connected to a trim lever. This ads a spring bias to the elevator. Downside is no back-up control in case of a linkage failure like with a separate trim tab.
R

Similarly, some homebuilders/glider pilots wrap bungee cord around the control stick and slide it up or down to vary trim.

Precisely-made trim tabs rarely flutter. The real issue is long-term elongation of bolt holes, so dismantle your trim mechanism every annual inspection. Clean it, grease it and put it back together. Then test for slack by grabbing the trim tab and try to wiggle it up or down..

Vigilant1 said:
A controllable trim tab on the elevator may allow the plane to be flown to a ianding if primary control of the elevator is lost (cable/pulley breaks, etc).
Click to expand...

For the first couple of years I had an adjustable tension spring on the stick for the elevator trim. But, I wanted a backup pitch control if a elevator cable or system would brake. So, I put an electric trim servo on the elevator of the SSSC. It will fly the airplane in pitch with the trim tab. I have it adjusted for full up trim to be my normal approach speed with engine at idle. Draggy airplane so I just mounted it on the outside of the elevator on an alum plate. Works great, 12 volt and using a rocker switch for up and down trim.

Did the same thing on the JMR but mounted the servo inside the elevator. The weight of the servo is 55 grams. Very powerful, would power the entire elevator. Starting out with a larger trim tab and will reduce cord for what I want.

Pops......I saw your set up from a previous thread and that is the same way I would build one.
It will be done just like an rc airplane.....trim tab will be built into the elevator,20kg servo with pushrod,servo driver/tester to adjust the servo,converter changing 12v to 6v to run the whole system.
My estimate would be 3/4 of a pound for the entire system.
And around $25-$30..... 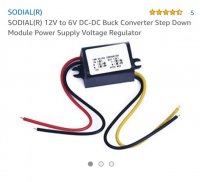 BJC......a fixed trim tab would suffice but I would much rather have an adjustable trim system if possible.
My flying will be low & slow with emphasis on STOL capabilities....major changes in power & speed from an aircraft that will have a lot of pull from a big engine/ prop combination.
Being able to trim from a walking pace to top speed would be nice.

The problem with the RC Servo is holding a back force causing a much higher drain on the battery and shorter motor life. On my homemade autopilot I used giant scale RC servos to drive the trim tabs flying the airplane. The airplane needed to be trimmed close to trimmed flight to keep the current drain down because of the low back force problem.
The L-16 Actuator that I used on the trim tab has a 102N back force rating, (23 lbs) with the 150 to 1 gear ratio with a 200n lifting force (45 lbs) Weight is 3 oz . I don't know the back force rating of the RC servo but I know its not very much. Hook an amp meter to the power lead to your servo and use your hand and with the servo on, try to turn the output arm and you will see a huge increase in current drain.

BTW-- you can buy these actuators to take the RC pulse train input, but I just buy the one with limit switches at each end and use a rocker switch to operate. With the 150-1 gear ratio the speed is just right for setting the trim.

Plastic gears in those RC servos? I'd be wary. A stripped gear could result in flutter.

The Cessna 400 used small linear actuators for trim tabs, and there were two pushrods to the tab. One went to the actuator, the second was a brake. It passed through a split plastic block that had clamp screws for adjusting the friction on the rod, and at annual we checked the braking force with a scale to keep it in spec. That brake was to prevent flutter if something failed with the actuator or its connection.

I used a Bowden-style cable setup on the Jodel. Wicks sells the wire and housing separately. You want the biggest wire practical so as to avoid breakage in flight.

I prefer the tab solution. Besides the flight redundancy, it avoids the artificial feel and increased control gradient that both come from spring centering.

You can mount the servo or the anchor for the Bowden cable on the horizontal stabilizer with an adjustment for how high or low on the stab you put it - you can go from pro-servo (tab moves opposite direction of elevator to reduce control force gradient) to zero servo to anti-servo (moves same direction as elevator to raise control force gradient). Putting the servo on the stab reduces the mass you have to add to balance the elevator if your plans say to balance the thing too.

Dan Thomas......any servo that I would consider for that application will be metal cased with metal gears.
The one pictured meets those specs.

Manual elevator trim on an RV is a tab driven by a vernier push-pull cable. The button is removed so it only works by turning the knob. Works really well.

When I had the mechanical trim, I used a plastic wheel to run a length of all-thread to move the rod forward and rearward to the spring that went on the elevator bellcrank. Worked good, latter I turned a wheel from aluminum. When going to the electric trim servo, I install the rocker switch in the same location.

I'm in the "set it for cruise and leave it alone" camp. But of course that's not desirable on aircraft with heavier control pressures, or where trim changes significantly with fuel burn.

On my Kolb, I used a light bungee with a short length of cord in a jam cleat to add nose down trim. No redundancy, but I had ground adjustable tabs set for a very slow speed, with the idea that it'd be survivable if I hit at that speed, then the bungee trimmed it out for higher speed. On my Fisher, just a fixed tab, never saw the need for more. My Starduster had a Cub style stabilizer jackscrew. My Hatz has a hinged tab with a push-pull cable and a lever in the cockpit, I leave it alone for general flying but tweak it as fuel burns.

I like the double spring idea, and that's how I intend to do mine. But that's last on the list.

I love the accurate feel of trim tabs and do not like the flex idea of springs or bungy cords.

If cable/rods a vernier system is my choice with a big wheel wheel to adjust quickly and accurately.

I trim for fuel burn/loads and speed range. But happy to fly it with human trimming if needed on sporty ones.

For servo- I agree the linear versions are far superior in feel, safety and cost.

I would never choose a RC servo unless it cost a arm and leg.
Yes, you can buy cheap ones with metal gears but they are much more than just gears and the pot, motor and circuit board are all easy failure points. They also can do nasty dances that look like flutter in effect.

Even separated from a RC system and potential signal problems they are still problematic at times. The big expensive high power models use very precise and expensive servos to not just handle the big loads and high speed response but for safety. They often use a gang to provide a level of redundancy.

A servo as discussed uses a lot of power and heats up. Fine if no problems but seen them burn wire and even start a fire.

The actuator is a very simple machine and much less prone to failure in service from experience. It also stays put when you stop power, some servos revert to a preset position or a random one when a fault develops on its board or even voltage stops.

I would not use a $30 rc servo but a $300 set of two high end ones- linear is still better in a machine that carries live flesh.

Pops....alright,alright,you've sold me on the linear actuator...it's pretty cool actually.....lol
I do believe that it will be a more reliable set up than using a rc servo.

MadProfessor8138 said:
Pops....alright,alright,you've sold me on the linear actuator...it's pretty cool actually.....lol
I do believe that it will be a more reliable set up than using a rc servo.