I've always liked classic German gliders from the 20s and 30s and 40s, especially the aerobatic ones. I had a notion lately to come up with something along those lines, except: easier to build and with electric self launch capability. Enough juice to get up to, let's say, 4000ft , shut down and aerobat your way back down. No great cross country requirements, nor speed. Just unbreakable in the air, cool classic lines (probably open cockpit and easily removed wings, by one person. Ought to feasible even with current battery technology.

Glider plans seem to be thin on the ground and I certainly can't find anything with these kind of lines. The motor could always be retractably mounted on a pylon . Anything even remotely like this out there? 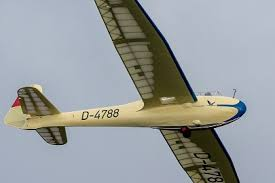 The MiniLAK isn't far off... production, not homebuilt. FES instead of pylon (which seems much preferred to me), but only rated to 5.3 g, not 6 g.

Man I want a MiniLAK.

(The MiniLAK in no way looks "classic", but it shows what performance is available at TRL 9.)

Kermit Weeks won the 4 minute free at a World Aerobatic Contest with a 5 g limitation on his Super Solution.

The Radab Windex is pretty close, except its not a homebuilt and its been out of production for ages.
B

PTAirco said:
... I had a notion lately to come up with something along those lines, except: easier to build and with electric self launch capability. Enough juice to get up to, let's say, 4000ft , shut down and aerobat your way back down. No great cross country requirements, nor speed. Just unbreakable in the air, ...
Click to expand...

YEA -- 1980 I built a frame for a Fledge ll-B that did exactly
that , to power up a few thousand feet, and practice ACRO back
down ; only the engine was the sun , and thermals got me up to
altitude . Dang it was Fun ; burned 50-k ft of altitude, on many a
day ! It's SOooo addicting ; nothing else matters . Going UP ; is
as much Fun as coming back down .

Wouldn’t that make it an electric POWERED PLANE?

[email protected] said:
Do not miss Tehachapi in two weeks they may have close to what you are looking for
Click to expand...

Harald Buettner had a mini sport glider in development called the "LaPruvo". I think he built a fuselage and part of a wing or something. It was years ago. If you can get to ESA Tehachapi, he'll probabbly be there (based there) unless he's visiting relatives in Germany or something. Regardless, this would be a great start toward what you are thinking about.

Wouldn’t that make it an electric POWERED PLANE?
Click to expand...

This comment reliably comes up every time someone mentions the concept of a motor glider. You'd think in an aviation related forum people would know that a glider isn't just a regular plane without engine.

jandetlefsen said:
This comment reliably comes up every time someone mentions the concept of a motor glider. You'd think in an aviation related forum people would know that a glider isn't just a regular plane without engine.
Click to expand...

I may have been around long enough to teach you young wanabe pilots a thing or two.

The determination of an aircraft’s identity is fluid. It may be considered as similar to determining the identity of a humanoid.

Many pilots think of themselves as “macho” men capable of doing nearly impossible things, for example “flying through the air”. On the other hand the “real pilot” may consider women as sex objects depicted as “nose art” on the shiny surface of a grand and powerful airplane. 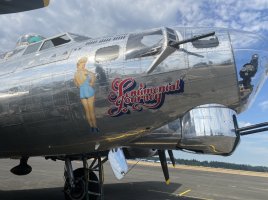 In the real world there is not just night and day, clear or foggy. There is twilight and mist and a “real pilot” knows how to manage his aircraft in extreme condition of wind and rain as well as in marginal of conditions of poor visibility, snow and ice.

Is there a carryover to aviation? Yes! The determination of glider or airplane is not made by the certificate on board. The determination of glider or airplane is made by a functioning engine on board. It doesn’t matter if the engine shut down an hour ago or a second ago. If it is an aircraft and it does not float in the air it is a glider and if the pilot is a pilot he (or she) is a glider pilot and you darn well better accept it as a fact.
Last edited: Aug 18, 2022
M

So, if I understand correctly, the question is: Does a motorglider ever get pregnant?

Marc W said:
So, if I understand correctly, the question is: Does a motorglider [or motor glider pilot] ever get pregnant?
Click to expand...

If you are asking “THE JEDI” the answer is a definite YES*.

Ask any woman. If she is enlightened, she will most likely say that if the occurrence is well planned and done with the right partner it can make life a joy. But that is not always the case. If it comes unexpectedly at the wrong time it can be like an “OH ****” moment, literally.

In the best case scenario there are a lot of ups and downs and that is what makes the whole experience “interesting”.

Flying a glider is like having sex without “protection”. It’s not for everyone but it can be very satisfying if done right.

Need I say more? Yes, you say. Then read the asterisk bold print below.

So if my Hatz biplane identifies as a motorglider, I don't need a medical to fly it?

I had one of our HBA participants get upset with me (privately) a few months ago over making a joke about today's fluidity and gender identification world... and fully expect that person to become upset with any such discussion here in this thread too. That said, with sincerest respects to his many more years of aviation experience than most of us, I think our beloved old Jedi could possibly have come up with another way to explain the similarities and differences between a powered airplane and an unpowered airplane

It's probably the most exhilarating thing you'll ever do in your life, and you'll do whatever it takes to be able to afford it again.

Once again, I am overwhelmed with the breath of your experience. I must meet you one day.

Well, if I'm being brutally honest, I never had that many cheerleaders, but I sure did watch way too many friends have life-altering problems with the 'ludes back in the day. Parts of one high school friend and his Camaro are still at the bottom of Mulholland where they used to steet race in the canyons. My friends and I would run through the curved section of Sunset Bl. between BH and the 405 freeway at night at ridiculous speed; I'm sure I used up one or two of my nine lives there in a 280Z with a turbocharger on it. (sorry, way OT)

I will cheerfully serve as the poster child for the addiction to gliders, though

Dana said:
So if my Hatz biplane identifies as a motorglider, I don't need a medical to fly it?

It was probably listed as “airplane” deep within the FAA paperwork that was filed.

As implied in the prior post that can be difficult to identify and change.

For VB and friend I have studied the situation and welcome discussion via alternate methods. I have had issues with the FAA among many things not the least of which is that the 8710 does not permit a “gender fluid” individual to be a certified pilot. I am squarely on his/her/fluid/other side.

For any listeners that think they may have joined the “Mile High Club” I have news for you. You are not a full fledged member until you have done “It*” in a glider.

Not to brag but I think I got mine in a Cessna 150 at Mt. Si elevation 4,824 feet but I did not have a barograph to record it. In life there are many things you are wise to not record. Joining the mile high club is frequently one of those things.
Last edited: Aug 18, 2022

This is a coded message for a “special” group of pilots referenced in Victor Brovo’s post # 14 as a possible “participant”.

Membership in the “mile high international association” is open to all regardless of race, religion, nationality, etc., etc. A participant Does not need to be a certified pilot and the “crew” may be a solo pilot. For example many of the most distinguished members have P 51 solo time either logged or unlogged.