I'm getting close to getting back to my UL with folding wings. I need to tip the wing up and then swing them.
My best hinge at this point is a rod end into a fork . The fork is threaded and mounts into a hole with a loose nut fixing it . This allows the wing to move the way that I require.
Is there a ready to use method that does the same ? Thanks,MM

Look at the Kolb wing folding mechanism. Definitely the simplest, most eloquent example of what you are talking about. Something like 3000 of them have been built and flown successfully.
G

I think he's asking about a swivel fitting that is also the spar attach, as opposed to the suggestions that are all rotating support tubes that hold the wing when the spar is detached?
This isn't so hard at the fuse/spar attach, the tricky one is the rotating strut fitting out at the wing.
I looked at the Groppo Trail, and was a little cautious about the strut fitting where the wing is retained by the threads of a bolt, placed through a diaphragm weldment. In reality, probably strong enough, especially on a single seat 103 machine. 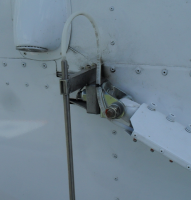 Protech Racing said:
Is there a ready to use method that does the same ? Thanks,MM
Click to expand...

The Thatcher CX4 has a simple fixture that attaches to the wing and the stub wing to allow the wing to slide out, twist so that the LE is down, and then fold back parallel with the fuselage. Yes, a little more trouble than a built-in joint that bears the flight loads and also does the articulation, but it is a lot simpler and maybe lighter.
More here: The Ranger, an easily built high wing LSA runabout

Thanks, All good input .
D

I'm designing around the wing swing . It should swing under the T tail and nest on the bottom of the rudder. I hope . Still drawing stuff but found some time .

Be prepared to have the flaps end 6 or 8 inches outboard of the cabin, and then have a non-structural fairing or filler block that goes in after you un-fold the wings. This will save you a lot of grief.

Also, the narrower your fuselage the worse this gets... that's the reason the two seat Avids and KF's didn't have this issue. The problem is the ratio between the flap chord (or the wing chord aft of the rear spar pivot) and the fuselage width.

So if you are able, put the rear spar pivot bolt a couple of inches outboard of the cabin and rear windows. Probably save a lot of head-scratching.

ALSO, plan ahead for your flap, aileron, and/or flaperon controls. This complicates the wing fold design 100X more than the folding itself.

You will have a much easier time if you just bite the bullet and accept having to hook up the pushrods after you unfold the wings. Trying to fold and un-fold the wings without disconnecting the flap/aileron controls is a huge PITA. Dean Wilson did it, but had to accept flaperons instead of (superior) separate flaps and ailerons.

The Ridge Runner had to use a one-direction tension cable (and really lame return springs) in order to get the "real" flaps back, and it is a little wonky. All of this could be avoided if you simply have push-pull tubes that are disconnected and re-connected to bellcranks using the L'Hotelier fittings (miniature trailer ball fittings).
P

Thanks.
This is basically a T tail affordaplane ish craft. I drew it up again last night . Looks like if I can get a T tail to work , I have room under the horizontal for the wings to drop and swing . I dont want the weight of a swivel block on the main spar. If I use the rear spar , i can use a light block and bits. Downside is that the fuse has to be taller to keep the wings off of the ground . 52-53 chord and rear spar is 10 from the trailing edge.
Some easy sketches and the rear spar is behind the seat enough not to interfere.
My issue is how to make the alloy fuse stiff enough for the top mounted Ele . I will extend the rudder under the keel to reduce the flight load /control torque .
You must log in or register to reply here.
Share:
Facebook Twitter Reddit Pinterest Tumblr WhatsApp Email Link