Had my first solo yesterday! After waiting at the airfield most of the day ended up flying with my instructor in the evening.
I knew I was going to solo very soon, but I didn't get nervous until he got out of the plane and told me to do a couple of circuits. Taxiing back to the end of the runway was quite tense but once I started to roll for takeoff the training really kicked in and it was easy. I ended up flying three circuits and doing a full stop on the third. Just landing in time as it started to rain on the approach end of the runway and visibility became quite an issue on final. I got the plane down safely and taxied back to the hanger in the rain. The only other aircraft in the circuit also called it quits because of the rain and landed behind me.

My instructor commented that if I had gone around again he would have got on the radio and told me to come back.

What were you flying?

Congratulations you will remember your first solo for the rest of your life.

proppastie said:
What were you flying?
Click to expand...

First up, a picture of the Karatoo that I have done most of my flight training in. There is another white and green one that I was flying previously but the Rotax 912 in it failed a leakdown test and the heads are currently being rebuilt. 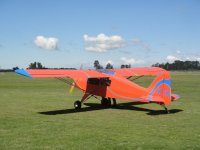 And some more progress on the new heads for the engines. I roughed out and then machined all the combustion chamber domes. I have kept the compression ratio the same as the stock cylinders at around 13.7:1 uncorrected and the squish band sized for 6500rpm. I did change the shape of the combustion chamber from a doughnut to an elliptical dome, mainly to accommodate two spark plugs. 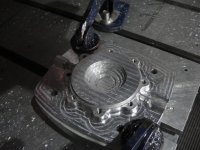 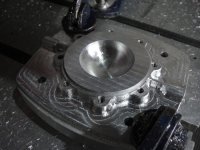 Then spent quite a lot of time machining the fins into the top sides of the heads. A black painted plastic mockup for comparison. 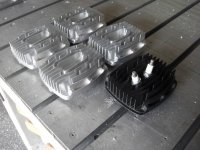 Awesome airplane and color! My first ever solo was in an orange airplane also!

I started cutting out the last fin slot in the new heads today, but first I needed to make an adapter to hold them in the lathe.

I turned a recess to fit the head underside in a piece of aluminium, then I match drilled it to one of the old heads I made. Then flipped it and counter-bored the holes to fit the bolt heads
I had drilled the bolt holes in the new heads undersize and tapped them with M4 threads specifically for the purpose of mounting the heads in the lathe. I will drill them out to final size once all the machining is finished. 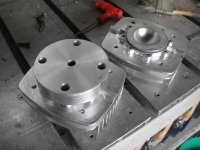 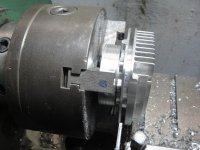 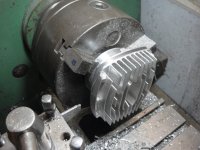 Looks amazing Shannon!! Just super glad I don’t have to go thru that!

Made more progress on the exhaust headers and the tool steel arrived for my new parting tools for the lathe.

I started cutting up the 32mm U-bends that I purchased a while back, I needed four 180° bends to make the two headers as the bend angle is slightly over 90° (95° to be exact). Some of the offcuts get used up in the process of making other parts for the headers. 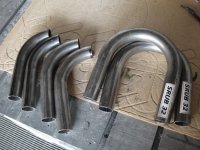 I made a jig from some offcuts of plywood to mark the U bends for cutting. Having the CNC makes jigs like this really fast to make. 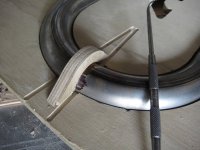 After sanding the cut ends square on the linisher, I beveled the opposite ends where they join together. 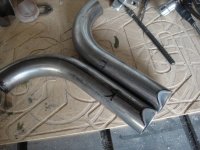 So they fit on the engine.. 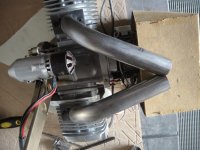 The next step was to form the rectangle end to match the exhaust port on the cylinder heads. Circular exhaust ports would be much simpler to match up. I formed the first exhaust tube as they came and after wrestling with it for too long I decided to anneal the rest of the tubes by heating them to red heat and letting them slowly cool. 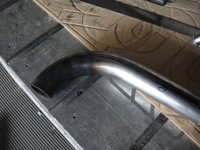 I used the swage tool that I made a few years back when I made the first headers. It is a tapered steel wedge that pushes two tapered aluminium blocks outwards to form the rectangular pipe end.
I had a real issue keeping it in the end of the pipe as I was tightening the bolt. When I tried to tighten the bolt, the wedge effect was pushing it out of the end of the tube rather than forming it. I ended up using some coarse valve grinding paste on the outer surfaces of the aluminium wedges to hold them firmly in the exhaust tubing, and a liberal amount of grease on the steel wedge made it easier to tighten the bolt. The rectangle ends are also at different angles (16° and 29°) to the tubes, so careful work was needed so that everything was going to align once they were formed. 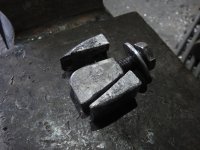 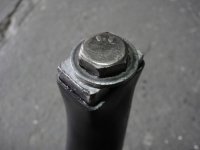 I also made the smaller end pieces for the two into one headers from some of the offcut U bend pieces, no idea what to call them but they look a bit like tiny pairs of shorts! A few more tweaks and these will be ready to tack together with the TIG. I also need to make another ball end. 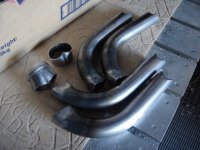 Then it was some more machining on the new heads. With a small amount of modification, the new parting tool steel fit into my existing parting knife holder. Then I turned the last fins to the correct thickness and the slot to its full depth. I still need to machine the sparkplug holes on the heads but I want to bead blast them before I do that. 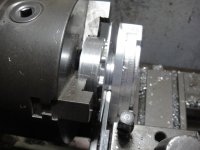 I masked out the heads today and blasted them with the glass beeds to get a matt finish.
I want to paint these matt black to improve the heat radiation, the conundrum is that I cannot find heatproof paint in matt black locally. I can get engine enamel or caliper paint in stain black and I can get matt black in normal enamel paint. I do wonder if the heatproof paint is actually any better at letting heat out as some of it contains ceramics. I might go ahead and paint these with standard matt black enamel and replace the coating later on if it doesn't handle the heat.

Get the heads anodised in Christchurch. I had some black done there.

Geraldc said:
Get the heads anodised in Christchurch. I had some black done there.
Click to expand...

My question is, does the anodizing shed heat better or worse than a thin coat of black paint?
T

I believe the anodizing is better because it becomes part of the part. Time to start researching pros and cons. They look awesome no matter what.

Anodizing will shed heat better but it will be a small differential in this application. Almost all paints are slightly insulating unless loaded with a lot of heavy metals. Anodizing is a plating process that electrochemically alters the surface and it will last. If the surface can be matte black and conductive that is the best solution.

All the high temp paints I know of aren't very durable. They chalk off readily as the solids that control the heat characteristics are just in suspension so they just come off when the resin base gets stressed.

Cold plasma spraying is a fun technology. If there is a pattern shop around they might have a machine to do that... but that is more for abrasion resistance.

I decided to give the heads and the barrels a very light coat of black paint, foregoing the previous ideas of anodizing or plasma spraying. I have already spent far to much time thinking about how to do these and I now just want to get them done!
First I needed to skim the top fin on the cylinders down a little as it was thicker than the others due to previously being the topmost fin.
Once I had that sorted, I gave both barrels a beed blast to get the matching texture. Then I painted them with some thinned down matt black. I think the matt black gained a slight gloss due to the added thinners. The black is every so slightly patchy due to the coating being so thin. The CriCri engine manual states to use a brush and dab the paint on to keep the thickness to a minimum. NACA reports indicate that thin black paint has a few percentage points gain in heat transfer over bare aluminium. I think it might be called black body radiation? ( I need to look that one up)

This photo, stolen from Jake Raby’s web site (http://www.aircooledtechnology.com) is of a Type IV head that has been treated with the full ...

Bob Hoover's blog is a goldmine of information!