Pulled all of the clecos out of the rear canopy today, I used some 3mm acrylic strips to help keep the PETG from rippling too much when gluing it in place.

Picture of the acrylic strip still in place 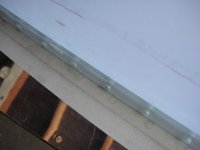 And with it removed showing the oversized holes for the clecos. 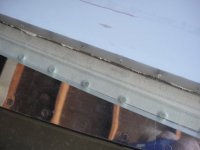 I went through all the holes with the 2.5mm drill bit ready for the rivet and started countersinking all the holes. I put a few clecos back in to hold the canopy in place in case of the sealant starting to peel. 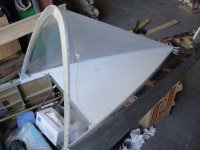 I also alodined the landing gear clamp parts and then painted the clamps and hangers with the 'chrome' paint. I will let the paint on the gear fairings harden a bit longer before wrestling them back over the gear legs. 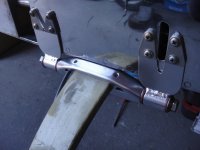 for info canopy is supplied by www.starplast.fr/fr/ company in france
but very expensive 1500 euro + shipping

my cricri project in tahiti is going slowly but steadily ,
if you are able to sale me canopy , i am intrested
for your flight training , if you can come to tahiti , i have extra and fly extra 200
could be good training airplane with ailerons rate close to cricri

When I have canopies I am considering selling some if I can make them to a good standard! Shipping might cost more than the canopies themselves.

I have also heard that the R22 helicopter is similar in control response to the CriCri and I can fly one of those around no issues, hovering it is another story but I would like to try again soon.

shipping will not be problem, if a plan travel in your lovely country next year as soon as airline start again flight PPT-AKL
no rush for canopy supply for me i still have lot of work to do
david tahiti

Good to hear, feel free to keep posting updates on this forum, I don't mind if its on this thread or you can always start another build thread. Up to you!

I've been making some more progress but keep forgetting to take photos and put up an update.
Today I made a folder for making the nose vent fairing. I had these cut out from a long time ago, so long ago that the PVC mask is starting to break up really easy. At least it still comes off. 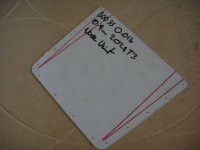 I scuffed up the inside with the scotchbrite pad. The camera really doesn't like to focus on it 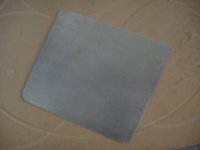 After quite a lot of thought, I made up this contraption to do the folding. The issue is that there is a double fold but the end of the fold is flat. Folding 2024 one way and back flat again will cause it to crack. 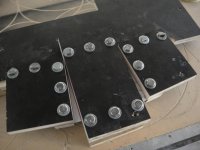 With this gadget I can fold both folds at the same time while keeping the flat part from being folded. I have to hit it on the sides with a heavy hammer to get it folded but it does go down really well. 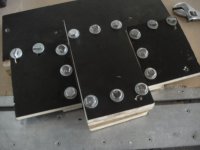 And voila' a folded vent cover! 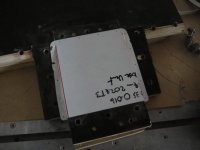 And the underside, I did alodine the inside once it was folded and promptly forgot to get a picture! 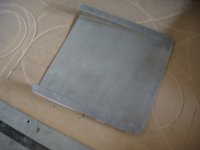 AND after all that, the jig is folding things 2mm too wide. I might be able to use this one, if not I have already trimmed the center form block a little so that the next one should be spot on.

looks nice....appears to have good radius (would crack if not)..did you hammer each side straight down with the center clamped to the table?

proppastie said:
looks nice....appears to have good radius (would crack if not)..did you hammer each side straight down with the center clamped to the table?
Click to expand...

To start the bend, I hit the head of the bolt at about 45° at the longest joggle end and once each fold had started I stood the jig on its side and hammered away till the bends were 90°. I cut about 5° springback allowance on the edges of the jig.
I eyeballed the radius and gave each piece an equal number of swipes with the sanding block. Being .016" it doesn't need too much of a radius.
J

Just want to share! Got my vertical stabilizer and rubber 95% done!! Feeling pretty happy and excited for the rest of the build!

JonMiller284 said:
Just want to share! Got my vertical stabilizer and rubber 95% done!! Feeling pretty happy and excited for the rest of the build!
Click to expand...

Looking good, for some reason I found that I enjoyed this part of the build the most. 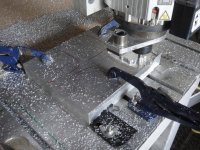 I am working on the final dual spark heads for my engines. After machineing out the underside I cut the parts from the block with the cordless skilsaw. 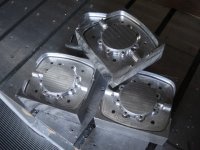 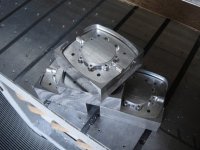 when you get a chance show us a picture that whole machine tool and what CAM software do you use?.....is it seamless with your CAD or do you have to save to one file type to enter into the CAM module

I will get some pictures but I use Vcarve pro on a computer separate from the machine and I transfer the files across using a flash drive. I purchased the simplest to operate machine and added a tool change spindle and do manual tool changes.
J

MadRocketScientist said:
I get 928mm from my drawings.
Click to expand...

Ohh dang I must have missed that call out… what page is it on?

JonMiller284 said:
Ohh dang I must have missed that call out… what page is it on?
Click to expand...

I don't think the actual measurment is in the plans themselves, I took it from my CAD drawings.
J

MadRocketScientist said:
I don't think the actual measurment is in the plans themselves, I took it from my CAD drawings.
Click to expand...