I finished up skimming the forms with filler a couple of days ago, the photo comes out quite dark since its near the end of the day and it's winter here. I 'could' put more lighting in my workshop but it's easier to just go home when it gets cold and dark. 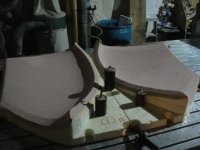 I want to get on with the finish pass on these but first I have another job to do.

The cheap 50mm Ebay roundnose cutters I have are quite out of round (the left one in the picture below) so I decided to make a machine to sharpen them to the correct profile. The cutter on the right is ground to cut a true half circle, the left cutter cuts closer to an elliptical cut. It also has a very flat section and no back rake near the center of the cutter. 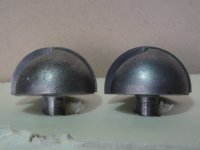 I cut a round circle of acrylic and then used the freshly re-ground cutter to mill a slot through some foam to check the fit. Looks much much better. 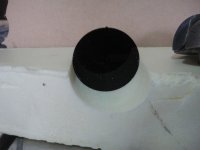 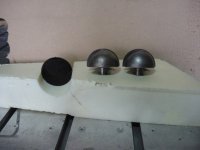 And here is the machine I made to regrind the cutters. It uses an old treadmill motor and variable speed with a 600grit diamond wheel. I made a custom fixture for holding the cutter from scrap acrylic. I made use of a couple of ice cream containers, one to keep any water off the electrics and the second to hold a small amount of water to lubricate the diamond wheel. A small piece of seat foam runs against the diamond wheel to transfer the water to it (seems to work ok and if I fill the water up too much it really flings everywhere) 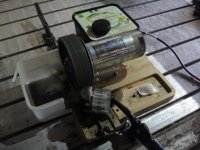 The acrylic mechanism for grinding the cutter sits in a slot on the plywood base and is held in place to do the cutting and manually moved around against the wheel the grind the cutting edge.
I have two main adjustments, I can slide the whole mechanism closer to the diamond wheel to change the cutter nose radius (A machine screw acts as a stop to set the outside diameter) and another machine screw to feed the cutter forward in the pivoting block, setting how much is ground from the nose of the cutter. The tricky part was the the cutting edge isn't mounted completely parallel to the shank of the tool and if I clamped the shank in the fixture the cutting edge would be out of round after grinding. To compensate I had to make a brass support that keeps the cutting edge at the same height as the cutter is ground, the cutter rotates around its shank a small amount as the fixture is rotated and gives a true spherical cut to the finished cutting edge. Quite fiddly to use and would really be best made from something like cast iron due the flex in plywood but to get a couple of cutters sorted it is no problem if a consistent touch is used. Not really a machine for the ham fisted. 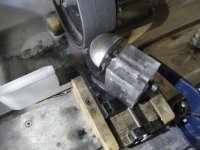 Hopefully the explanation makes some sense!

I CNC cut the foam for the forms with the cutters as I purchased them since the variation from round doesn't matter quite as much when everything is getting filled over but now I have a true ball nose cutter I can make some progress on the finishing.
You must log in or register to reply here.
Share:
Facebook Twitter Reddit Pinterest Tumblr WhatsApp Email Link