Tiger Tim said:
If you’re not careful you’re soon going to run out of jobs to do on your airplane...
Click to expand...

Then I get to start on another one!
T

He is building a Spaceship One and drop plane next.

TFF said:
He is building a Spaceship One and drop plane next.
Click to expand...

But they would have to be in aluminium or wood, I have done enough composites work to not want to build a whole plane out of it
T

Oh man, you just broke my hart. . I guess you can build something piddly like a Mosquito or if really slumming a DH Moth of some sort.

Wood is nice to work with...I recommend. I have no tools for aluminium work.

I also have to do my own tools for foam/wood working sometimes....like hot wire cutters and sanding tools.

MadRocketScientist said:
Then I get to start on another one!
Click to expand...

Its taken me a lot longer that I thought, I am happy with the results so far though

You need to send Mr. Colomban a picture.

Maybe when it is all finished
D

Hi
I have a set of CriCri plans for sale
Make offers, I will not build.
My friend has passed on and he will not use them
Dennis

dkwflight said:
Hi
I have a set of CriCri plans for sale
Make offers, I will not build.
My friend has passed on and he will not use them
Dennis
Click to expand...

Hi Dennis, does it have 3 digit serial number?

Finally some progress however slight..

Today I sandblasted the light rust off the exhaust header and gave it a coat of black paint. It will burn off once I start the engine but should stop it from rusting any more in the meantime. I think It looks really good!

I have also been working on a drawing for a spring ball joint for the exhaust. I got stuck on this midwinter and didn't really get it sorted, so it's a good place to start again. I think I have the design mostly sorted now. These are available to purchase on the internet but not in the size I need (41mm ID).

The original CriCri used a flexible coupling but they seem to break all too often. The CriCri at the local airfield has been switched over the the rotax style exhaust ball coupling and has been working really well. the weakness with the rotax style ball joints is the way the springs keep breaking from vibration. Most of the aircraft locally use a slug of red silicon on the spring to limit the fatigue from vibration. I was browsing the internet and came across the style with the springs over the bolts (last picture). I like the look of these as if a spring breaks, everything is held in place. If both springs break the exhaust doesn't fall off completely. 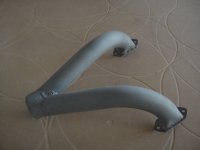 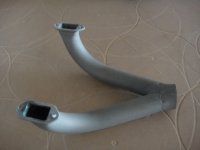 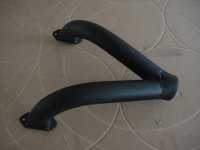 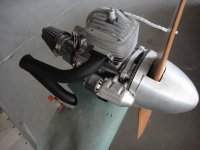 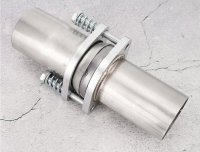 The last pic ball joint would be easy to do: a spherical male mandrel to the size you have, machined, using a hydraulic press to flare the pipe. I would have the mandrel on the top with a wedge sleeve on the tube below to keep the pipe from slipping as it is pressed. The ball would be 'easy' to machine to your size spec 'yourself'. Drill the bolt heads and safety wire them together; I had a SS bracket fracture and go the the prop on the Varieze. Looks like you need a better TIG guy on the pipe junctions. I like the Y-header, but why not on the outboard side?
-Christian
Last edited: Dec 23, 2019

Yeah the TIG guy needs way more practice and purging the inside of the pipe would help a lot Eventually I would like the exhaust made in stainless so its all shiny.

I have designed around a 1 7/8" tow ball since I have some within grabbing distance
With a short bit of pipe the flange is easy to press
The header faces inward to keep the mounting for the tuned pipe closer to the fuselage (I think that is what your question is referring to?)

I am leaning towards threaded holes in the thicker flange and locking nuts to stop the bolts from disappearing, Safety wire wouldn't hurt either.

The video is exactly what I envisioned! Now I see why the header is to the inside..so the tuned pipe is against the fuselage..(brain fart)
I looked at the Kiwi biker site and learned a lot about hydroforming. Seem like the key is edge prebend/butt weld. And pressure control,
rather than all or nothing (ie, handpump); also a pressure gauge? The 4" ring was a good upgrade.
Welds to shoot for: Purging is a must on SS, 100% penetration not so bad either
These guys are state-of-the-art and worth taking a look at..run through their pics.
https://www.goodfabs.com/
Encouraging to see you moving fwd.
-Christian

MadRocketScientist said:
locking nuts to stop the bolts from disappearing,
Click to expand...

Mooney has this system,...and they use standard AN-3 bolts two holes (not a stud) spring, and castellated nuts and cotter pins.....can send you a picture it you want it.

The Kiwibiker site has a heap of info on it. Some really interesting rabbit holes to follow down too!

Incidentally I found something on there that I think may be of interest to CriCri owners. In this thread https://www.kiwibiker.co.nz/forums/showthread.php/86554-ESE-s-works-engine-tuner there was some discussion about having four through bolts holding the head on, causing four corner seizures among other things. There was also reference to the flat four air cooled VW engines, in the that later engines used thinner studs to hold the heads on.

I had a good look through the thread but do you think I can find the posts again?? There is a brief mention of it here, but not about the VW engines. https://www.kiwibiker.co.nz/forums/showthread.php/86554-ESE-s-works-engine-tuner?p=2002552#post2002552

Anyhow, it turns out that with the higher heat in the more powerful engines was causing issues with the heads distorting and the gaskets leaking. The thermal expansion of aluminium is close to twice that of the steel head bolts and as the cylinder gets hotter the tension in the cylinder studs increases, distorting the head. By thinning down the studs, they would stretch as the cylinder heated up, maintaining the right tension in the studs holding the head down.

In this youtube video after the 2:55 mark they show a head gasket failure.
This has been a somewhat common issue with the JPX engines in the CriCri. Normally this has been attributed to the four studs holding the head on not clamping the head evenly enough. I suspect that the different rates of thermal expansion of the cylinder and thick steel studs also have something to do with it. Possibly thinned studs would help alleviate the problem?

proppastie said:
Mooney has this system,...and they use standard AN-3 bolts two holes (not a stud) spring, and castellated nuts and cotter pins.....can send you a picture it you want it.
Click to expand...

Feel free to post a picture or two on here

off the internet...notice the crack. 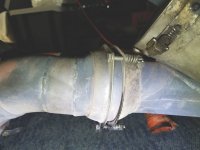