Inflated the expansion chamber today, ended up just okay. I think I will try a slightly different pattern shape and make another one. I will give the next one a bit more pressure, the waterblaster didn't even break a sweat. 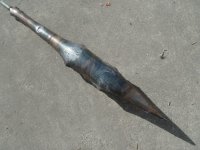 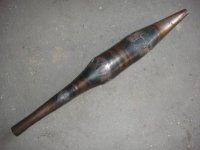 I cut the ends off and hammered out some of the buckled parts on a round stake. 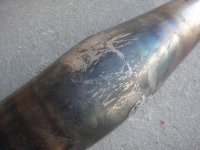 Some stretch marks where I annealed the steel 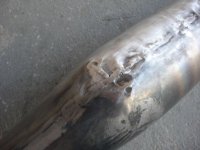 I cut a bit of metal from the 'corners' and rewelded it. 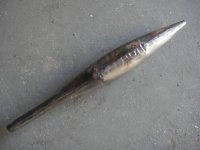 Side view, could have done a with a bit more pressure but it was slightly scary seeing it stretching so much! 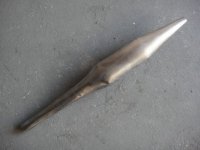 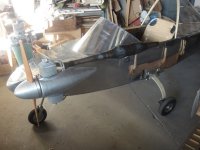 Fits on the plane too!

Would it not be better directed down below the wing?

Would it not be better directed down below the wing?

I don't think it will be an issue. The exhaust will exit pretty close to the standard position. The airflow is pretty high with the exit being directly in the propeller slipstream. I will most likely add a muffler on the back to cut the noise down.

I was just thinking about all those messy cleanups from two stroke models.

I cut a small test panel today for the starter switches. The center switch is three position and will be switched to the side of the engine you want to start, lighting up that particular buttons LED. Pushing the green button will make the starter turn. 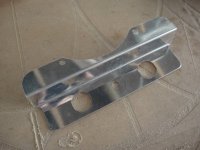 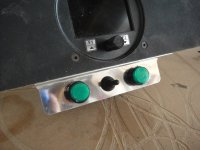 I have also been thinking about the hydroforming and after some more web searching found these two pages on the topic.
https://www.kiwibiker.co.nz/forums/showthread.php/176280-Designing-and-manufacturing-of-exhaust-pipes
http://www.pit-lane.biz/t3107-gp-125-250-why-hydroforming-is-not-as-good-as-welded-cones

There are much better tips and tricks to be found there than the youtube videos.

Basic question to knowledgeable person.....So a tuned exhaust increases performance.....output is higher....is there more stress on the engine? Will it effect reliability or life?

I am not a expert but I would think the nature of two stroke been inherently crankcase supercharged as it compresses the charge into the cylinder, combined with the pulse tuned pipe just allows the potential of the engine to breath as it should.

The pipe tuning pulse sucks away the hot exhaust gas at much higher speeds. This would give a lower heat transfer than the same charge at a slower rate.

At the same time you get much greater suction pulling in the inlet charge due to the pipe. This increases its true compression, not its stated but that suction of the pipe plus the supercharge effect of crankcase compression gives a much higher pressure differential than a restricted pipe would.

End result, you get bags more power at the tuned Rev range, but inherently for any given power level you will produce less heat transfer into the head and piston.

If you go for more power, sure more heat but 90 HP of tuned for the designed rev range will produce lower heat internally than a bodgy restrictive pipe motor making 90 HP . And it will use less fuel, after all excess heat is energy used.

As two strokes, assuming no oil problems only really have one enemy and that is combustion chamber heat. Either through detonation or expansion.

So inherently any reduction in temp should improve rather than harm reliability. That assumes a correctly designed pipe. And correct mixture ratio naturally.

And additional benefit is the extra suction from the tuned pipe on the inlet stroke also increases the speed the piston is drawn up the cylinder as not all the pressure waves energy if consumed by the incoming charge. And the same follows for the exhaust. Thus you get a motor that is freeing revving, more zingy.

That's my take on it, but others may vehemently disagree.

proppastie said:
Basic question to knowledgeable person.....So a tuned exhaust increases performance.....output is higher....is there more stress on the engine? Will it effect reliability or life?
Click to expand...

If you are increasing the power output, then yes it will increase wear and shorten the engine life. If the engine is designed for the higher outputs with a tuned pipe installed you might not notice any difference. The ZDZ engines I am using have been run on methanol at 40+hp reliably. If you took an engine running on the ragged edge of reliability and then tuned it even higher, it might blow up in short order. My opinion is that it depends on the engine design.

I laminated up another MDF/Meranti ply blank for making my next tuned pipe form block. I may however cut down the old one first as the sharper corners don't hydroform too well. I also found some old 4" water pipe lying around and asked if I could cut a piece off. I bored the inside out to get rid of most of the rust and to make the tube round inside. I will use this as a sleeve to expand the belly section into. I will make the belly section on the next pipe form blocks a little undersize so that the belly stretches out to the sleeve. This will allow a bit of extra pressure and hopefully pull out most of the wrinkles at the same time. 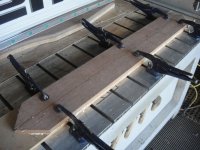 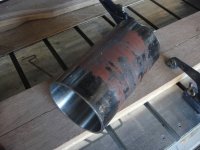 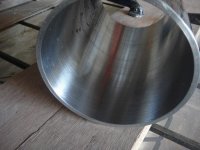 I would think you would be profiling the buck more and preforming the metal more to get the waves past the weld line. Still impressive.

TFF said:
I would think you would be profiling the buck more and preforming the metal more to get the waves past the weld line. Still impressive.
Click to expand...

I had considered that but then I would be close to just forming the pipe halves in a female mold, similar to how I did the wingtips

delta said:
Perhaps a chamber for a similar displacement engine could be addapted.
https://www.ebay.com/sch/i.html?LH_CAds=&_ex_kw=&_fpos=&_fspt=1&_mPrRngCbx=1&_nkw=expansion+chamber+100cc&_sacat=&_sadis=&_sop=12&_udhi=&_udlo=&_fosrp=1
Click to expand...

Not as much fun as making one though 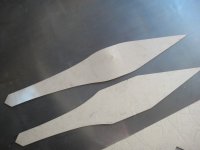 Started today by cutting out a new template for the exhaust pipe steel blanks. 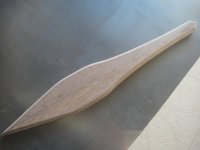 And cut the form down to the new shape 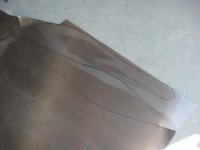 Marked out the cut lines two halves on the 0.6mm sheet steel using the template. 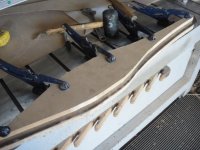 After cutting them out carefully with the tin snips I clamped them over the form block and hammered the edges over with a rubber mallet. I finished up with the flat panel beating hammer. 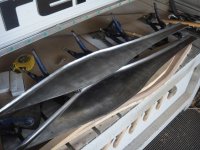 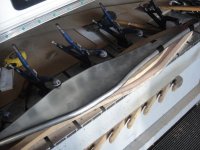 Taped together ready to tack weld. 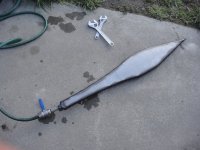 After quite a lot of tack welding I had the pipe sealed up and ready to expand. 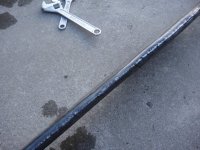 I would prefer to use oxy/acetylene to weld this, but since I have the MIG I used that. 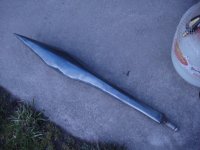 And pumped up somewhat from the mains pressure (60psi). The sides of the belly are pulling in but hopefully they pop out once the full pressure of the waterblaster hits this. Had a few small leaks but slowly getting better at welding the thin steel.

Are these exhaust pipes the beginning of the end of your project ?

Getting closer.... but I still have to do all the wiring and some of the control rigging still to be done. Still plenty to keep me occupied!

If you’re not careful you’re soon going to run out of jobs to do on your airplane...

Once it looks done, he can spend many a hour polishing it.
Then stand back and see her in all her glory.

Polishing is deeply satisfying (I polish everything metal on a friend’s fleet annually) but boy it sure is a lot of work!