When you complete your airplane, please do not fly it; it deserves to be in a museum devoted to individual craftsmanship.

Fitted the flapperon mounting spherical bearings today.
After cleaning the holes and bearings with solvent, I used locktite and pressed them in place. I also staked them all around to make sure the bearings stay put and trimmed the bolts to length. 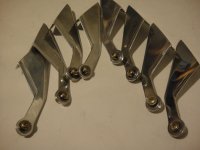 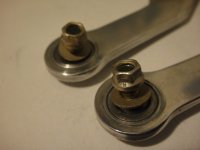 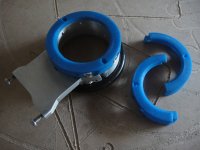 First up is a set of the ignition sensor holders in blue. Yet another thing for the to-do list is to wire up and install some Hall effect switches in these. 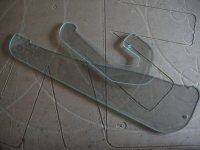 I cut a couple of acrylic templates for aligning the flapperon brackets on the wing and flapperons. 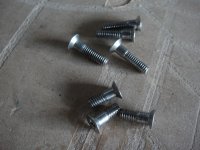 Not quite in the same order that I did things, but I had to shorten 16 of these machine screws for holding the flapperon brackets onto the wing! 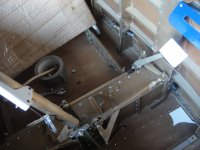 Starting to setup the controls so that everything has the correct amount of movement. I have a big list of small things that need to be done in the right order to get everything adjusted. 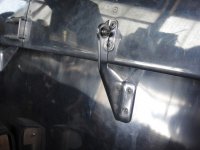 This last picture of a flapperon bracket in place. Winter is here and when I forget, it gets late and too dark for decent photos. But I do have all the flapperon brackets installed on both wings. Someone asked a while ago how they fitted, since the plans say to drill and ream the bearing holes to size once everything os bolted to the wing.
The brackets did need a slight adjustment, they would have been perfect but the wing skin slipped slightly to one side when I was gluing the skins onto the ribs (the glue is pretty slick before its set). This isn't really an issue but it did make the trailing edge a mm or two shorter than it would have been otherwise. This means that the flapperon bracket sits a little further forward than intended. If I made these again I wouldn't drill the wing mounting holes in the brackets as they were slightly off.

I am going to remake some of the 1mm mounting brackets on the flapperons themselves. The holes aren't quite lining up with the acrylic jig.
S

It has been a few months since I last logged on here. Good to see you're still making progress. This is one of my favorite threads.

skier said:
It has been a few months since I last logged on here. Good to see you're still making progress. This is one of my favorite threads.
Click to expand... 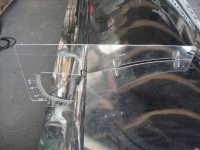 I cut a couple of templates for setting the flapperon travel from 3mm clear acrylic. I have attached the dwg file below for anyone that wants to CNC cut these. A bungee cord holds it onto the wing. 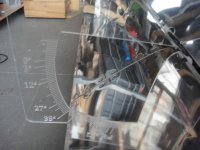 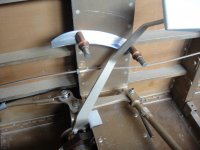 Made the 'notched sector' for the flap lever today, I only made it to cutting the very front flap notch today, sorry no picture, more to come later. 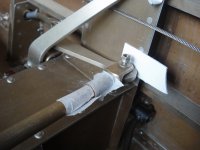 With the front flap notch cut, I could start setting up the front pushrods. The white PVC rectangle is 2mm thick and I used it to set the spacing of the bellcrank from frame 4. The stick is held hard back and to the right when setting the clearance. 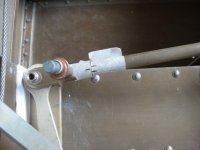 Once the clearance was set, I used some masking tape and sharpie marks to align the pushrod end so that there wasn't any binding at the extremes of stick and flap travel.Took ages to get everything lined up just right. All riveted in place now! 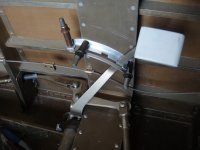 I have the notched sector finished as per the plans, with the flaps at the correct settings (3°,12°,27°).
What is annoying me is that as the lever moves rearward, the pressure to pull the lever out of the notches changes. This is because the sides of frame 4 slope outwards slightly so that as the lever moves back and up, the notches end up further away from the aircraft center line. I can fix the feel of this quite easy but it means making another one with a slight angle on it so the notches are aligned with plane the flap lever rotates on.
I would rather fix this now than be annoyed by it everytime I set the flaps. If I am careful I can copy the notch locations over to a new piece of angle without having to go through the whole tedious process of setting up the flaps at each position.

If it were me I'd leave it. The tactile feed back seems like a positive feature because it lets you know by feel where the flap lever is going.
Sometimes annoying things are useful.

Hot Wings said:
If it were me I'd leave it. The tactile feed back seems like a positive feature because it lets you know by feel where the flap lever is going.
Sometimes annoying things are useful.
Click to expand...

I get that, but what also annoys me about it is that the locking force is lower when the flaps are down, right when the maximum aerodynamic force is pushing the lever forward. If it was the other way around it would feel better! I will make another new one and if it proves to not be right I can put the original one back in

Edit: Another thing that I forgot about is that the lever is slightly angled in the slot because the slot is angled outwards to the rear. It's only a small amount but when the slot is only very slightly wider than the flap lever, it can bind. If the slot was on the plane of rotation, I won't have to twist the lever to properly line it up with the slot.

Flaps in the dark, you count the clicks … both directions.

Version two of the notched sector for the flaps... 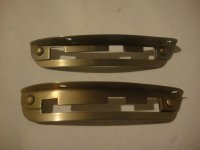 Silently lurking, now.
Love to hear you engineer out loud; it is getting my CriCri juices running
Decided I like your all-alodined look.
-Christian

vondeliusc said:
Silently lurking, now.
Love to hear you engineer out loud; it is getting my CriCri juices running
Decided I like your all-alodined look.
-Christian
Click to expand...

You don't have to be silent!
I think I would prefer the green primer warbird interior look but that adds weight My alodine is a bit old and slow now but it's somewhat easier to get a consistent color. when it was new it was so fast that it was hard to get an even light finish on the big parts.

I have been ramping up my CNC and machining skills. My son is graduating from High School and is an Eagle Scout, so we are going to Oregon for 1 week next week where he lives. Day job and other (many projects) need to happen, so CriCri is pushed back for now, and I have SO little time currently. I gave myself a treat and read a couple pages here; thank you SO much for documenting your adventure. At least I can come read here at any time. Installing a Gecko G540 at work on the bosses 6040, and my USB 6040 is running good also. Excellent work on your machine.

vondeliusc said:
I have been ramping up my CNC and machining skills. My son is graduating from High School and is an Eagle Scout, so we are going to Oregon for 1 week next week where he lives. Day job and other (many projects) need to happen, so CriCri is pushed back for now, and I have SO little time currently. I gave myself a treat and read a couple pages here; thank you SO much for documenting your adventure. At least I can come read here at any time. Installing a Gecko G540 at work on the bosses 6040, and my USB 6040 is running good also. Excellent work on your machine.
Click to expand...

CNC is another whole hobby in itself! When you finally get around to the CriCri project, feel free to fire any questions you have my way.

I had previously made some pushrod adapters for the Hotellier ball links to the flapperons, but when I tapped the internal threads, the tap I had was oversize compared to the M12x1 thread of the rod end itself. I got to thinking and realized that I had an adjustable M12x1 die that I could use to make a closer tolerance tap allowing a much closer adapter fit to the rod end threads. I used some 12mm diameter stainless rod and threaded it so the the resulting tap was ever so slightly bigger than the rod end threads. 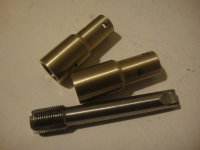 The eagle eyed will notice I drilled the check holes (for checking the rod end minimum thread engagement) at a 45° to the other holes. This should make it easier to check when everything is installed in the plane. The original adapters I made had the check holes vertical, but the side skin stiffeners get in the way of checking it with the pushrods installed. 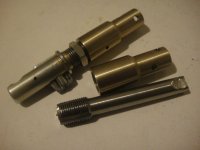 The new adapters came out a much better fit. I drilled off the old ones and riveted the new ones in place. I also took some time to check the orientation the the adapter to give the closest flap setting on each side to 3°. One full turn of the rod end moves the flap adjustment around 1.2°, so flipping the adapter on the pushrod gives me a half degree shift. I then match drilled the new adapter to the pushrod holes. 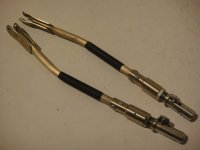 I also added some heatshrink to the pushrods where they run through frame 5.The pushrods don't touch frame 5 when attached to the flapperons, but I was concerned about them rubbing when the plane is transported without the wings attached, as then the pushrods hang down.

This thread should someday become the basis of a book on how to build an excellent Cri Cri. 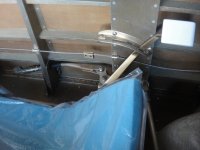 I have the controls mostly setup now, just need to adjust the elevator. I am considering painting the inside of the fuselage under the fin white to make inspections through the window easier.

I also did a quick weigh in, current weight is 58kg.

I decided to paint the inside of the rear fuselage where the inspection windows are. The alodine finish made it very dark when trying to see in through the clear panels, hopefully the white helps show the linkages up better for the pre-flight inspections.

I masked everything out and gave the surfaces a clean with paint thinners and sprayed on a single coat of white lacquer. In hindsight, I should have also given it a jolly good blow out with the compressed air as some dust blew out from somewhere when I was painting the inside and stuck in the paint in a couple of places. I might use some thinners to wipe the paint from those areas down and respray them tomorrow. 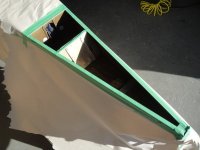 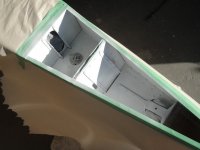 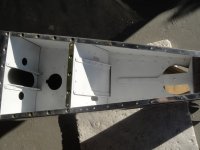 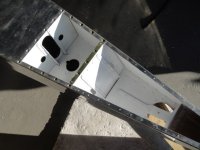 Finally got my ACS order of bolts and stuff.

I drilled out the crankcase holes to 6.5mm and used four AN4-47A to hold each engine together. I also used up some of the other bolts on the music wire clamps.

I used some rubber cut from a car tyre inner tube to wrap around the plywood linkage bar and the anti rotation links. 7 grams of rubber bands around each of the 4 locations should damp down the vibrations from the engines..

The engine mounts sorted, I heated up the prop hubs and fitted them onto the crankshafts. Very pleased with the results! 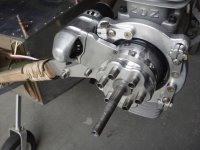 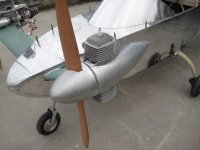