Crashes in the News - Thread

b7gwap said:
Also, sorry for derogating the press, I find it hard to respect most of them. They seem to have a dearth of technical knowledge yet want to project themselves as the opposite. That would be forgivable if they didn’t seem to additionally all have a ghoulish desire to enrich themselves as a result of death and tragedy. Think Don Henley’s “Dirty Laundry” or Tool’s “Vicarious.”
Click to expand...

Don't get me started on the media. According to the media, my wife and I died in an airplane crash almost 45 years ago. On the 11 o,clock news and my parents saw it but my 2 teenage children were at a football game and missed it, and the other was away from the TV raiding the refrigerator.
They have to look up to see the bottom of a snake.

Why be sorry? It's deserved, generally.

One of them was a 2-month-old girl.

Had an hours worth of fuel on board 10 min preposition then 45 minutes flight - ???
Like the cop chopper that flattened a pub in England.
Why does it take a Miracle?
B

b7gwap said:
Anyone know any details about this CH750 Cruzer accident?
Click to expand...

From the photos and address given it was headed back toward the airport. That building is right under the final approach for 30. I would guess loss of power on landing and then CH750s don't glide well.

May not be anything you don't already know, but....

This is preliminary information, subject to change, and may contain errors. Any errors in this report will be corrected when the final repor...

I have NO idea if the engine is part of the cause, but if by some chance this is an engine failure/breakage then the first thing that caught my eye is that it doesn't look like an "aircraft style" engine to me. Maybe someone here can identify the engine type or general family of engines from this screenshot: 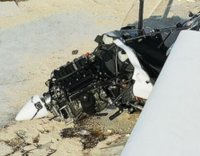 It’s a Viking Viking & Valkyrie Power they are Honda engines modified for aircraft use by Jan Eggenfellner. The Zenith builder community is a focus market for Viking. This was a 750 Cruzer, a 750 designed more for a cross country mission rather than STOL. The way it impacted the roof and came to rest indicates loss of control in flight to me
Last edited: Jan 17, 2022

Is a Honda VTEC likely to be an Eggenfellner deal, or are there other companies doing any significant number of Honda aviation conversions?
Last edited: Jan 17, 2022

It's a Viking engine.

thanks everyone for the actual investigative journalism. I’m glad dude is going to live. Have to dig into my zenith community to see if I can learn anything more about the failure.

For the record, I’m finishing up the empennage on a ch750 STOL, going to be hanging a 320 on it since I live at the same altitude as the accident airplane. Roger from Zenith has said that’s the heaviest engine they benchmarked for the 750 stol, and I wanted Lycoming engineering and don’t mind losing some useful load.

I don’t know much about the Vikings other than the subject seems to start flame wars, which I don’t want. Is the 130 one of their more commonly built versions or is this a newer offering?

Can someone confirm the Viking 130 has electronic ignition subject to "electrons stop, the engine stops" syndrome of recent T-51 fame.

Don't be too quick to blame the engine.

jedi said:
Can someone confirm the Viking 130 has electronic ignition subject to "electrons stop, the engine stops" syndrome of recent T-51 fame.

Don't be too quick to blame the engine.
Click to expand...

The Viking uses EFI-so yes, no electronics, no engine. I have no idea if the plane had a backup battery- as it should have- to ensure engine operation.

If I had to speculate I would first look for a fuel rather than electrical issue. Without fuel pressure in a very specific range the engine will not run. The Honda is a Direct Injection engine meaning it has an electric feed pump that supplies a mechanical high pressure pump much like a common rail diesel. These mechanical pumps are, in my experience, less than reliable over time and while yes, they are extremely fuel efficient, they fail too often for my liking. Even in Hondas.
M

CX4 went down in North Carolina. Pilot is unhurt. Some report that he hit a herd of birds.

jedi said:
Can someone confirm the Viking 130 has electronic ignition subject to "electrons stop, the engine stops" syndrome of recent T-51 fame.

Don't be too quick to blame the engine.
Click to expand...

My dear sir...it's a *package*. If it requires electronic ignition, and the electronic ignition is not reliable, then the builder would have been better off to install a traditional certified engine with a traditional pair of magnetos. You can't blame the engineers at Ford, Subaru, or Volkswagen for the loss of power of an auto-engine conversion, but the accessories are all part and parcel of an engine installation.

Whether an accident reflects *specifically* on an auto-engine conversion company does depend on the builder's decisions. But that rides on whether the conversion accessories (ignition system, PSRU, radiators, etc.) are provided in the kit, as well as detailed installation instructions. If the assembly instructions provides these accessories as well as specific detail on wiring, protection, etc. and the builder didn't follow those instructions, that's less finger-pointing at the conversion company. An old saying goes, "It's impossible to make anything fool-proof, because fools are so ingenious."

In my 1998-2020 homebuilt accident database, there 4133 fixed-wing aircraft that had traditional aircraft engines, and 484 accidents with auto-engine conversions. The traditional engines had 25 cases out of the 4133 (0.6%) where magneto or engine controller failure caused the accident. The auto engines had 33 out of the 484... 6.8%, over ten times the rate.

The fact is, the average homebuilder can't implement auto-engine conversion powerplants with the same reliability of traditional engines. And half of homebuilders are below average.

from the several pictures in the link.....I did not see any other marks on the roof.....so it looks like it plopped (stalled) right at that spot.....the only other comment might be that is one tough roof, perhaps he hit at a support.


proppastie said:
from the several pictures in the link.....I did not see any other marks on the roof.....so it looks like it plopped (stalled) right at that spot.....the only other comment might be that is one tough roof, perhaps he hit at a support.
Click to expand...

The 750 STOL requires you maintain some power all the way to landing. Otherwise it drops quickly. You can't truly 'flare' one, or it just stops, so that may be what he tried.

I don’t know how differently the Cruzer flies from the Stol, but if you look at the vertical, this was a Cruzer for sure. Either way, yes strong roof, light plane, glad the structure kept the pilot alive. Hopefully more comes out about why the accident happened, engine related or not.