Crashes in the News - Thread

One Dead In Crash of Skytypers North American AT-6

The crash during practice at Wilkes-Barre, Pennsylvania, happened on Friday afternoon. One is dead In a crash of Skytypers T-6

An event far less common than people think. Also, one witness reported, "From my vantage point, it could have been a lot worse. He was somehow able to keep his seriously disabled plane away from the terminal and basically anywhere there were people. In that effort alone, the guy is a hero, plain and simple. "

I think they (Geico team) had a fatal about 5 yrs ago? Long Island/Jones Beach area?

Turd Ferguson said:
I think they (Geico team) had a fatal about 5 yrs ago? Long Island/Jones Beach area?
Click to expand...

The crash happened just after noon in the freeway’s southbound lanes at Via De La Valle. Two people on board the plane were not hurt.

TFF said:
I have to accuse my self of this, but show a pilot an airplane and say go fly, they automatically get stupid and say OK. Get a ratty airplane taxi up to a friend and say get in. They will get into a plane they have no history in a second. It flew in, it will fly out.

Mechanic is different. They tend to snoop like a blood hound not trusting anything. Here is a dilemma, if you are piloting, don’t mechanic and vice versa. I had flown down with my old boss to pickup another helicopter. I was to fly one back, he was to fly the other. We get to the fuel stop and are going to hot fuel and go. He walks up to me and said he lost the electrical system. It was getting dark so we stayed the night. But because he told me this while fueling my mind went into mechanic mode, so when I took off from the pumps, I was not in pilot mode. I readlined the TIT for a second. Normally I wouldn’t have been close. If you do mechanic your own stuff, you literally have to have two mindsets. You will hurt yourself if you don’t.
Click to expand...

Job of ferrying an airplane about 700 mile for the new owner. Large shop just did the new annual, and all radios just came back from the shop. Every was signed off and supposed to be good. Sharp turn on the ramp to get fuel one of the nose wheel steering rods came loose. I fixed it. Latter all the radios quit except the transponder just when it was getting dark. Ended up making it to a large airport and leaving it for 3 weeks.
Don't ferry airplanes anymore.
Was ask to do a repo on an airplane and fly it back to Kansas. NO. Don't do that either.

The crash happened just after noon in the freeway’s southbound lanes at Via De La Valle. Two people on board the plane were not hurt.

Whoever it was did a pretty darn good job. Nobody hurt and the airplane appears repairable. Interstate 5 in the middle of the greater LA area is a pretty crowded patch of asphalt !

Apologies for the slight thread drift here. Among many other things, Andy Travnicek, who flew west in Geico Three nine days ago, was an active instructor at my local, 7B3, Hampton, NH. While the funeral is tomorrow, the airfield community had a big send-off last night. Complete with banner tow, many Toasts, Music, and in Air Force tradition, the piano burning ceremony. Big crowd, the entire airfield, Air Force comrades, friends and family, CAF reps out of Dallas. As the banner read: Fly High, Trav.

Strange. 20 years in the Air Force and I never even heard of a piano burning ceremony until now.

Location
US Territory of Guam

RIP and Respect. Sad to see such loss.
Apparently piano burning began as a British thing. A truly fitting symbol.

Piano burning is the act of setting on fire an acoustic piano, most commonly an upright, as either a ceremony or a form of performance art. Piano burning has been a tradition in the Royal Air Force since the period between World Wars I and II when, according to one version of its origin, pianos...

Rhino said:
Strange. 20 years in the Air Force and I never even heard of a piano burning ceremony until now.
Click to expand...

I never heard of the Royal Air Force doing it but if you ever knew Jerry Lee Lewis ...


I only have one Jerry story to tell but I'll leave that one alone ...

A USAF B-2 stealth bomber sustained unknown damage during an emergency landing at Whiteman Air Force Base in Missouri shortly after midnight Tuesday morning (Sept. 14). The Air Force reported there was no fire and no one was injured. The crew had reported an in-flight malfunction during what was described as a routine training flight.

The Air Force Global Strike Command issued the following statement: “A U.S. Air Force B-2 Spirit experienced an in-flight malfunction during a routine training mission and was damaged on the runway at Whiteman Air Force Base, Missouri, after an emergency landing.


“The incident is under investigation and more information will be provided as it becomes available.”


Twenty-one B-2s were built. One was lost in a 2008 takeoff accident in Guam, in which no one was injured. The Air Force investigation blamed that mishap on heavy rains that compromised the aircraft’s instrument sensors. The B-2 that crashed this week has been stationed at Whiteman AFB since 1993, according to the Air Force.

Probably to prevent news helicopters and drones. Still I believe a top secret airplane on the ground. The one in Dayton had to be cleaned up before display. All the F-117s are under lock and key and when the B-2s retire, I bet the same will happen. Not until stealth is not a thing anymore.
M

Local fatal plane crash this morning. Denver TV identified the plane as a Stearman. I don't know yet but it is probably my new neighbor at the airport. This is his Stearman last week. He just moved here in the last few months. 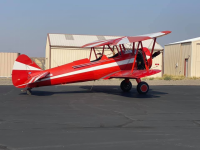 I just saw this posted as the cause of accident: "Acrobatic plane went into inverted flat spin and did not recover"

The pilot also had a beautiful RV-8 that he and his wife flew all over in. It is really a shame. Nice guy. He was going to fly Young Eagles with us next event.

Like most military bases, Whiteman AFB is already restricted, so news helicopters and drones can't fly there without permission. The TFR is still probably to limit visibility from outside the immediate area of the base to preclude any imagery from being taken that might reveal sensitive information though, as TFF said. Stealth technology doesn't involve just the skin of the aircraft. While the basic internal structure is primarily like other aircraft, there are parts of it that are part of the low observable technology, and that might be revealed if the structural integrity was violated during the crash.
1

T45 crash in Fort Worth:

2 injured after a military aircraft crashes in a residential area of Lake Worth, Texas

A pilot instructor and a student were hospitalized Sunday after each ejected from a military training jet that crashed in a residential neighborhood in Lake Worth, Texas, on Sunday, according to the Fort Worth Fire Department.

A woman was taken to a hospital with minor injuries Thursday after the small plane she was in crashed and flipped over in Weber County.

Any input on this one? Monet Mini crash in Oklahoma

dwalker said:
Any input on this one? Monet Mini crash in Oklahoma

Dan is not familiar with the type.

From "Thread Drift" pages, post #5 "Latest example: Two CFI pilots in a Cessna 150 did a 180 mile distant out and return last week and it was great fun, but then the destination was an airport (KALW) for a day of motor gliding. We wouldn't do that by car. "

That day of motor gliding was done in a Monet Xenox CLS which looks to be the model in the video.

A check of weight and balance was a part of the pre-flight and we were mid range.
FWIW - The airplane flew fine.

Don't know why the accident plane was so far out of the CG range. This looks to be a "Darwin Crash".