What you need is a major redesign of this tail, which includes sizing the tail surfaces for proper stability and control, a loads analysis and new structural design.

When this is done you may find that the new tail is heavier, the component cg is further aft, thus moving the whole airplane empty weight cg so far aft that you need a lot of ballast in the nose, and that you have to reinforce the attach points of the struts 1,2,3 on the front fuselage side to handle the increased loads.

I think it can be done but it is not simple.

Thank you for responding! I do agree with everything and didn’t think that this is going to be quick and easy project.

I am glad that you think it’s doable. Some smart people were telling me the same thing. really would like to know if you can help me with this and at what kind of cost.

To address future CG problem I recently moved fuselage forward by 2 inches. At the same time fuselage incidence was changed by 2°. You can see it in my picture below. My primitive calculations did show me that this should be pretty much sufficient to compensate new longer and slightly heavier tail. 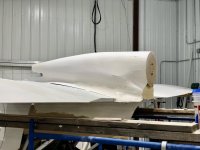 wsimpso1 said:
I do not know what PiperCruisin is trying to say here, but things are bolted together in composite structures with bushings and beefed up laminates local to the joint.

I am not sure what materials he is preferring, but the bolt will have to be tightened enough for preload to exceed live loads in the joint, so materials must be stronger in compression than the forces the bolt puts on it. Shigley suggests a region three times the diameter of the bolt shank is under serious compression.

This is part of why engine mounts are attached to airframes they way they are. If you have four mount points, typically only two will be triangulated. Think on that.

What is going to be hitting the aft fuselage that we need to worry over?

Unlike the wonderful treatises from Billski, I don't like to type that much. I'll try to explain the points I'm trying to make better.

The design really depends on the joint and what is trying to be accomplished.

I do a lot of bolted joints at work, but mainly in steel structures. The typical bolted joint relies on preload to prevent slip and loosening. The design of the abutment, supporting area/frustum (see cone of compression), bolt stretch plus preload reduces the fatigue load on the bolt... if you have tension loads. One prefers to load bolts in shear, but it is not always possible. If you are designing a bolt that has significant tension loads then you need to have an insert to take the crushing load.

For bolts in shear, preload is used to prevent joint slip. If the joint slips, it can start loosening, egging out the hole (bearing stress), losing preload... a vicious cycle. However, in aircraft, a bolt may act like more like a dowel/treaded rivet and requiring minimal preload if match drilled and with tight tolerances (and using some sort of nut retention). In this case, the insert or potting may not be needed. Maybe the skin is too thin and requires an insert to reduce bearing stress with a smaller bolt.

How much preload is required depends on the joint loads. 75% is typically used, but it could be very low or 90% or maybe even to bolt yield (in tension applications you're trying to avoid gapping the bolt). In very high shear applications (not when acting as a dowel), sometimes a low torque is applied and then followed by a "torque turn". This provides a more accurate method to reach yield by achieving a desired amount of bolt stretch. A Tutorial on the Basics of Bolted Joints provides a good introduction to bolted joints but aircraft and composites put a different spin on things.

Thermal coefficients of materials come into play with multi-fastener fittings like a bathtub fitting. A typical engine mount will not be as constrained. If the fitting is aluminum and the composite it carbon for example. The aluminum (~23 in/(inF)) will want to expand and contract with temperature while the carbon composite (~0) won't move much at all. This will add to the external loads. I don't know what the ultimate design looks like here, but probably not an issue.

As far as damage tolerance goes, what could hit the aft fuselage? I don't know, a wrench, hail, rocks... Anyways, 2 plies is better than 1. 3 is better than 2. If you have core, you have 2 on one side and 2 on the other. 2 is probably a bit marginal. Adding a few local plies for damage tolerance around critical joints where you probably want some additional for better bearing anyways is probably something to think about. I'm guessing that MAP is way ahead on this.

Smart and educated skeptics sending me private messages and telling me that I shouldn't make my tail any longer or any bigger. Their biggest argument is that with increasing arm you are dramatically increasing load on all existing components.

So, naturally I am walking around with this question in my head that I need you guys to answer for me.

In original configuration tail balancing load was concentrated in 4 and was pulling down on 3. This way hardest working member was tube between 3 and 4 and 6 mm bolts = only one at 4 and only one at 3.

Any stupid Russian with half a brain would understand that if you make existing tail any longer will break those bolts in flight. But we're not doing that!!!

I was the under impression the beauty of composite construction is that we can make any shape we want as one unit and we can spread this load between 1, 2, 3 and 4!!! it is obvious to me that this approach is so much stronger and tail can get 2 feet longer with no problems at all. Or I am missing something again here??? 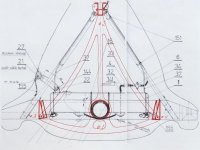 The mounting points have not changed their strength. A 2 ft longer tail will have 2 ft more leverage on the mounts in the air. Static on the ground is not as important. The tail needs to be as light or lighter because it’s 2 ft longer for weight and balance reasons. The mounting has to handle the longer leverage. I think the question is where it bolts to what you are not changing, are those mounts strong enough?

TFF said:
The mounting points have not changed their strength. A 2 ft longer tail will have 2 ft more leverage on the mounts in the air. Static on the ground is not as important. The tail needs to be as light or lighter because it’s 2 ft longer for weight and balance reasons. The mounting has to handle the longer leverage. I think the question is where it bolts to what you are not changing, are those mounts strong enough?
Click to expand...

We are adding more mounting points and spreading them apart creating much better situation. Or am I wrong again? 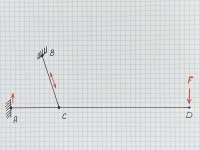 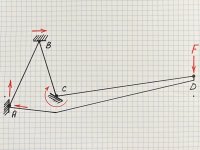 More is better if they are done correctly.
S

My two cents. Up to 40-50% of your mtow is in pilots. Plus fuel tank is also behind seats ? So why not to extend that new tail futher, and replace 120*2 tube in whole lenght ? And make seats together and as structural bulkheads. And then all that is left are vertical tubes attachments + struts and landing gear to rear ones. Give me basic dimension, i will draw it as i can see it.
You must log in or register to reply here.
Share:
Facebook Twitter Reddit Pinterest Tumblr WhatsApp Email Link