But will it fly?


I think the key thing to flying the Woodhopper, looks to be to me, that you got only 3 things between you and death, or getting your bones all broken, and your body all mangled. So um... practice everything... cautious and slow... over and over

1. You got your elevator & rudder controls

2. You got your throttle

3. And you got your brain

While you are in the air, those are the three things you need to be focus on using right all the time, every time, and there is nothing else between you and a whole lot of hurt.

If you have to majorly correct for something, it's probably already too late.

And now the mystery.... You love mysteries right?

There is one mysterious thing on this plane, that I've never seen before, and seems to serve no useful purpose... unless perhaps they are load weights, to balance the plane?

Short metal square tubing, where no metal or useless weight should be, bolted through spar.

Your guess is as good as mine.

Here is my wild guess: the guy that owned this, Frank Joslin, of F.A. Joslin & Sons Aero Craftsmen, was in business at the airport with a huge hanger, since 1969. His son inherited and took over the business. At some point, this plane was built simply to advertise their business, as a display "showpiece" maybe to take to trade shows or airshows or such. The wings were left uncovered to show their skill at aircraft building and rib work. This would explain the fancy company lettering and phone number, city and state on the tail feathers. These metal pieces were put on, perhaps, to hold some sort of sign posts to slide into them or hang from them?

When the son died, the hanger and its contents were sold by his widow, to a fellow, that got his friend to list it on Barnstormers, from where I bought it... because he had no use for it and just wanted it gone... more space, not in his GA world view future plans at all.
Last edited: Oct 24, 2016
A

Looks good Chopper! Sorry I wasnt able to get to it first.....

Its falcon5052. Im not sure what happend to my falcon5052 account.... but the account got cancelled? Ill be sending messages to the admins about it.... Anyway. lots of good stuff you got it looks like.
T

Wow! you will have a classic UL museum soon. The Woodhopper does not look bad at all. cfair2 for plans. I remember that in Popular Mechanics thinking I could build that.

Falcon/Authmion: Lucky I still had your number in my phone and texted you huh... The Woodhopper is still sitting out in my front yard in the dark right now, just like the photos I took this afternoon in the pictures. Somebody driving by honked at me while I was finishing setting it up to photo.

TFF: I know, what plane screams more HomeBuilt than something that was one designed exclusively as a contracted write up for a Popular Mechanics "build your own airplane" garage armchair mechanic... article. The Woodhopper is practically the ugly duckling poster child of home built airplanes.

If people around here contributed or cared, I'd be half disposed to donating my $99 investment that got the ball rolling as the HBA poster project community plane to restore... I'm keeping one of the engines though for my VJ-24W! 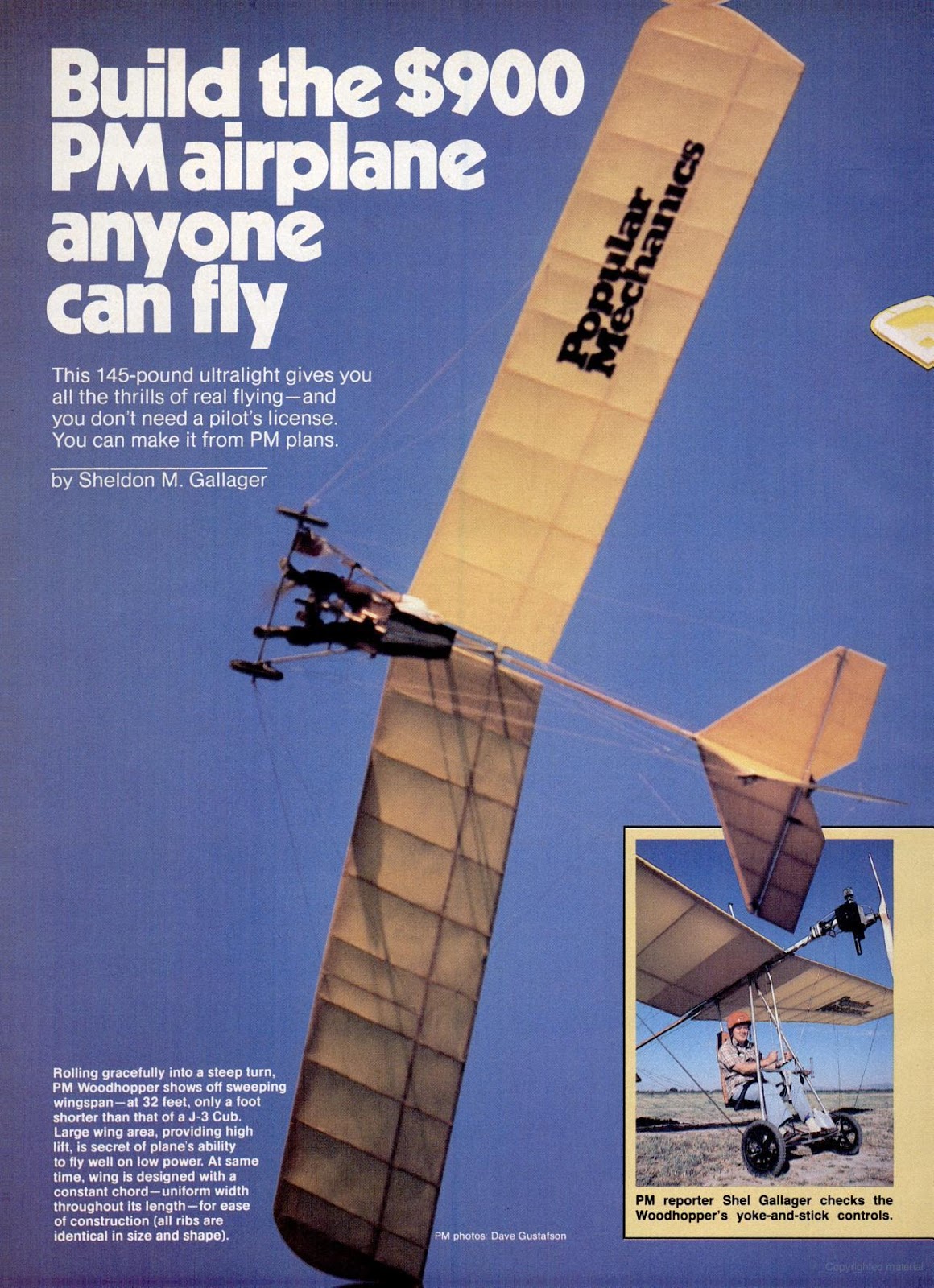 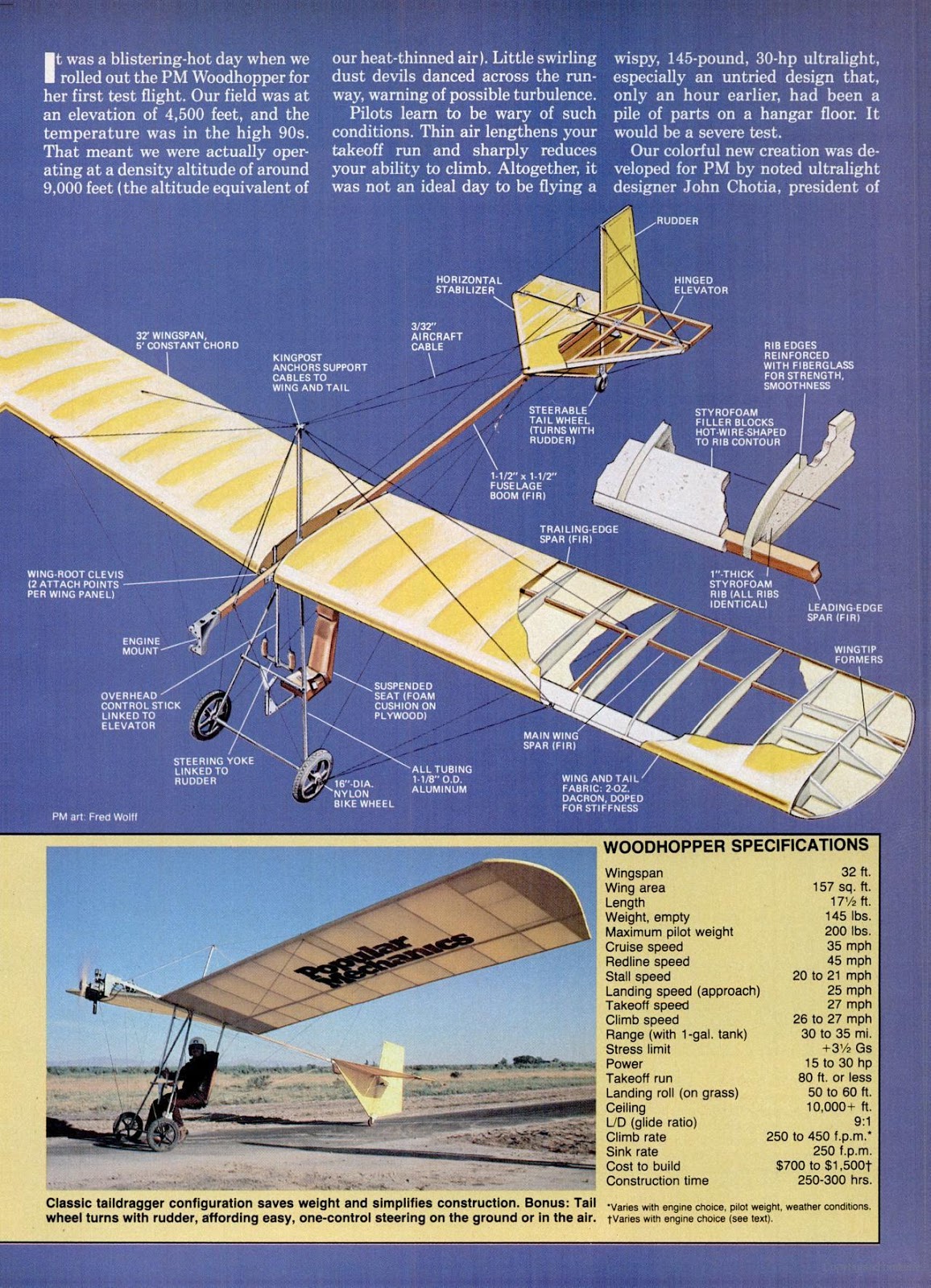 Yea definitely thanks for reaching back out to me! I had been meaning to get back with you. but I've been dealing with a bunch of life stuff.... bleh. Looks like it ended up being a pretty good haul! I do know the woodhopper was initially designed to be foam ribs, but you can redo the wooden ones with a jig!
R

You are one brave lady... I admire that!!! Not sure I would strap myself into that Woodhopper with a chute...
R

You are one brave lady... I admire that!!! Not sure I would strap myself into that Woodhopper without a chute...

Time to start painting in pixels... a theme and color scheme for a very funny curious oddity of a plane... retro black and white woodcut stenciled... Alice in Wonderland Themed Plane

Long before there was HBA, there was... Popular Mechanics!

I've met a lot of airplane people who said they dreamed of building a Woodhopper a very long, long time ago... it must of made a splash.
Last edited: Dec 13, 2016

Wow! 1.5 x 1.5 fir tail boom! I wouldn't even try to taxi that let alone be suspended from in a plywood seat. Interesting 2 axis design.

I hear ya! I think this segways nicely into another thread: DRINKING AND FLYING :gig:

All the strength is in the forest of cables surrounding the boom. The boom ends up only taking the compression from the cables, and virtually no bending loads at all.

Those pieces of square steel tube were put in to make a bookshelf, or display, or some other "store fixture" out of the wing. Chotia would not have put them in there on purpose.

What you got there is a set of patterns to build a new one. Even if the holes are in the vertical center of the spar (the "neutral axis"), there is no justification whatsoever for the holes to be there. Sorry, you're gonna be building new wings.

Agreed... my guess was maybe as sign stick holders? I have to rebuild the wing anyway as some of the wing ribs were broken when I bought it. Unfortunately I practically demolished the rest of the ribs someone painstaking labored over once upon a time, on the trip home. I should of let the guy wrap the whole wings in seran wrap like he offered. Would of put them under compression and kept the whole mess from bouncing back there on the trailer. I'll replace them all with blue foam ribs instead. But yeah, I'll be replacing that piece. My WTF bells went off immediatly when I saw those metal square tube thingees.

Like Topaz said, the tailboom just takes compression mostly. The plane is mostly a plane of wires, which is oddly, exactly why I bought it. That and because its one of these orphaned ultralights, even by vintage ultralight standards. A curiousity like the Volmer. Fiberglass is also used on the tailboom... motor mount area.

I hope to trailer both planes to airshows together, in the future... and I'll bring some cosplayer friends dressed like Alice, the White Rabbit, Dorothy, and the Scarecrow as my public ambassadors for my two little curious odd little planes. Maybe also a stuffed animal terrier in a picnic basket, and a playing card army, if extras want to volunteer. I intend to make it quite a colorful little Flying Circus spectacle.

Should be fun And... um.. different

Gets us all in the door without paying admission...

At one time, the Dollar Store had a bizarre theme of pink flamingo stuff on sale... pink flamingo everything. I didn't think that would ever happen again, so in my particular quirky style, I "got while the getting was good", and bought a ton of cheap pink flamingo party decorations stuff, and threw a Mad Hatter Tea Party with my friends, so I've got a box of Alice "stuff" stashed away in a box, that I collected or made. It's a drizzly day outside, so I'm not going to fiddle fart to set up a photo much, but you get an idea...

The Weedhopper was a nice flying machine. Slow, ponderous, but fairly easy to fly.

The Woodhopper was also a nice flyer, fragile, so it was good that repairs are easy, if tedious when it comes to wing ribs.

The Weedhopper Rocket? Apparently suffered from tail stall with a highly loaded close coupled Horizontal Stab. At low altitude. During a high speed show off pass for spectators. ( Please correct me if I'm wrong on that )

I have nothing bad to say about John Choita. I will say that a LOT of people mess up by making high speed low altitude passes for spectators. Few have any experience fast & low. And fast & low kill experience pilots too. ( I won't even get into the high speed pass with a high g pull up that looks so cool.... )

Topaz said:
All the strength is in the forest of cables surrounding the boom. The boom ends up only taking the compression from the cables, and virtually no bending loads at all.
Click to expand...

Yeah, until you find that the grain makes it warp due to unreleased internal stresses and then you have a proper real world Euler demonstration
R

So what's the differance between the Gypsy and the Weedhopper? ...just the pod?
W

The Gypsy was made of aluminum rather than wood and it had ailerons. A friend of mine built and flew one back in the 80's. He used a Rotax 277 instead of the Chotia and it flew remarkably well. I always liked the looks of it.

Watch the old video on YouTube. Chotia found that what people say they want and what they actually buy are two different things. He designed Gypsy because of popular demand, but pretty much all he sold were Weedhoppers. Gypsy out performed Weedhopper in every way.
Wish I could have scored two Chotia 460 square-head brand new engines for $100! :ermm:

FritzW said:
What specifically is wrong with the Gypsy: Flying qualities? Structural problems?