Cessna tests new “Skycourier” and it’s actually not too terrible

cluttonfred said:
Be careful what you wish for! I can definitely imagine the day when there will be a mandatory hard luggage standard, one for carry on, one for checked, and everything must fit inside, period. Overhead bins will be sized for exactly that standard, just a series of slots for one piece per seat, and checked luggage will be small (half size) or large (full size) and would also fit in racks, all automated loading and unloading.
Click to expand...

Carry-on type bags are already sized for overhead bins, and the idea of identical stowed bags occurred to me, but you would still have the issue of baggage compartments are not square, so you would have a lot of wasted space, unless maybe you had triangular luggage or something weird like that.

Riggerrob said:
Dear Angusnofangus,
LD3 baggage containers are designed specifically to fit in odd-shaped, under-floor baggage compartments. That is why one corner is missing. The missing corner can be turned down to fit a pair of LD3s in a semi-circular belly baggage compartment, or turned upwards to match the circular curvature of main cabins in cargo planes.
Click to expand...

Baggage containers would certainly be the easiest and fastest way to get the baggage on and off the plane. I think that they are used in larger aircraft ,747,777, A380.
V

On the typical domestic hub-and-spoke passenger flights, I don't think containers would be an improvement. Connection times are short, every bag needs to get sorted immediately planeside and sent to its proper gate. And, bags are getting onloaded right up to the last moment. Filling and emptying containers would just be an extra step with zero/minimal net labor savings compared to the present method.
Over a period of about 10 years I went through Charlotte over 300 times. Sometimes I had to sprint to make my connection, but only once or twice did my checked bag not arrive when I did. Great work by US Air/American, and I doubt the record would have been the same with cans.
T

The bigger issue with bags is carry on. Most of the time I fly, there is request to put bags in the cargo. CG issues as much as space. Bags get loaded quite quick. Loaded on the plane or a can, they still have to be loaded. Twice if you have to load a can with bags and then loaded onto the plane. It’s a messy mix.

For those curious about current cargo/baggage practices, my work Airbuses (319s, 320s and 321s) have a mix of hand-loaded and containerized cargo loads. In some cases it depends on the airframe (some don’t have the necessary floor rollers installed) and sometimes it depends on the airport at either end of the trip (they don’t have the required loading/unloading equipment). For us it seems that carry-on is encouraged as I suspect we haul a good bit of well-paying cargo in the belly.
V

I've been on an "airline" that uses the same cargo bay for people, their baggage, and other cargo. Lots of flexibilty: Fold down as many fabric seats/load in as many palletized seats as needed, put the bags on pallets and cover with clear plastic/nets, and the rest of the bay is available for any other palletized cargo or rolling equipment desired.
The win for the passengers: They can see their bags, they know they aren't misrouted somewhere. And, when they get to the destination, their baggage pallet gets taken to a spot (inside, on the ramp, etc) and the passengers are responsible for onward movement, getting it on the next plane, etc. Surprisingly little grousing!
B

Topaz said:
Putting my ignorance on display, but I grew up near an airpThe ort (KPOC) that became a FedEX and UPS node in their overnight runs. Late evening would see a slow string of Caravans, and other light-cargo aircraft, coming in, being hand offloaded onto trucks, and then leaving again. Now, of course, the goal seems to be to use standard cargo containers and just shift them from the airplane to a truck using a transporter that can change height to match the airplane's cargo bay, and then drive over to the truck, lower or raise, and then they just push the cargo pod into the truck.

Nice, but I've always been curious why they don't take it a step further: Make the airplane have either a swinging nose, or clamshell tail with C-119-like booms, and "kneeling" landing gear (Like a C-5 or C-17) that adjusts to the height of the truck bed. Back the truck up to the open cargo door just like the bay at the warehouse, loadmaster on the plane adjusts the gear height from inside the airplane's bay, and you slide the cargo containers from airplane to truck (or vice-versa) without the need for a separate vehicle. I mean, if you're going to be custom-designing an aircraft for your cargo operation anyway, why not go the full nine yards?

Like I said, since I have exactly zero experience with aircraft cargo operations, I'm sure I'm missing something vital, but this seems like it'd be a big cost-saver in the long-run. Yes, the airplane takes a bit of a weight penalty for the "kneeling" landing gear, especially, but the system would be much faster and wouldn't require pre-positioned "transporters" to shuffle cargo between airplane and truck at every airport.

all this about aviation, airplanes, helicopters,
all-aero.com

all this about aviation, airplanes, helicopters,
all-aero.com

I have a picture of a Picture of it at 7S5 on it's way to Alaska
Click to expand...

That is one truly ugly airplane. Not to mention that it is even boxier than a Shorts 330/360. The Shorts at least has slightly rounded corners of the fuselage.

I love how the Hawk could be the only airplane ever to have a turbine removed and a radial installed.
R

The difference between GAFHawk and Skyvan is that Skyvan corrugations are on the inside!
Hah!
Hah!
Several other groups have proposed similar “single-engined Skyvans” but none have flown as prototypes. I guess there is just not enough light-weight, odd-shaped cargo.
U

fixnflyr said:
I need one to put my IF1 racer in and fly it to Reno.
Click to expand...

Why restrict yourself to carrying it in the plane? 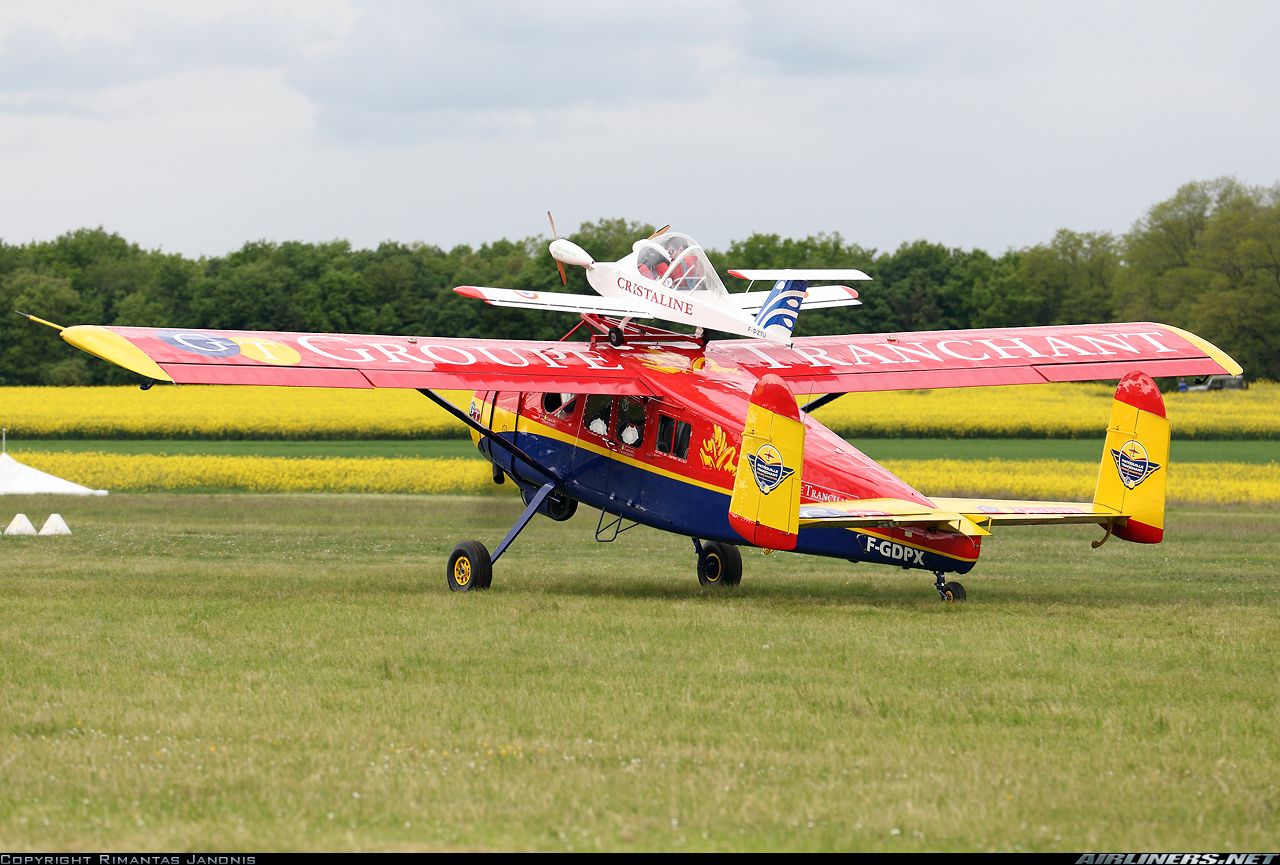 I wonder what the smallest plane would be that you could piggyback a little racer on?

Tiger Tim said:
I wonder what the smallest plane would be that you could piggyback a little racer on?
Click to expand...

Would probably have to be bigger than the Broussard but the Max Holste Broussard were a pretty good deal couple decades back.

fixnflyr said:
I need one to put my IF1 racer in and fly it to Reno.
Click to expand...

Or, "Crazy Dave" Morss used to have an old school bus that he used to transport his racers in, but it wasn't as far as you need to go.

Actually, if you're smart, and using ideas being talked about in this thread, you will do a lot better by building a wooden box with airplane supports in the box, and putting itup for bid on U-Ship. That way you can relax, take an airliner, stay at work for two more days and make enough money at your work to pay for the U-ship trucking.

Victor Bravo said:
Actually, if you're smart, and using ideas being talked about in this thread, you will do a lot better by building a wooden box with airplane supports in the box, and putting itup for bid on U-Ship. That way you can relax, take an airliner, stay at work for two more days and make enough money at your work to pay for the U-ship trucking.
Click to expand...

I shipped my airplane in 2017 except it was to Thailand for the Air Race 1 Cup race along with 15 other airplanes right after Reno. Unfortunately a couple of the racers were damaged due to rough handling of the containers. I have though about having a dedicated shipping crate which would make travel much easier, but a delay of a couple of days could waste thousands of dollars and miss a chance to race after all of the preparations. Also it would be much cooler to have a big cargo homebuilt which could come in real handy as a flying camper at Oshkosh and Sun-N-Fun.
I have pondered piggy backing a racer on a Beech 18 which might be doable. The certificate would have to be changed to Experimental Exhibition on the -18. I don't have the budget for a Twin Otter, if I did I would race the unlimited class!
Here is the video of the Thailand race. The Silver race starts at 30.01 min in. My airplane was #8 Heatstroke, I got real lucky in 17.......

Riggerrob said:
Several other groups have proposed similar “single-engined Skyvans” but none have flown as prototypes. I guess there is just not enough light-weight, odd-shaped cargo.
Click to expand...

I think the problem lies in the fact that they are outside the sweet spot for investors. The smaller airframes don't see as much financial scrutiny (bigger dream factor), and don't offer the returns of larger airframes. You are not going to see much change out of 50 to 100 million (20 to design and certify, 20 to bring to production, 10 for marketing / support etc if it all goes well), that requires a lot of airframes.