Where is the CG when fully loaded? Is there passengers behind the wing or all in front?

Will the production model have windows in the cabin, bigger windshield for a better forward view for the pilot, an emergency escape hatch, baggage door and removable access panels and still achieve low drag?

Byron, why aren't A/C and cupholders at the top of your want list?
Keeping laminar flow over holes could indeed be a headache. For hatches, suction may be needed.

BJC said:
Will the production model have windows in the cabin, bigger windshield for a better forward view for the pilot, an emergency escape hatch, baggage door and removable access panels... ?
Click to expand...

No. Those insufferable and time-consuming annoyances interfere with laminar funding.

jandetlefsen said:
Some people have doubts that the claims of the performance is real or that it is an elaborate scam to get investors money....Also they have a flying prototype that they claim has confirmed their calculations. I think they are past the point where they could BS.
Click to expand...

This airplane's performance claims are even more physically impossible than Raptor's.

The idea behind this contraption is to supposedly fly at 60,000 ft, where there is very little air resistance, and so flying fast on little power is possible. But, there is no way that this airplane could ever hope to go that high. Its wing is way too small and so is its propeller.

This contraption has a wing that looks to be about 100, maybe 150 ft^2 tops, and a tiny prop of typical seven foot diameter. There is no chance on earth this thing will ever reach that high, and if one were to simply calculate the coefficient of lift required for that small a wing at that height and speed it would be clear that this is impossible. Same goes for the tiny prop, there is just not enough air up there.

So FL600 is out. That means their ridiculous performance claims are out also. It is very easy to check the numbers here. Let's say this thing could reach 40,000 ft. Let's also assume that its total drag area is about equal to that of a Cirrus SR22, which is about 5 square feet. This is highly unlikely considering the size of this this thing's cabin. 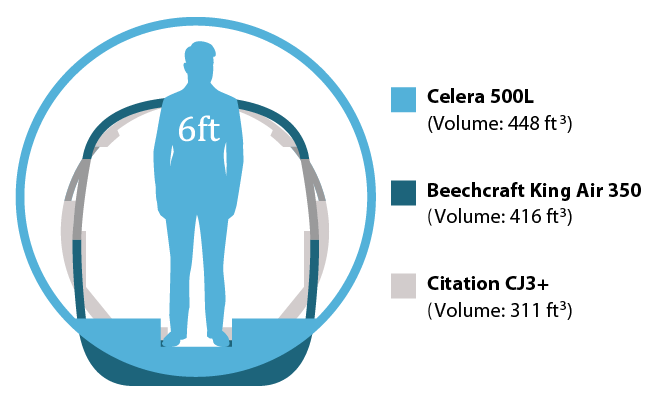 But let's just pretend it's the same drag as a Cirrus. At FL400 and their claimed speed of 400 KTAS, the dynamic pressure is 134 pounds per square foot. That's the air resistance the airplane needs to overcome. If we assume the 5 ft^2 of drag area, that means the airplane needs 670 pounds of thrust. That means it needs about 970 horsepower.

That single RED A03 turbodiesel is only capable of 500 hp max, 400 continuous, so even two of those engines would not be quite enough for this airplane to see 400 knots at FL400, even assuming it had a total drag no more than a tiny by comparison SR22.

That's how ridiculous this claim is. It is utterly impossible. Realistically, again assuming drag of no more than a Cirrus, it could maybe hit 300 knots at 40,000 ft. But it's drag is almost certainly not as low as a Cirrus. This thing has a stand up cabin of over 6 ft.

There is no way to fight basic physics. A widebody triple seven has four times the drag of a 737 because its cross section area is roughly four times bigger. These claims of 'laminar' flow are meaningless if you are trying to push a six foot wide barrel through the air.

But again, giving them all the possible credit and stretching credulity to the max and assuming this thing has the drag of a Cirrus, we find that it cannot perform even on a par with a TBM.

Climbing to 40,000 feet with a prop is ridiculous. It takes a Citation 30 minutes to climb to FL400 on a good day. Realistically, one could come up with an airplane like this concept that would target the turboprop flight levels, ie the 20s and low 30s. Here the turbocharged diesel would have some small incremental advantage, but not that much. A TBM will see SFC of about 0.5 while cruising at 30,000. The diesel in this thing has an SFC of 0.35. not that big of a difference.

But the turboprop is going to climb a heck of a lot quicker and reach its cruise altitude more quickly.

This idea that the Celera people have come up with is a lost cause. Turbomachinery is getting more efficient all the time and we could soon see turboprops in this size range getting SFC of about 0.4. The very big turboprops are already there. The 15,000 hp monsters on the Tu95 have cruise SFC of under 0.4, right there with a diesel.

Plus the turboprops have a much greater power density, while diesels are very heavy, plus need the equivalent of a small turboprop engine just to act as its turbocharger for high altitude work.

It's a goofy concept with zero chance of real world success, and goes against the grain of the industry direction. Somehow this guy, who perhaps has his own money, or has convinced some completely aeronautically ignorant investors to go along.

Evaluating new configuration ideas is done all the time at a very serious level in industry. Ideas that are promising are usually published in peer review journals, but most never see the light of day because radical new departures come with a huge amount of work and cost and really don't deliver enough benefit to be worthwhile.

In this case, any competent industry pro that is conversant in preliminary configuration studies would need help getting off the floor from laughter.

I still haven't seen a credible video. Ya know, like real sound and someone in the cockpit. Like a Raptor video.
K

Critical mach and other things come into play, but the I believe the Celera is substantially faster than the Grob, meaning it doesn't need as much wing to fly high.

That said, 60k' is impractical for a bunch of reasons.

Impossible Cl?
The Celera has a claimed stall speed of 70kts (or is it mph?) down low. At 60k, that would be 230kts. Maybe they are a little out. But considering the work gone into this thing I have a strong suspicion that it's your guesses to weight and wing area that are amiss. Stall speed is really not hard to get in the ballpark. Do you really think a project of this magnitude is out by over 2x? Even Peter did way, way better than that.
At 50k, 400ktas and 5sqft drag, it would need around 700hp. At 60k, 400hp. The numbers aren't that far out, with your wild guess at drag area.
I am having trouble finding many hard-ish numbers for the Celera. If you could point at something that isn't a website article, I could look at them.

There is a term that I need to remember.

Kind of wish they'd turn on adsb so we had some data...

BJC said:
There is a term that I need to remember.

And a lonnnnnnng jacket!
T

Well past the point they could BS, even when literally everyone who knew a bit about blood assays was saying, "nope".

And all the professional investors with "deep industrial knowledge" who could shuffle money to mitigate risk.

It's a circle of argument from authority, an echo chamber.

They may we'll have something that will knock my socks off. I hope they do...

I get excited about data, real data, and my excitement, attention, and education can be directed towards plenty of other neeto things.

On another tack, their patents simply scream, "we just did this to say we had patents, and please don't bring up the prior art...we really lucked out to get them granted."

You will see these patents dripping from Molt Taylor's work, and are otherwise obscure and uninteresting. Even the fluidic control mixer is already in use exactly as depicted already since the 80's. The flap actuation almost singularly appears to be the lone novel area. The cooling block is describing and claiming advantage to every cabin and induction intercooler ever made. The entire body of patents is tailor made to check the boxes for "professional investors with deep industrial knowledge.

Data first, and if it pans out, I hope they are the Musk of the skies. Would be nice.

Even if it never meets the performance goals, it may still make a comfortable cabin class cruiser with good fuel economy.

BoKu said:
And a lonnnnnnng jacket!
Click to expand...

Nice, I see what you did there.

Admittedly i don't know much about them but did they ever have a working prototype that could have been scrutinised before investing?

Having tangential or distantly relevant Patents will be the new "renderware" and the new "clown puke" CAD graphics, upon which a company can burst onto the scene with investment options. The phrase "proprietary algorithm" has now been pimped and wore out like a crack-ho for quite a while now, and "Innovation Patents" just sounds cool, like it could be legit. If one more new invention uses the term "disruptive" I think we're going to have rioting in the streets...
I

BBerson said:
I still haven't seen a credible video. Ya know, like real sound and someone in the cockpit. Like a Raptor video.
Click to expand...

No sound, but here's the teaser video.

This could be a successful aircraft if it manages 300+ mph at gross in the 20k's. I don't understand why that's not enough. Perhaps someone else has more perspective. Why go after extreme claims?

A 182 at 145 mph is just as fast as an airliner in total trip time from my home to a destination 600 mi away compared to flying commercially. Anything shorter is faster to fly the Cessna. The RV-7 is faster out to 900 or 1000 miles. Driving to commercial airport, parking, security, waiting, flying, baggage collection, car rental, etc., versus flying from my small airport down the road, landing at the small airport close to my destination, etc.

Costs are more important deciders on any given regional trip than airspeed. Their claims of speed are interesting, and absurd without explanation and demonstration, and less relevant to practical time concerns for regional trips. And if they need $356 an hour at 300 mph, it is still the same cost fully utilized (flying a lot, probably shared) as the 182 is flown 100-150 hours a year or 1.3 times more expensive as the RV-7 flown the same distances.

So it may have a future at the right price and even a reasonable performance as the shiny new thing. No need to make stuff up or to be coy.

They could generate a lot more actual interest by actually publishing the real numbers instead of being as vague as failed investment traps in the past.

jandetlefsen said:
Some people have doubts that the claims of the performance is real or that it is an elaborate scam to get investors money. But they are dealing with professional investors, likely with deep industry knowledge. If you invest big money you can buy the expertise to mitigate the risk. Also they have a flying prototype that they claim has confirmed their calculations. I think they are past the point where they could BS. Of course there is still a lot of risk in the certification process, lot of companies have gone bust trying the same. This always seem to take longer than anticipated.
Point is they are not fundraising from naive retail "investors" through preorders that don't have the skills to do due diligence on such a project and might fall for lofty promises.
Click to expand...