Right - Lyc has the carb bolted on the bottom of the hot oil sump and the intake tubes going through the oil sump. The small Cont does not have that.
I have had carb ice one time with a Lyc and the conditions was perfect for carb ice. Many times with small Cont.

This setup has the most effect at low throttle settings. The exhaust side of the copper pipe will be at a much higher pressure than the carby side. The pressure in the carby is also not constant, but pulsing. The exhaust gasses will blow some distance into the carby throat and release their heat there.
T

As long as you are not close to detonation, not living in a sandy dusty place, and don’t need the extra horsepower, it’s not hurting the engine to keep it on. Bad form. Bad form can lead to the others becoming problems.

Mooney C models are bad about carb icing. Maybe because they get pushed into the conditions more than others. They fly with it on most of the time. That’s why E models are preferred for IFR at that budget range.
Lycomings don’t seem to care about heat operation. Continentals carbs get more of a temperature change. Some people pull the heat every once in a while to check and clear. Not just in the pattern.

IF you are flying over a power plant that has the large cooling towers. Expect carb ice. I have got carb ice over the same power plant at 9k feet above the towers two different times. Any time the clouds are starting to form at your altitude.

Dana said:
Not immune, but enough less likely, I gather, with the intake going through the warm sump, that they don't recommend carb heat as a usual thing, but as a response to any unexplained drop in rpm or manifold pressure.
Click to expand...

True. I worked on them for years, and flew them, and still had ice in flight on really nice days. One tends to underestimate the power of that little freezer we call a carburetor, and the weight of air going through it. The OEM carb heat designs usually get some serious heat off the exhaust manifold, and remember that the manifold or risers can be red-hot in climb or cruise. Not like a car's exhaust at all. High power levels do that. There have been carb ice accidents, though, during long glides such as practice forced approaches, when the carb iced up because the exhaust system got so cool that it didn't deliver enough heat to keep the ice out. We had a policy that the engine be brought up to a low cruise for ten seconds or so every 1000 feet on the descent to gt the heat up and clear any accumulating ice. Ten seconds is a LONG time, and a short blast won't fix anything. There were some instances when this wasn't done and the engine was reluctant to go back to work for the overshoot.

Cessna calls for carb heat anytime the throttle is reduced to descend or land. Piper doesn't.

I like the valley engineering setup with the exhaust bleed but im not sure how to best adapt it to my 2 barrel carb? It seems like if i used 1 tube to each of the butterflies then below 3/4 throttle the closed butterfly on the 2nd barrel will be causing enough intake vacuum to pull excessive exhaust gas in and cause a very rich mixture.

At the same time its a top mount downdraft carb wuth the air cleaner directly on top, this would require any intake box setup to be quite large and mounted completely outside the cowl.

Does anyone know of any electric carb heat setups? 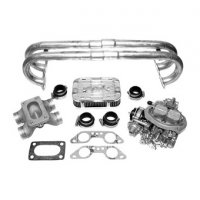 This is what im working with for a carb setup.

cpd said:
Does anyone know of any electric carb heat setups?
Click to expand...

I looked at that once, it would take a lot of power to achieve the required temperature rise. That said, there is an electric carb heat available for the Bing carbs used on Rotax engines, but that heats the carb body itself, not the incoming air. I don't think that would work so well with a butterfly carb.

Why not just build an aluminum heat box to fit around the air filter and a simple muff around the exhaust? This sort of thing has been common for almost a century, just dig around for examples to follow. Here's a good one from the late R.S. "Bob" (no, not that Bob) Hoover: http://bobhooversblog.blogspot.com/2007/05/av-carb-heat-box.html.

For the heat muff, you are just talking about some stainless steel sheet wrapped around and hose-clamped to the tube with a pre-made flange to bolt on a 2" duct hose, the simplest ones I've seen were just sheet folded into a square or hexagonal cross section tube with the ends bent down Z-fashion to make tabs for the hose claps to hold to the pipe, cut the tabs narrow enough for air to pass between them.
Last edited: Jan 12, 2020
T

I would build an air box with flapper door and a heat muff.
M

The Yamaha RX-1 snowmobile engine has electrically heated carbs. They are liquid cooled engines and the carbs also have coolant heating. I don't know but it seems like the electric heat would be turned off once the coolant has warmed up.

I would use the airbox setup but its not practical the way my airplane was built. Its a top mount carb with the carb body itself sitting in a molded protrusion in the cowl, And the air filter protruding out the top. An air box would be completely exposed to the cold air outside and require at least a 3ft cat tube run to reach it, again with the scat tube exposed to the slipstream. It seems like doing this would result in an unsitely box protruding from the cowl and because of the large size of the box and long scat tube run to reach it the incomming air would be easily cooled before reaching the venturi.

There is no easy solution. It really comes down to fly as is or surgery. Personally I would be putting something like duel Bing carbs with no heat or modifying intake tubes to lower the height or remote carb and add heat. If it has plenty of horsepower, you could make it suck hot air all the time and not deal with a door setup. It’s not going to be work.

TFF, if i put a sealed box around the air filter id still be worried about the intake are cooling off along the 3ft+ scat tube run from an exhaust shroud.

Im starting to think that the only real solution is to get a new carb setup and mount it below the engine which would require relicating the oil cooler and oil filter somewhere else.

At the same time its got 164.8hrs on the clock so maybe im making a mountain out of a mole hill?

Why not try the exhaust bleed tube solution before you redo the whole engine? You could rig up something temporary with a valve to turn it on and off to see if you get a noticable RPM drop.
T

Lots of planes have pretty good runs of scat hose. Air is moving pretty fast so if it’s pulling hot air, it’s in the engine immediately.

Diverting the exhaust has some merit, but it’s like trying to put 1970s emissions equipment on the engine. Just about all options reduces performance other than the standard way. Carb heat is one of those things that once you get it, you want to get rid of it. Every minute it will get worse unless you clear it.

The more you push the conditions, the more you will want it. You can select days that give you pretty good odds, but you will have to give up the good days that those odds are present. It’s always a balance.

Can't remember where I saw it but some have used copper tubing to circulate hot engine oil around the body of the carburetor.
T

Theodore959 said:
I have a question... (i have not read entire script here)
Does fuel injection eliminate the icing issue? or icing at throttle body same?
I liked the oil cooling method, coil/wrap aluminum/copper tubing close to carb/intake.
Click to expand...

Aircraft-type fuel injection reduces the icing risk to a low level. It can still happen, though, and since alternate air is mandatory on certified airplanes, the injection system's alternate air is taken from inside the lower cowl where it's warm.

Fuel is injected into the intake port right next to the intake valve. That removes the evaporation-cooling that causes carb icing around the throttle butterfly. The throttle body has only a small venturi in the RSA injection systems, and none in the TCM, so the pressure drop cooling isn't very strong either. The RSA's venturi is to generate a small vacuum signal that controls part of the fuel regulating mechanism. Other inputs are impact air (dynamic pressure), and umetered and metered fuel pressures.