The skins are part of the structure, increasing the rigidity of the wing cell. My intent was to signify that the Air Tractor wing is a well-designed, and well-built structure, that STILL twists when the ailerons are deflected in a turn.

challenger_II said:
Regarding the structure you posted, the diagonal wire bracing is for drag/anti-drag, and does nothing for preventing the wing cell twisting in the vertical plane, i.e: chord-wise.
Click to expand...

And if you over tighten the diagonal wires, the wing will snap to a shape with compression ribs alternating between nose up and nose down as you go along the wing. Not making this up, folks have applied too much torque to the system and "pop" the wing.
C

Is why I prefer tubular drag/anti-drag members... May take a weight penalty, but OH! So much easier!
T

Really? Sienfeld couldn’t say it strong enough. Why show the flying wires when you ask what’s inside? If you don’t have a skin or geodesic straps, you don’t get torsional control. Internal Starduster picture. 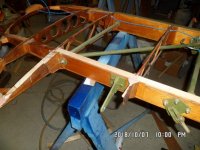 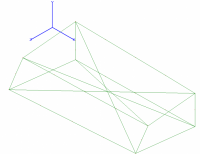 In my experience calculating deflections reliably are complicated except in very simple cases. Your two practical options are FEA or testing a scale model. The former generally is not recommended for amateurs but the latter may often be a good choice.
Last edited: Nov 23, 2021
T

Prop’s thread on testing is brilliant. He knows how to do that. He found out though that cutting everything close is hard to do.

TFF said:
Prop’s thread on testing is brilliant. He knows how to do that. He found out though that cutting everything close is hard to do.
Click to expand...

wsimpso1 said:
put in a small twist
Click to expand...

for wing at limit .....the loads are pretty straight forward....a tilt of 15 Degree is recommended for a load of 25% in the forward direction......one could also measure twist at max aileron load of 9 PSF for my speed. ....but it is going to twist no matter what and how much is too much seems to be my problem.....


wsimpso1 said:
The torque divided by the twist is torsional stiffness
Click to expand...


have I missed this spec. somewhere in all the design guides (part 23, Glider Criteria, etc.)

edit: apparently not .....at least with this search

challenger_II said:
Well, you know when you are one the edge when you give right aileron, and the plane rolls left...
Click to expand...

BoKu said:
I could grab the tip and crank in a couple degrees of washout or wash-in with relatively little effort,
Click to expand...

I distinctly remember large opposite aileron deflection required to maintain the bank in the 1-26.....is this what you are talking about and is it normal in other gliders?
Last edited: Nov 23, 2021

proppastie said:
have I missed this spec. somewhere in all the design guides (part 23, Glider Criteria, etc.)
Click to expand...

Spec for torsional stiffness? Not usually specified directly. There are several things to be taken into account:

First piece is the wing needs to have a factor of safety of 1.5 (for wood and metal and metal cables) or 2.0 (for synthetics like Dyneema) while under limit loads which includes carrying pitching moment as well as shear and bending moment. With a structural wing skin, this is usually no big deal - the a structural wing skin that is robust to build and will not cripple contributes mightily to torsional strength. In a fabric covered wing, we usually have a pair of lift struts plus root fittings that are usually more than strong enough once they will not buckle under limit negative g;

Second piece is adequate wing stiffness in torsion to avoid aileron reversal due to wing twist and then to give good aileron response. Work the aileron loads into the wing and show that in total the wing's deformation is small enough to get rolling moments in the right direction and of adequate rate to fly the bird comfortably.

Third piece is the wing needs to have enough stiffness-to-mass ratio to not flutter in any of the full wing modes with bending and torsion usually being the critical modes - 1st bending mode is tip flapping up and down, 2nd bending mode is tip up and midspan down, then reversing, 1st torsion is tip rotating leading edge above and below the rest angle, 2nd torsion mode is tip rotating one way, mid span rotating the other way. Generally, if you get the first couple modes above your Vdive, the rest are ay high and of no big worry, unless one is an integer multiple or integer fraction of some other input. These must all be precluded within the the intended flight envelope. Vdive is what we are protecting for. Preventing these modes takes high enough stiffness to mass ratio in each of bending and torsional modes. Then if either mode lands on its resonance with another mode, things can get really interesting. Usually with structural skins or two lift struts in our little airplanes, this is not much of an issue. Go with a soft wing structure that you are beefing up until just adequate in torsion, and it can design your systems.

This second and third ones are why the faster an airplane is, the stouter its wings and tailplanes tend to be. The higher your Vdive, the stiffer everything has to be to drive flutter above Vdive.

Now flutter prevention is a requirement. The faster your Vdive, the more you have to learn about prediction of stiffnesses and vibe modes. FEA with an Eigen solver is really helpful here as it will predict the frequencies of as many modes as you want, and is usually pretty accurate at it. As to minimum frequency you need to protect up to, well, you have a bunch of learning on flutter ahead. Have fun.

I believe the old FAA glider standard does give a stiffness criteria that relates the twist/deflection to 200/Vd^2.

ragflyer said:
I believe the old FAA glider standard does give a stiffness criteria that relates the twist/deflection to 200/Vd^2.
Click to expand...

Right. FAA Basic Glider Criteria page 79.
How would this torsion criteria, in general, compare with the comment from Boku in post 16 or other ultralight gliders?

When I do the calculation for 61mph Vd...I get .053 which I am going to have to figure what that means exactly.
R

proppastie said:
When I do the calculation for 61mph Vd...I get .053 which I am going to have to figure what that means exactly.
Click to expand...

The glider manual explains this. You apply a torque (any reasonable amount that results in measurable twist) close to the tip of the wing. You then measure the unit twist (radians per ft lbs) at multiple points (say 4 points) across the span where the ailerons are. Unit twist is the twist you measure in radians divided by the torque you applied. You then plot a curve - x axis is aileron span and y axis is UnitTwist*chord^2. You then measure the area under this curve. If that area is less than 0.053 you meet the criteria. Usually for 61mph Vd airplanes, assuming conventional structures, you should have no problem with flutter, but with as with all things flutter you can never be sure.

I suspect one of the most efficient and amateur-accessible ways to make a cantilever, internally-braced, fabric-covered wing is the geodetic approach used in the Vickers Wellesley and Wellington bombers and also the simpler wooden Thalman/Yates/Greenwood etc. series of homebuilts. 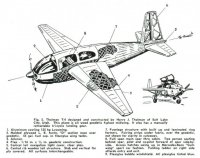 Ok, so I might have gone down a rabbit hole after getting inspired by Pop's JMR special, and Fritz's rear fuselage on his Ranger. Here are some resources I found about Geodetic Design. It's gotten me thinking about slow, light airplanes like ultralights, or reworking the fuselage on a Ragwing...

In the tradition of the 21st century Volksplane thread, I have been kicking around a concept for a wood geodetic light aircraft in the same weight class as the Evans VP-2, so about 1050 lb gross weight, but with far better performance thanks to lighter construction and cleaner design. The...

ragflyer said:
Usually for 61mph Vd airplanes, assuming conventional structures, you should have no problem with flutter,
Click to expand...

I had not been concerning myself with flutter for that very reason......