Can we have too much stability?

I get to asked a lot about what I am doing with my airplane and why by non-pilot guys. I am using this picture below to explain to them that my airplane is unstable. I am telling them that it is sort of like driving on top of the pipe versus inside of the pipe. So, I am using situation with directional stability. Aerobatic airplane would be like driving on level table. So sometimes I get to ask about situation where you would be driving inside of round tunnel with pretty small diameter. Would be almost impossible to turn your steering wheel. It would be too stable.

Question for you guys, do we know examples of airplanes that build this way. Maybe by mistake. Where would be almost hard to fly. Simply too stable. 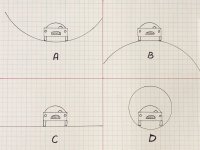 Eugene said:
So, I am using situation with directional stability.
Click to expand...

Directional stability and roll stability are two different things and it's not clear what you are talking about.

BBerson said:
Directional stability and roll stability are two different things and it's not clear what you are talking about.
Click to expand...

In conversation with non-pilot and using driving experience you can only use directional stability.

But for pilots it's understandable that we have directional, pitch, and the roll stability. Simply wondering if there is airplanes out there with very heavy controls. Roll or directional. Airplanes that will fly you instead of you flying them

Usually heavy airplanes without boost have heavy controls, nothing to do with stability.
Stability and control are not the same and sort of opposite. Here is some comments: What are the relations between stability, controllability and maneuverability?

BBerson said:
Usually heavy airplanes without boost have heavy controls, nothing to do with stability.
Stability and control are not the same and sort of opposite. Here is some comments: What are the relations between stability, controllability and maneuverability?
Click to expand...

Thank you, this answers many questions.

Going back to my airplane however, we have determined that horizontal tail simply too small with Vh 0.34 and engine positioned on top of the roof. And looks like it is relatively common mistake. I have read statements many times that it is very hard to create tail that's too big, and very easy to build tail that is too small.

Do we know an airplane with horizontal tail that is too big?

Probably the Heinkel He 112.
T

Planes like Pou’s and Sky Pups verge on too stable because they eliminate one form of control and have to compensate for its loss. It’s part of what the designer wanted.

Did you read this from last week? Heavily inspired ultralight

Thank you all. I learn my lesson. I know now that driving is really different than flying. And they are not comparable. And any attempt to do so will result in failure.

And big tail is my friend

Dutch roll is the result of too much spiral stability ie too much dihedral or not enough vertical fin.

Zenith 601HD. It feels like a Piper Archer. It goes around in turns like it's on rails. Properly trimmed on the approach, it descends the glideslope like an airliner. I flew one with hingeless ailerons and compared to another with hinged ailerons, it flew like it was set in concrete.

Twodeaddogs said:
Zenith 601HD. It feels like a Piper Archer. It goes around in turns like it's on rails. Properly trimmed on the approach, it descends the glideslope like an airliner. I flew one with hingeless ailerons and compared to another with hinged ailerons, it flew like it was set in concrete.
Click to expand...

I heard guys with years of experience talking about airplanes like Cessna 172. Something like "yeah it's a good airplane but nothing excited about it". So, Zenith 601HD and Piper Archer must be those kinds of airplanes, not exciting ones.

I got pretty excited in my Skyboy couple times. Is that means that I have exciting airplane? What kind of excitement we are looking for?

I was trained in Cessna 172 and when I was all done I was thinking that every airplane is flying the same way. I was wrong of course. 45 minutes in RV 9A actually got me sick. Too much sun into my eyes, too hot was that day and felt like during the flight airplane was constantly wiggling tail side to side in comparison to Cessna.

Can I get example of exciting airplane? And which part is exciting about it?

For an aircraft as small and light as a 601 HD to feel like a much bigger and heavier Archer means, to me, that it's overly stable. I have flown Archers for IFR training and they are ideal for that, because of their stability. Even a 172 isnt as stable as an Archer, especially for IFR work.

Eugene said:
Can I get example of exciting airplane? And which part is exciting about it?

The best example of an “exciting” airplane is one that suddenly gets unusually quiet. It has nothing to do with stability. It has more to do with how much fuel is in the tanks.*

Too big of tail does not make the plane “too stable” unless the decalage is to great between the two surfaces.

Your plane has too little tail volume and therefore requires excessive incidence differential between the wing and horizontal stabilizer creating high trim drag.

In the evolution of hang glider (and trike) development some designers went overboard on pitch stability to provide a large safety margin for avoiding the “luff dive”. Flying one of those in gusts and thermals was “exciting”.

When you hit a gust or thermal the aircraft would pitch up to maintain the trim AoA and maximum pull in on the control bar would not stop the climb and extreme pitch up. Then the gust and/or thermal would pass and you would be sitting there in an extreme nose up attitude with little or no airspeed and a push out to near stall would be necessary to limit the sink and avoid an unintended touchdown shortly after takeoff.

An aircraft with less pitch stability will bore thru the thermals and gusts with little or no pitch change.

*There is a classic example of the exception to this rule. Scott Crossfield was known to point out how exciting it was to fly the X-15 and how when the fuel was finally gone the exciting part was, hopefully, mostly over.
Last edited: May 6, 2021
T

Exciting is about mastery not easy or scary.

An equestrian can race a thoroughbred, cut cattle, ride a jumper. That would be considered exciting to a horse lover. To the casual person, riding a nag on a city park riding trail may be exciting. There is levels in between.

An RV9 was too exciting for your experience. There are others it’s a yawn fest just like a 172. Most of it is about how far you want to master it all. Some people find it exciting to force a 172 to do things at its max ability and some just want to ride around. Some want more performance and some want less.

Eugene said:
Can I get example of exciting airplane? And which part is exciting about it?
Click to expand...

In the roll axis you can have too much stability - roll axis is different from pitch and yaw. We humans like roll to start and stop on command, to precisely set and keep a bank angle, etc. Those require enough control authority. Since roll rates in most planes are kind of slow (compared to pitch and yaw) we pilots can keep up with an airplane that is even modestly unstable in roll, and most of us are fine with that in visual conditions, so even modestly unstable birds in roll can be tolerated.

Free flight models before RC had compound dihedral because they had to have it or they would upset and crash. For an airplane with ailerons and rudder, you want only a little roll axis stability or the airplane becomes unpleasant and imprecise to fly. For an airplane with a rudder but without ailerons, you want some dihedral effect so you can roll the airplane for turns. The Decathlon will do rolls with rudder alone by just pushing down a rudder and holding it.

In pitch and yaw? Enough stability and damping are usually our goals. The nose stays where you put it, and when you put in a change in elevator or rudder, nose moves and settles down quickly. No oscillation on new setting (dead beat response) is nice, but most of us do just fine with a little oscillation as long as it settles in a second or two. You get pitch and yaw stability from CG ahead of neutral point - static margin. Neutral point is moved aft with more tail volume, so that can increase stability. You get damping in the axes with tail volume times tail arm again (tail volume is tail area times tail arm, and damping is tail area times tail arm squared) so increased tail volume tends to also increase damping.

If you have a lot of tail volume coefficient (tail volume corrected for wing area and characteristic length) and a lot of the tail is control surface, you can get plenty of control. Too much stability? That would have to come from too much static margin for the amount of control power you have. Small elevator and a lot of static margin makes an airplane that does not want to change pitch.

Talk to a professor (or the folks who listen to them) of stability and control, and they will tell you that the true measure of enough control is can you fly the entire envelope with safe maneuvering margins. And then they go off and model the airplane moments about the axes and controls to find the differentials in the axes, blah, blah, blah. If you run out of control before you get to the edges it might be because you have too small a control surface with too short an arm or because you have a too much static margin. They feed together.

The biggest reason I know of to not make the tail too big is to minimize drag. Scoot the tail further aft and you need less tail area to get the same tail volume, with increased damping to boot. Increase tail aspect ratio for a little less drag, a little more tail response, and moves the neutral point a little more aft too.

So you are back to the complex interplay of static margin, tail volume, and control adequacy.

In our little airplanes, it is hard to imagine taking an existing airplane that can fly its entire envelope, then enlarge the tail, and have it fly worse unless you made the control surfaces really tiny. Burt Rutan and Steve Wittman both made airplanes with small rudders that flew great. And Burt also made airplanes with modest elevators that flew great. OK, these were not aerobats these guys designed, so that does come down to what you want from the airplane. But both of these fantastic airplane designers made sure the tailplanes were big enough.