Building from scratch a dream

In the photo above the adhesive scar can be seen on the tail. from the round float.
Another failure, that I have no photo evidence of. Is an attempt at making the whole rear float system rotate . This was to attempt better taxi maneuver. Waste of time and glad it never worked out. It worked like out board boat steering. Since this was on a horizontal pulley with a vertical axis the cable would fall off and wedge . I got in a real fix the first time on the water.

Making up the control for the flaperons . I had them installed and working but opted out .A suggestion made to me, that they where not needed on an UL.

When one takes on a scratch build there is much that is unknown. Since I know far less than many in here about design engineering . The fact that I still built a flying success without getting killed is a mystery .

There was many suggestions along the way. All were appreciated whether I headed them or not. Before it flew the suggestions that all my failure to fly problems, were because I had those rear floats and a step was required for rotations etc. That was never the problem. It turns out to be a combination or rotation authority and the fixed angle attack presentation.
In 2012, I solved part of that by spacing under the leading edge.
First flight was achieved, and test flying began . A slight head wind was very useful to get airborne . With clam condition more desired, this was a sore spot. So even though practice flying and videos were made during 2012 an 13 . I fought the idea of tall spacers under the wing and went search for solutions
The step, well everyone said it was needed, so I tried this. 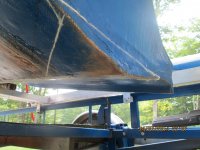 This is the bottom aft, before cutting. That curve downward was going to prove absolutely critical to even getting up on plane. Cut away and made like a small step. it became a boat plowing water and dragging everywhere. Solution put something back 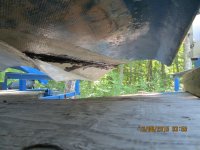 I was replacing my mobile home at the same time with a new house, so a few test is all that got done. This was a very good solution . But 2 years would pass before I got to find the real culprit . That turned out to be insufficient elevator travel . After changing the push rod end. Problem solved, lift off in any condition . I just tried to beat the time power to lift off. When I returned home last year ,I weighed the plane at a scrap yard scale, Put and take away method. It was looking like and flying like, but it was not a 103 any more.
So I had to do some things over. Here is a few static showing why those rear floats are needed and have to be .If I solved it with a longer hull and step I would loose the overall allowance of 30 + 10 +10 and only get a much heavier hull and the same something for lateral. 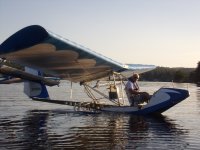 With the old hull and pilot the rear floats have 2 inch top added over the original wedge. This was adequate but was now far to heavy. Along with the main at now 60 lbs what was once only 40.
The last solution not good. 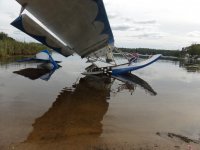 Not pretty even with pilot its not great. Though it flew only once successfully on this same day the second takeoff resulted in a crash. I loved the on plane / step, highly maneuverable jet ski behavior of the new hull. 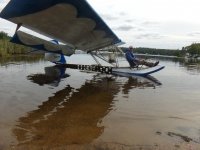 That crash has resulted in a promise to my new lady and my sons not to fly .
Though I still have a bug to build who knows whats next. I have to tinker.
I have some New ideas for a much smaller stronger Mono spar that could have amazing potential. I will share as I go . I can not begin till late mid June.