seriously? is this the way you work on your airplane as well? rigging up all sorts of dodgy fixes, clearly demonstrating a lack of understanding of the physics and forces involved?

Mounting it would take less than an hour, and you have a safe towing platform. Instead you spend all sorts of time shade tree "engineering" a horrible solution that is clearly dangerous!

good luck with that!

Chopsy's trailer is all I'd want to pull with a stock S10 bumper hitch. But without the mod. I've ripped 2 factory hitches off vehicles, so I'm more cautious now... My welded replacements have never broken, despite heavier loads.

Can't you guys just suggest alternatives without adding derogatory insults? And give credit for restoring an old trailer as a first step to flying someday?

It's a wonderful trailer hitch. Everything will be fine. 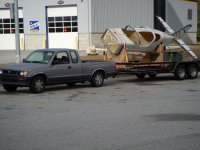 Whatever. I'm going to space.

Personally I would have swapped the what 12" tires for some 15s and had it run level as a starting point.

I don't understand why it didn't work, it's a flat plate and 4 holes.

This thread has been inspirational. I bought a new 5th wheel but don't have a hitch so I had to do some budget engineering to make it work:

That doesn't look balanced. I would get a proper 5th wheel and bolt it on the hood with grade 8 bolts. Then drive backwards like some locomotive engines do.
C

Can't you guys just suggest alternatives without adding derogatory insults? And give credit for restoring an old trailer as a first step to flying someday?
Click to expand...

Hence the link to the reciever hitch engineered for her truck! again - 60 bucks and an hour of work! People here with experience and knowledge try and help her out, and some of you think thats being mean.
so I guess trying to keep her safe, and save time and money are mean things to do!

The link was helpful. But why add premature insult with the link?
Your solution might be optimal. But she needs to get the suggestion before a decision can happen. 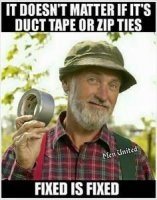 What are you guys talking about? When the hitch does come apart on the highway and wrecks everything it will be an excellent example of how the bourgeoisie keep us poors from flying. See, you have to plan your blog posts ahead like this... Now I have to unload all these goodies lickity split, and stuff it into the shop to work on at night, and get back to my $5.15/hr part time summer temp job.

Maybe rebuild the 503 first on the weekends? Like my dad says, if you ain't got an engine, you don't have a plane.

I got a David built homebuilt reduction drive and really expensive looking 60" warp drive prop with it that isn't matched, but David said if you spin it fast enough maybe it will work.

Save up so I can buy some of that second rate thread imperfect aircraft spruce glider dacron...

Yes, little girl, you can sit in my plane and play with the buttons...
and you too, whoever you may be

In the Dollar General parking lot of a thousand Bumble Nowhere Small Towns in America..
Barnstorming is on again
It starts now
And it starts with me

p.s. Copilot Kitty aka Special Needs Kitty aka Stroke Kitty did not make it. He was standing up on his front two legs and doing so much better on the wet canned cat food and purring and meowing happy, then he just died 2 hours before I got home, my friend said. No idea, I don't think his back was broken, but we did the best we could.
Last edited: May 6, 2019

Little Scrapper said:
It's a wonderful trailer hitch. Everything will be fine.
Click to expand...

I had a friend ,that is a mechanical engineer,look that hitch over and he said.......... 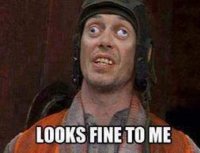 That light trailer is sweet.I restored a 50 year old steel travel trailer frame for airplane hauling.
Great satisfaction and honor in restoring old stuff. Some day an old Champ project might follow you home.
Restore it with some help from a local airport mechanic. Then find an instructor for lessons.
Someday take your dad for a ride. The first ever airplane (PB#227) covered in experimental boat vinyl... and it's in my front yard.

If this stuff works acceptably well as a substitute to painted dacron, it would change everything (for ultralights).

That dacron stuff and paint and $tits $uperflight is a big cost of an ultralight; I also don't need Death by MEK and all those other toxic chemicals or Oratex destroying my $500 retirement fund. Haha, that was an I wish wry joke just for me, there is no retirement fund at all.

Looking kind of ratty and rough because the first gen tape wasn't UV resistant and didn't hold, but who cares, I knew that when I signed up for it. We've found better tape and learned some new methods to work with the stuff and just about painting on plastics in general.

Where are you Lilienthal, Hargrave, Caley, Dumont, Curtis, Beachey, Post, Wheeler, Jensen, Culver, Chotia, Kolb, Holmes...?
Since those guys are no where to be found, I guess it's just me, the air, and Mother Nature. Mother Nature tells me, just try it! If I don't fly or it don't fly right, change it so it will, and try it again, and again, and again, until it does. That's what she did and she's #1 in my book top dog designer of all time.

Back to work in the flower shop tomorrow for a lousy $5 bucks an hour. Not even worth the drive.

I'll figure out which strut goes where when I get home using the following picture... Folding wing mechanism... this shot looks kinda like a helicopter swash plate to me Saving my posts from now on, before Topaz or Dana deletes them.
Last edited: May 27, 2019