You don’t have any old pictures of your Starduster?

Not the kind of closeup I want, and its wires weren't shiny and gleaming.

This problem had me vexed for decades. I love biplanes and I spend a big chunk of my spare time doodling up biplane designs and I have started several project that got sold or abandoned for life-reasons and one is still hanging under my rafters, half done.

The idea of using two smaller wires close together has merit. In older design books they recommend a 2/3 mismatch factor, i.e. each wire should be capable of carrying two thirds the design load, not just 50%. You could then go one step further and slip over a heat shrink tube and turn the two wires into a rounded edge thin plate. No idea what drag coefficient that gives but it ought to be better than round.

1x19 cable with swaged fittings makes a pretty neat installation. It lends itself to various terminal ideas, some very cheap. A regular AN fork terminal must be approaching $40 a piece these days. Turnbuckles on cables with thimbles are now ludicrously expensive, so I wouldn't even consider that.

Another notion that struck me was motorcycle spoke material. They are available up to about 1/4" diameter in carbon and stainless steels. However, despite looking forever for the answer, nobody will give me a yield and ultimate strength number. I do believe it is pretty high though it will obviously have to be tested. You could the use a simple U-fitting to hold the spoke nipples (dirt cheap and well proven) . I actually talked to a guy at Buchannon Spokes and they didn't scream when I mentioned Ultralight - They said "we're all gearheads here'! They would have to roll the threads on individually by hand because of the length of our wires, but totally doable. It would still all need testing and adapting to whatever fittings there are on the airplane but with a standard design U-fitting, it should adapt to almost anything. And it will have rolled threads! You could do the double wire with a heat shrunk tube thing because each wire is so comparatively cheap.

As a final solution: Maybe this could be a collaborative effort - one could come up with an extruded plastic strip, nicely streamlined. On the underside it would have a groove that accepts whatever stranded wire cable size we're dealing with. The groove would be shaped so that the cable would have to be snapped into it and held securely. That would require some experimentation, perhaps ideally suited to a 3d printer, where you could try many different cross sections until it works. Once the shape(s) have been determined you could get an extrusion die made and churn out miles of streamline wire fairings, dirt cheaply, And cause all Part 103's to suddenly go 20mph faster, but that is an other matter... I believe a custom die like that might be about $1000, last time I looked. But last time I looked (pre-covid) everything cost half as much...

Alternatively you could make the fairing in two symmetrical halves and glue them on, but then you can't inspect the wire. (Do we need to..?)
Last edited: Aug 9, 2022

I've mentioned this before, back in the 1970s there was a brief craze for "funny lines" in control line speed competition (think tiny model with a big engine doing 200 mph on 60' lines). In their final form, it was molded plastic fairings to enclose the [two] cables the models flew on, the speed gains were significant... before they were banned from competition.

I considered experimenting with something similar for my Hatz, but after running the numbers and seeing just how small a difference it makes at 80mph, it's just not worth it.
R

Sorry for the delay in sending these; it's been a busy week or two...
If you need some with a reference, like a ruler, etc, let me know.

rv7charlie said:
Sorry for the delay in sending these; it's been a busy week or two...
If you need some with a reference, like a ruler, etc, let me know.
Click to expand...

Those are perfect, thanks! Those are on a Travelair? What year? The attach points look just like the fittings on my Hatz, and are painted the same color, for a great comparison. Sent you a pm.
Last edited: Aug 15, 2022
R

Replied to your PM, but for everyone else, it's a 1928 Travelair 4000; one of the earliest built. Current owner has all the records back to its origin. He 'barnstorms' in it on a regular basis; he gave a ride in it this morning.

That’s waaaaay up my bucket list of things to fly. Color me green with envy.
R

I flew his other one, a '29 model, from the front seat for a few minutes years ago. Surprisingly nice handling airplane, and I'm not easy to please (too many years flying RVs).

Any link to pix of the whole plane? 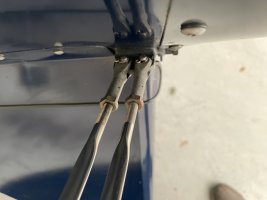 Dana said:
Any link to pix of the whole plane?
Click to expand...

Lots of pics of his other one (the '29 model) but not a lot yet of the '28; he's only had it a year or so. Bought it after running a couple of engines to TBO on the '29 and it got to the point of needing recover, and he wanted to keep flying. Here are links to his FB & Instagram pages. If you need better shots of the '28, PM me & I'll take some the next time he pushes it out of the hangar. You might be able to find some on youtube by watching the various videos of 'Slobovia Pumpkin Drop'.
Vintage Air Tours Instagram
Vintage Air Tours FB

What a clever way to build an ‘ignore’ list