I'm almost 4 years into a scratch-built Wag Aero 2+2. I joined here quite a while ago, but forgot I had.

Lately I found myself scanning threads on wing design and stress calculations and dimly recalled that I had seen this forum before. I typed in a user name and the password auto-filled. Heh.

Background: I've been a private pilot since 1981. Flying fell by the wayside until I got back into it 6 years ago. I had finished building a Pacific City Dory and fished a lot on the Snake River.

The super cubs flying overhead brought back floods of memories. After a few hours of instruction to knock the rust off, I was signed off in a rented Cessna 172 and back in the air regularly.

I also ended up acquiring a 1946 Commonwealth Skyranger which is in pretty good shape. I try to get out in her every week or two. 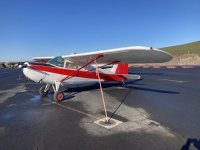 I'm also a lawyer. I've been a solo practitioner for decades, and the past 11 years I was partly a public defender. Trials and grind caused me to start my "Therapy Project." That's the Wag Aero. I ordered tubes, filled my oxy-acetylene bottles, and started in on it.

My goal was basically to have a side by side airplane that could go into the strips around here (Eastern Washington and Idaho), but still cruise a 300 mile trip without too much pain. My wife and I loved to fish and camp, so that was part of the picture.

Things derailed the past year. My wife, who had also been an attorney, started having cognition troubles. She was diagnosed with a rapid form of dementia. I've since closed up my practice and pretty much do caregiving 24/7. We still go fishing, but I can't leave her alone.

But, I'm still working on the airplane, albeit with more interruptions.

So far the fuselage is mostly done. I'm just locating and tacking in pulley mounts, tabs, and miscellaneous. One wing is 90 percent complete. (Wood wing). The empennage is complete. Landing gear, suspension, brakes, wheels, all done.

I still have to build the other wing and look for an engine.

Which led me back to this forum....When I built the first wing, I redesigned the flaps to be longer and have a somewhat bigger chord. I was sort of going for a semi-fowler effect like the Aviat Husky. Everything looked good until I started contemplating hanging them. The longer flaps moved the ailerons outward, which I thought was good. But I kept looking at that rear spruce spar and wondering if it could handle the loads.

The flaps on the Wag drawing are basically an after-thought. It was originally designed without them, so there are no details. They are pretty much the same dimensions as a super cub flap, which is kind of small for a "bush" plane.

Nobody wanted to give me any advice on a wooden wing, so I started studying and learning about stresses. This site has more information than most anywhere else except for the reference volumes (which I'm working through, too).

So I'm teetering between just going back to what was designed, or pressing on with calculations and stress testing. Either way, it is a fun journey. 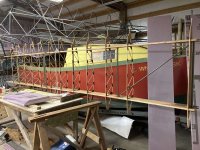 Welcome aboard! When you mentioned the Snake River I knew you had to be close to my in-laws (they're in Boise). Very beautiful place on that side of the country. I'm over here on the southern eastern seaboard where the humidity and skeeters thrive!

Daleandee said:
Welcome aboard! When you mentioned the Snake River I knew you had to be close to my in-laws (they're in Boise). Very beautiful place on that side of the country. I'm over here on the southern eastern seaboard where the humidity and skeeters thrive!
Click to expand...

Only a 5 hour drive away! (in good weather). Yes, I love it here. I'm originally from Montana and this is like that except for mild winters.

Thanks for that! I've looked many places, but never looked at the Interstate.
T

They were not small flaps 70 years ago. I would probably build them stock, but there are flaps like the Backcountry Cub has, that are pretty large along with different ailerons. Backcountry Super Cubs – The ultimate in STOL performace.

I know someone with a Commonwealth, it’s an interesting airplane.