Since I did a terrible job hijacking the "Honda K20C1 FK8 Auto-Engine Conversion" thread (guilty as charged) I thought I would start a more appropriately named thread specific to the Viking 110 engine issue.

This is an appeal by a non factory representative - a private individual to all Viking 110 owners to have your gearbox input flange dye penetrant inspected for cracking prior to further flight. The evidence presented below shows that whether you have the latest version of the input flange in compliance with Viking service bulletin or not, you are not safe. Both early flanges and later flanges have been shown to fail in a very similar manner at anywhere from 134 hours (claimed) to 800 hours on the early flange that used bolts and had no welding. Pilots had no warning that this failure was about to occur, and in both instances it occurred on climb out. If you find cracks, replacement parts of the same quality will be available from Viking. Until there is a design change, it may be neccersary to do an inspection every 150 hours, its just a little time and the cost of a new alignment bushing from Viking.

To clarify my position on the subject, I have not historically been the owner of any Viking engine, least not the Viking 110. However I have been a follower of the Viking engine story and also of the engine controller developed for the Viking 110 by Mark Hubelbank after many issues with the supplied Viking controller were not addressed. There was something in the order of 30-50 of the "708HU" controller built all for Viking 110's and they seem to have worked out real well. There is a forum dedicated to the subject HondaFit708huECU groups.io Group It has been quiet on that forum for quite a while (it got going in 2013 I believe) since no-one has had any squawks to raise and Viking is no longer making more of the engines. If fact there are very few spares even offered for the engine on the Viking store. I am a mechanical engineer working in the automotive field and have 15 patents and a pretty diverse range of experience since I also used to be a NDT technician and worked in refining, power generation, offshore oil platform construction etc before I began my automotive career.

In early May 2022 we had the first reported failure of the gearbox input coupling from Eric Miller. But the picture that he posted made it look as if only 1 segment of the giubo had parted. He had just taken off shortly before it occurred and was not able to make it back to the runway and ended up landing his Just Aircraft on an unmowed part of the airfield in long grass, his nose wheel got caught and folded under which then caused a prop strike and the aircraft finally flipping over. There is an NTSB investigator assigned to his "incident". Eric claims that the engine had 134 hours on the updated gearbox coupling at the time of failure. This is contested by Jan who said that the update had been made prior to Eric buying the engine and that the full tach time should count for his airplane. This would then be ~340 hours. Regardless, either number is a short time to failure for a coupling system that meets all the service bulletins posted by Viking.

In late October 2022, another member of the group, this time Mark Hubelbank himself, also had a gearbox coupling fail on take off. He was fortunately at a height that permitted a 180 degree turn and a landing back on the same runway used for take off, in the downwind direction. Mark saw that he had a hole punched through the side of his cowling where the broken off drive ear exited after tearing up the radiator and coolant hoses. Eric miller only discovered his cowling exit well into the NTSB investigation. 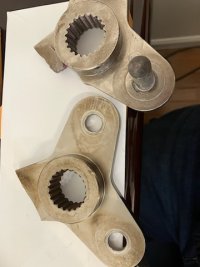 Here you can see side by side the 2 accident drive flanges. The flange with the welded pins is the latest version from Viking, in fact it is believed that this flange is also used on the 130, 150 and 195 engines. The one with welded pins is from the Eric Miller incident, supposedly 134 or 340 hours depending on who you believe. The flange with the holes for bolts is the earlier version from Mark Hubelbanks airplane N708HU. It was machined differently, has counterbores in the underside that reduce the nominally 1/4" web by 2mm or 1/3 of its cross section where the holes are. Yet this "non compliant" version went 800 hours before it failed. You can see the non compliant flange had just a single crack on the ear whereas the "approved" SB version has 2 cracks which is why it likely failed so soon.

I found a small crack in a second ear of each type, much smaller and shallower. This one from the Eric Miller flange. Note the crack tangent to the sharp corner where the boss was added on top of the flange. 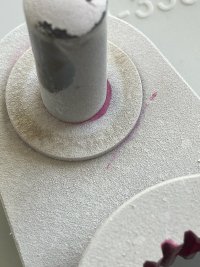 This one from the Hubelbank flange, the crack initiating tangent to the OD of the bushing inside the giubo. 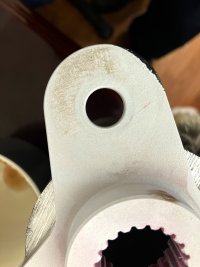 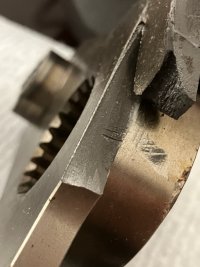 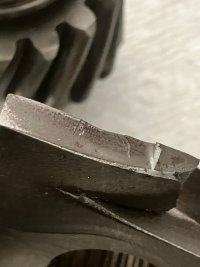 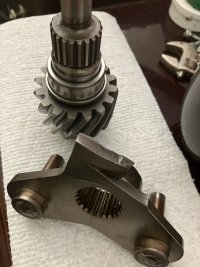 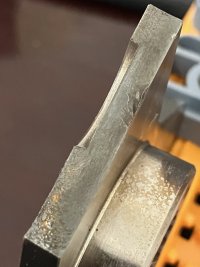 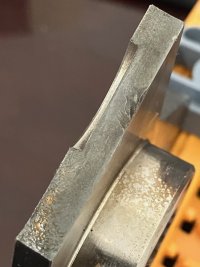 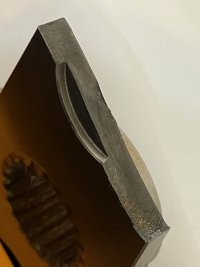 Looking at the latest version of the drive flange it was found that the 2 remaining pins in the flanges had their welds cracked almost full circumference. 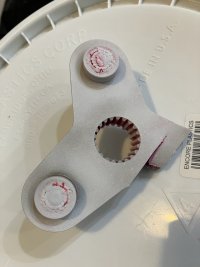 Knowing that Jan used dowel pins that are hardened, I am quite certain that these welds cracked the moment they cooled, so in my opinion the failure of the pin welds did not contribute to the failure of the flange itself, EXCEPT that I do believe that the high heat input associated with the pin welding lead to an unfavorable state of temper in the parent material where the fatigue fractures then set in. As one can see, 2 fractures for the new flange with welded pins and 1 fracture for the older flange that had no welding on it, despite a 30% smaller cross section caused by the counterbore for the nut.

When this conversation started, there was a high probability that both of these engines were destined for the scrap heap. Eric Miller was insured, his airplane was written off and Hubelbank decided to repower with a different engine. I have worked to acquire both gearboxes and Hubelbank donated the rest of his FWF so that a mule could be put together to test potential solutions, including a solution for the cantilever engine mount which can flex under prop loads resulting in more misalignment between the crankshaft and gearbox input shaft, exacerbating the already problematic durability issues.

Throughout this process I have fed Jan the information gathered about both failures in the hope that he could recognise that this is in fact a serious issue, more so if he is using the same input flange on his current crop of engines. However so far Jan appears to be in complete denial and totally dismissive of these 2 incidents. "Its the customers fault" seems to be the motto. "Both aircraft were using a non approved engine controller". "Hubelbank failed to follow the gearbox service bulletin" The fact that the "obsolete" flange outlived the "approved" part by a factor of 2x to 6x is apparently totally irrelevant.

Folks, the more Viking 110 owners who inspect their drive flanges and provide feedback to me on this forum or by email, the better idea we have of the significance of the problem. At least for this application, it appears that the web of the drive flange is simply too thin for the loads imposed on it. The heat treatment of the most recent version of the flange is highly suspect, this will be confirmed shortly through a metallurgical analysis of the 2 failed flanges in my possession.

From a design point of view I am making a departure from the BMW type giubo to a Centaflex A type coupling. The flex plate will be replaced with a CrMo flywheel to help with high RPM engine pulsation. The Centaflex coupling will be bolted directly to the flywheel itself and instead of the gearbox input flange there will be a tubular part to fit the ID of the Centaflex coupling and with internal splines to engage the gearbox input shaft. This will be the prototype for ground testing prior to starting flight testing. I will be working with other contributors to conduct a torsional vibration analysis of the system on our ground test mule. That is where we stand right now.
Last edited: Dec 4, 2022