Any thoughts on my AC-5M project?

I've made the first taxi test recently, and all is well so far. I'm hoping for first flight next week, depending on how the ground testing moves along. I'd be grateful for any input from the members here, as I've yet to have my design vetted in-person. Except, by a couple of A&P's who seemed impressed but befuddled. 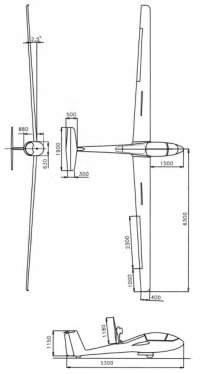 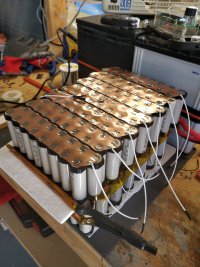 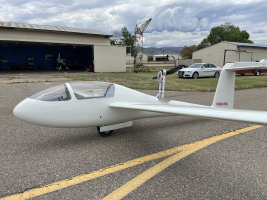 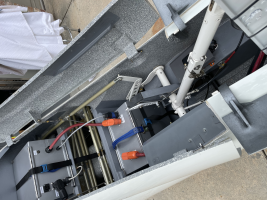 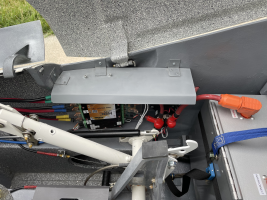 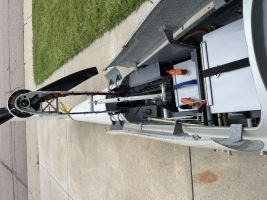 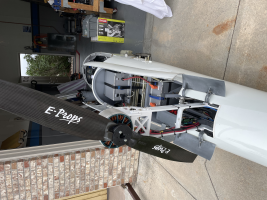 Impressive! Hope your neighbors are tolerant of the motor run in. How much thrust are you getting? What is installed weight? I do have an ultralight Hawk here....too heavy for PT 103, but an E powered Hawk would be neat. Please keep us informed on flight tests and some performance data.

I didn't know that they ever made the front canopy removable on the Russia, I always thought the front part was bonded in.

How many feet of climb do you figure you'll get from each charge?

I was getting about 170 lbs of static thrust on the test stand, about 40 lbs more than the ICE engine. With much less drag, I'm hoping for good performance.

I've run it wide open for 3-4 mins in testing, without airspeed the motor temps out first. I'm guessing this will equate to at least a couple thousand feet of climb but I'm hoping somebody smarter than me can predict this.

Is the prop positioning for retract done with a mechanical system (brake) or by stepping the motor? I've seen somewhat surprising failures with the latter, would suggest some redundancy if that's the approach you're taking.

Also, if that's an unamplified GPS antenna (no LNA) right under the motor, don't be surprised if you have degraded performance (even loss of lock) when the motor is running, especially when it's starting or stepping. The inductance of the motor might be high enough to avoid this, but I wouldn't bet on it -- but you probably don't really care operationally, just something to be aware of.

Last comment -- I think what you have is a super reasonable, pragmatic approach, and I don't think too much safety equipment is needed for this particular application -- but if it were me, I'd really like to see a fuse in the positive line between the battery and the motor controller, and a temperature monitor buried in the battery pack. Nothing too fancy, not even a contactor, but a good cheap insurance policy against external shorts and the ability to detect internal shorts as early as possible.

[EDIT: Actually now that I look closer I see what I assume is a contactor hiding just where I would put a fuse. I'd consider both -- but the contactor plus a temp probe is basically a pilot-in-the-loop fuse, which I'd be comfortable with.]

All good stuff, thanks! I've got 15lbs of electronic braking force tangent to the rotor, a mechanical brake is my backup plan. I'll have to determine if this will work with flight testing.

I have thermocouples embedded in the packs and an alarm on the panel, a fuse is on the negative line to the controller but you can't see it under the grey shield.

I'll have to monitor the GPS performance more closely, moving the antenna's no big deal though.

To be clear, my concern with stopping the prop is not the braking itself — the motor should be fine to do that reliably — but aligning the prop with the fuselage. The electronic approach here is to run the motor as a stepper motor until it’s aligned, but that makes position sensors critical, and they tend to have surprising failure modes.

I would much prefer to have absolute rotor position control but I couldn't find a controller that would do that for me. What failure are you referring to? Are you thinking that the prop could start windmilling again as I'm retracting it?

addaon said:
unamplified GPS antenna (no LNA) right under the motor, don't be surprised if you have degraded performance
Click to expand...

probably not an issue when over an airport takeoff and landing......

If your control doesn't give absolute control, then this doesn't apply. But for curiosity's sake...

With a sensored controller, it's quite reasonable to get torque down to zero RPM. However, because just about every brushless motor has multiple electrical revolutions per mechanical revolution, this isn't sufficient to determine absolute position of the shaft. If you could determine absolute position of the shaft, then absolute control is easy. There are a bunch of systems for this, but probably the most common is an absolute magnetic rotational position sensor, which puts a two-pole magnet on the end of the shaft opposite the propeller, and uses a Hall-effect-based-sensor (usually multi-axis) to convert the magnetic fields to position. These sensors are wear-free (non-contact), simple, and robust, but they require calibration and are sensitive to the exact position of the sensor. I've seen real-world cases of the PCB with the sensor shifting from vibrations, giving a significantly different position reading. It's easy with this type of sensor to make the Hall sensor redundant, but it's hard to make the magnet redundant, and while I've never seen a magnet come off a shaft, I'm sure others have. Optical sensors are also great for absolute position sensing, but are a bit pricier and a bit more sensitive to dust and other problems; best of all, as always, is multiple sensors.

There are ways to manage this in the controller that don't add much cost or complexity. Probably the simplest is to use a single absolute magnetic position sensor on the shaft, and fault if it is not zero'd at startup (and mechanically constrain the system to make this true -- start the controller with motor retracted). During operation the per-phase Hall sensors are used as an incremental encoder, which is checked against the absolute encoder, allowing fault detection and continued operation if either fail (either by fault characterization, or by using BEMF as the third input to a voting system). This allows absolute positioning even if the absolute sensor fails, as long as the controller is continually operational from the time of a checked-valid start condition. In your particular case you could even go pure incremental if the motor controller always starts when the motor is retracted and therefore aligned; just count steps until you're back in that orientation (or 180° off) again.

In any case, the failure class I'm most worried about here is the system reporting green, but due to a sensor fault, it stopping the propeller at e.g. 90° off from the correct retraction orientation, and the rest of the retract system blindly trying to put a square peg into a round hole.

addaon said:
magnet come off a shaft,
Click to expand...

insert into the prop flange ? round magnet in drilled hole perhaps even captured by prop on top and smaller hole out the back for sensor access. .....of course the sensor can vibrate loose but not the same forces as a rotating shaft.......

at this stage of the project .....not a reasonable task.
S

-I was wondering about airworthiness, then remembered that AC-5s are experimental category.
Last edited: Sep 3, 2022

The process for amending my Airworthiness Certificate was surprisingly straight forward. Essentially it was just an engine swap, I had my new paperwork in less than a week. I’m happy to share the details if someone’s at this point on their project.

What power usage were you seeing? Is full throttle hitting a current limit or an rpm limit?

addaon said:
What power usage were you seeing? Is full throttle hitting a current limit or an rpm limit? Good stuff!
Click to expand...

Can you clamp or safety wire some kind of cooling fin heat sink device or pieces to the motor, so when you are flying (instead of ground runs) the air through these fins helps dissipate the motor heat a little? Something along the lines of the old J. C. Whitney catalog "poor man's oil cooler" that clamped on to an engine oil filter with aluminum fins that increased the surface area for heat to radiate out of it. 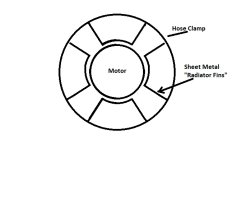 So far I'm seeing 230A at 115V through the controller. The RPM is limited to 3200 due to prop limits, I've yet to determine the best prop pitch. I think the motor temp is good since with sufficient airflow in flight I should see the battery capacity as the limit. I was afraid the controller or traction pack would get hot first which would mean some re-engineering.
You must log in or register to reply here.
Share:
Facebook Twitter Reddit Pinterest Tumblr WhatsApp Email Share Link