Any one else watching the SpaceX launch?

A little over 1 hour till launch as I type this.

For those who aren't aware, this is the first manned flight by SpaceX, although they have done unmanned launches.

The launch vehicle lands itself and can be refurbished in a matter of days. They would eventually like to get the capability of daily launches instead of months like previous vehicles.

And for the first time in 9 years, the USA will have it's own capability to for manned flights

Watching for sure, this is a big one!

Just went up on the hill to see how clear it is. Too many clouds to see that far today, so I will watch it on TV. 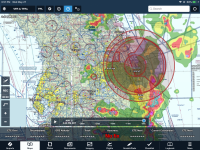 Launch has been scrubbed due to weather, at T-16 minutes.

They will try again Saturday.

I've been following but not sure why? must be something important we all should see.

I had it on in the hangar after flying today, until they scrubbed it.

The astronauts both had fuss with sleeves and gloves, had face shields interfering with their cockpit duties until after they finally closed the shields, fooled with their gloves more once they were on, and could be seen to bang parts of their heads on the inside of the helmets too when trying to turn or tilt their heads. It seems fashion played a bigger role than human factors in the design, and work on the new get-me-down suits is far from done.

I did notice them craning to see the kneeboards, seems like a sub-optimal location for them in that position.
But it is a test flight, and they'll have plenty of opportunities to complain about that to fix for future missions.

But you would think more thought and planning would have went into something which should be considered important.

The most important thing was that they were transported to the launch tower in a Tesla.

I’m a big fan. I love people who use imagination the way it should be used. Everything about this is imagination being utilized. Great things will come of this, I was bummed it was canceled.

wsimpso1 said:
It seems fashion played a bigger role than human factors in the design, and work on the new get-me-down suits is far from done
Click to expand...

At one point in life, in a galaxy far, far away, I learned the whole riga marole of a thing called "aviation human factors"...

As a flight engineer, FTE & pilot, I flew with both the HGU-34 & HGU-56 helmets, but in the development of our flight test programs here at my company, I wanted to try to get away from those, and opt to do a motorsport-type solution that looked much better:

So I jumped into a PA28 cockpit recently, and threw on my old karting helmet (the black one above). Even with the neutral visor down, I was able to see all instruments, radios and circuit breaker panels without issue.

Not really. Found out that I was unable to consistently look down and see my kneeboard (at least at the eye angle I am accustomed to), or look down (consistently) to the floor where the fuel selector lever or belt buckle was!

I do have to admit...those SpaceX suits look like something out of Star Trek!
Last edited: May 27, 2020
R

I was watching the process since about three hours before the scrub. I've watched every crewed launch, minus a couple of shuttle launches, since Apollo 14, including Skylab and the ASTP. This one went very smoothly except for the weather.

Regarding the suits, I saw the guy in the foreground have a little trouble with the zipper lanyard on his left-hand glove, trying to tuck it into the pouch provided. It's too long, and they need to have the ground "ninjas" do it for the crew, shortening that lanyard. The helmets were only an awkward item until they rotated the seats up into the launch position, after which neither astronaut seemed to have no further issues with visibility. The suits went through at least three major iterations in the design process, and these two astronauts had direct input into the design process. I'm sure any issues will be improved over time. None were more than a possible annoyance in this launch, and iteration is the SpaceX way.

Are they "pilots" or passengers? The test flight and docking was autonomous (or controlled remotely ?), as far as I know.

Fully pilots, in the sense that anyone "pilots" a spacecraft today. I mean, AFAIK, they don't manually steer the flight with a "control stick" per se, but they can direct and/or override any of the computer functions, including manually initiating an abort with the big black "T" handle at the bottom of the instrument panel between the two center seats. They can manually control docking and reentry if the automatic systems go south or make a mistake. And those screens aren't just passive displays - they're full-sized touch screens. Excepting backup systems and a few others that are provided switches under the big touch-screen displays, those screens the latter are the primary crew control interface with the vehicle.

During the design of the Mercury project there was a big argument between the designers and the astronauts. The former wanted the entire flight to be run solely by the computers, and not even provide manual controls to the "payload" onboard. The astronauts dug in their heels and insisted on being able to take full manual control at will. The compromise that was struck has persisted ever since, with the computer systems providing the basic overall control of the mission, while the pilots can - and do - take over manually for many critical "fine" maneuvers such as docking or in an emergency. Dragon continues that tradition, although the astronauts have more automation available to them for things like docking. NASA and SpaceX released a crew docking simulator to the public that shows the computers doing the actual "flying", but the modes and steps are enabled positively by the pilot.

I asked a shuttle "pilot" if he actually hand flew it in some way like an airplane. He didn't really answer.
The definition of "astronaut" is also vague. Can include "politician" according to this: Astronaut - Wikipedia

The question (pilots or passengers?) may be better highlighted when they fly the dedicated 'tourist' flights. Presumably, there will be at least one fully trained astro there too, but presumably for emergency purposes only.
2
You must log in or register to reply here.
Share:
Facebook Twitter Reddit Pinterest Tumblr WhatsApp Email Link