I saw that Monocoupe in the Smirhsonian! Udvar-Hazy.
I figured peeling would be critical on the edges and shear towards the middle.

That may be true to whatever degree, I'm not sure. But the joint should be designed such that the holes in the base metal get "opened up" or "oval'ed" before the rivets break.

Interesting discussion. Especially VB's comment on the unzipping rivets! Do have a copy of a Graham Lee planset (somewhere...), and they are worth it for his building methods. I'll have to see if I can find the information on the air frame design with a pentagon in front and a triangle behind where the pilot fits. Thanks guys!

I need to know how anyone can see out of that thing on takeoff or landing. Seriously, does it come with a submarine periscope?

Victor Bravo said:
Other folks here with formal training can feel free to correct me, but I do believe I have learned that aircraft riveted joints should be designed for "bearing failure" of the base metal sheet/tube and NOT "shear failure" of the fastener. Shear failure means that when the load reaches a certain point the first rivet fails, which puts the same total load on a fewer number of rivets, so the second rivet fails sooner than the first, which puts the load on even fewer rivets and then the third rivet fails really fast, and the structure "un-zips" almost instantly.

As I said, anyone who has the education to verify or contradict this, please do so ASAP
Click to expand...

one calculates all of the above....bearing of the various parts, shear of the fasteners. some rivets and holes are under more stress than others based on the distance from the centroid of the pattern and moment of the load to that centroid. See post #188. Obviously you want your loads for each hole to be less than shear of the fastener or bearing failure of either of your joined parts. Knowing the loads on the joint and loading of the aircraft is critical. (I do not have formal training in "Aircraft Stress Analysis") There are also issues of cycle fatigue, and safety factor as regards how close to yield of the material you want to design for. ....it gets pretty complicated which is why "Aircraft Stress Analysis" is a specialty.
Last edited: Oct 15, 2019

'pastie, you are correct, which is exactly why I entrust those types of calculations to an old gray haired retired engineer who has forgotten more about structures and stresses than the instructors at today's engineering schools will ever learn What I regurgitated about bearing and shear failures was nothing more than a few of the microscopic flakes of knowledge that fell off the bottoms of this guy's shoes as he walked through my hangar, which I desperately chopped up and snorted hoping to learn something.
Last edited: Oct 16, 2019

Tube and Gusset was used on hovey/Volmer jensen designs before any other.Some one can correct me if I am wrong.
A two seat T&G Hovey Beta Biird would be great.

Victor Bravo said:
which I desperately chopped up and snorted hoping to learn something.
Click to expand...

Dangit VB, warn us a lil. Almost ruined another keyboard with coffee!!!

"unzipping" brought back memories of watching Molt Taylor do a drop test on the Imp about 45 yrs ago. a line of driven rivets exploded with rivet heads zipping all around.
Molt unfazed said "well, gotta do a little more work there I think"
B

mullacharjak said:
Tube and Gusset was used on hovey/Volmer jensen designs before any other.Some one can correct me if I am wrong.
A two seat T&G Hovey Beta Biird would be great.
Click to expand...

Some of Hovey's are T&G some like the Whingding & Beta Bird weren't.
B

I found myself wondering about the weight of a aluminum tube and gusset vs. 4130 tube frame. So as an exercise I decided to try to design a very simple truss as an example. This is a possible one side of a tail boom for my aerobatic part 103 thoughts. I thought I'd show my work as I am a software engineer if anything. Hopefully some of our more knowledgeable posters can point out my mistakes.

I estimate a 6 G pullup at a VNE of 150 kts requires ~250 lbs downforce on the tail. For a four longeron tail boom, split it into two sides. Assume the 250 lbs downforce is split equally between these two sides for a 125 lbs downforce. Have the tail boom be twelve feet long. Use square 2ftx2ft truss bays because it makes the math simpler.

As this is for an aerobatic plane assume the load could be equally positive or negative. So any tension member in the positive loading would be a compression member in the negative loading. To size the tubes, use the lightest tube such that 80% of the pinned Euler buckling load is at least 150% of the calculated load. See spreadsheet for my tube sizing calcs.

On the aluminum I used my tension strip idea from a previous post instead of a diagonal tube, since nobody said it was a terrible idea.

I'm not sure how to design the gussets (still studying) but unless there are five pounds of gussets and rivets the aluminum tube comes out lighter. Either could be lightened by stepping the longeron sizes down as you go back, a preliminary look at a warren truss made the 4130 version 1 lb lighter. Another lightening option is to make the bays shorter toward the front where the tail has more leverage and longer toward the back where the forces are lighter allowing a smaller longeron.
T

For apples to apples what would be the weight gain if you used tubes instead of straps. I think before someone mentioned the Fokker fuselages. The cells are steel tube but used cable for the cross bracing of each cell.

Here's an interesting random thought... If we make a tube and gusset fuselage, and we just added one small extended "tang" to the design of each of the gussets where it needed to be, we might be able to use the gussets as the anchor points for a cable braced truss. I believe the cable braced method is accepted as the lightest possible way to make a truss fuselage.

Additionally I understand there are synthetic fibers that have the right properties for use in a trust (whatever the correct amount of stretch/spring/strain is). So if the two "cables" in each bay (now light weight synthetic fibers) are lighter than a single diagonal aluminum tube... it might be a reasonably innovative and greatly simplified way to build an E-AB truss, reducing the number of fittings and parts count far below the old classic method.

The key to this will likely be some better or lighter method of tensioning the cables instead of a classic turnbuckle. A nut system at the attach point on the gusset anchor, or a small bracket riveted to the gusset that you can tighten a nut against.

Don't know about the cost, but a piece of the 1/16" round Graphlite carbon rod would make a good low-stretch "cable" brace, with a threaded fitting bonded and/or swaged on to the ends.
Last edited: Oct 17, 2019

Victor Bravo said:
. I believe the cable braced method is accepted as the lightest possible way to make a truss fuselage.
Click to expand...

Might as well go way down this particular rabbit hole?

Victor Bravo said:
Additionally I understand there are synthetic fibers that have the right properties for use in a trust (whatever the correct amount of stretch/spring/strain is). So if the two "cables" in each bay (now light weight synthetic fibers) are lighter than a single diagonal aluminum tube... it might be a reasonably innovative and greatly simplified way to build an E-AB truss, reducing the number of fittings and parts count far below the old classic method.
. . . .
Don't know about the cost, but a piece of the 1/16" round Graphlite carbon rod would make a good low-stretch "cable" brace, with a threaded fitting bonded and/or swaged on to the ends.
Click to expand...

Those wires will be at resonance with something. Does anyone know about the fatigue properties of these rods if they are free to vibrate? There might also be a corrosion challenge where the CF meets metal.
There are other fibers that are stronger in tension, but creep is also something to think about.
Most of the fibers have rates of thermal expansion different from AL, so that would need to be considered.
I'd miss the compressive strength of the cross members during some unexpected loading scenarios (don't say "crash", it brings out the chorus). That would be alleviated if tension wires went both directions.
An interesting idea, as long as it works and the dang wires don't have to be retensioned all the time.

Yes, I was referring to bi-directional cross-bracing with all "wires" loaded in tension.

I imagine a 3 inch long piece of small steel tubing with moderate wall thickness. The outside of the tube is threaded for an 8-32 or 10-32 nut. The inside of the tube is .020 larger than the OD of the carbon rod. The rod is bonded into the tube with the correct epoxy adhesive, JB weld, cab-o-sil, cotton flox and Safe-T-Poxy, whatever is appropriate.

That seems like way more work than cutting a tube and drilling a few holes.

If the goal is minimal weight, and it's a 25% reduction, and the goal doesn't care about cost or simplicity then maybe there's a there there.

But if the goal is simplicity there's nothing simple to my mind about having to frabricate many pairs of tensioned tube/rod things and ensure they're all sound and so on, in addition to making the normal step ladder frame anyway. Two totally different processes.

Cut tube, drill hole, rivet, is all quite uniform and simple. There's no making sure the tension is set perfectly, or whether the epoxy joint will hold or whatever.

From a kit maker perspective it sounds like a bad time.

From a kit customer/assembler perspective it sounds like a bad time.

There's a reason everyone left tensioned frames far behind and went to structural trusses. I'm going to guess because it's more uniform to make and more predictable to maintain.

Again not that i doubt the method works and I even kindof like the idea of using some kind of synthetic fiber cable with some kind of tensioning system to lace up a light but strong frame for a WWI replica. But that's straying off the topic.
Last edited: Oct 17, 2019

Agreed, simplicity favors the all-tube method. My big idea was that maybe the gusset itself could become an anchor for the wire braced structure without adding extra parts, but there would still be extra parts.

I chased the "airplane in a suit case" rabbit down that hole and was lucky to come out sane(ish)...


I have to see it stereo to understand it... 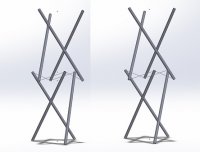 Idea #2 looked great until I realized it wouldn't work. 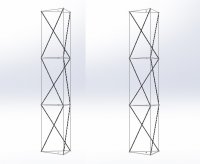