hole in the ground

This is an interesting concept. These guys have built a 3-axis aircraft using one of their high performance trike wings.

Not too sure about spoileron control effectiveness but I think that’s a function of the canvas wing and lack of structure to mount ailerons to. Tail feathers look “compact”. Certainly good for thought.

That's pretty neat! Did they say whether the pilot's feet are retractable through belly doors or whether it is a "wheeled" sailplane?
H

hole in the ground

Single retractable center main. Tail skid on the inverted tail (doesn’t look strong enough for me but apparently is).

Lots of detail in this video.
[video=youtube_share;O8lBpVfIGX0]https://youtu.be/O8lBpVfIGX0[/video]

Edit: perhaps a challenger for motorbike (moped) of the sky?

Huh. What a neat little beast! Another example of "convergent evolution". Next thing you know, they'll be using molded wings and carbon-fiber skins. :gig:
Y

Topaz said:
Huh. What a neat little beast! Another example of "convergent evolution". Next thing you know, they'll be using molded wings and carbon-fiber skins. :gig:
Click to expand...

I think that's exactly the point. Felix Ruehle started building fixed wing (as opposed to flex-wing) hanggliders in the 1990s and managed to make his product, the ATOS the defacto-monopoly in the market (at least here in Europe). He's been talking about this type of machine for a while (and had another flying wing concept based on the ATOS wing). The idea is that the whole machine can be transported on a car-roof. While I admire the engineering behind it, I think the idea "build a sail plane out of a hangglider" won't be too much of a game changer as is the "build an hangglider out of a sailplane" (aka SWIFT light). The ATOS wing is pretty expensive, the performance is about what you'd expect. Rigging an de-rigging takes a lot longer than with a plain normal sailplane. So in other words, the only advantage over an electric self-launcher is the fact that you don't need a trailer. I doubt that's enough to make this economically successful.
H

The spoilerons on the glider and trike version work fine. Yes, the wing lacks torsional strength for ailerons, but plenty for flight in very turbulent air. Well proven platform.

The trike version has better visibility, but 28 to 1? That's worth a lot.

I'd fly that in a heartbeat.
Y

No, that's not the reason for using spoilerons. The wing is torsionally quite stable, and has to be, since as with any swept wing planform you end up with bending-torsion coupling. In fact there is a similar design, called the "Impact" that uses ailerons instead of the spoilerons. Both D-Boxes are very similar.
The reason why the Atos doesn't have ailerons has to do with the fact that the hanglider uses the spoilerons for (a combined) yaw and roll control, but weight shift for pitch. If you want to roll with ailerons and not have to deal with negative yaw moment, you'd need to differentiate the ailerons, but in a swept wing, this would mean that you get a change in pitching-moment whenever deploying the ailerons (they'd be working as elevons, effectively). This is not acceptable. So no differential in the ailerons. The Impact solved this issue with a rather strong anhedral, which comes with its own problems. Spoilerons do the job, but a lot less effective (and efficient) than ailerons. Rolls and inverted flight strictly prohibited
A

Spoilerons are actually more efficient lift control devices on flying wings than are flap-type elevons, especially if they open a gap between the leading edge of the spoileron and the wing skin. This can be used to maintain flow attachment at higher AoA, since swept wings suffer from reverse spanwise flow problems and roll stability issues when they stall. The spoileron can mitigate this.

I must say I'm very impressed with this little beastie! A triumph of design evolution and an interesting thing to watch where it all goes.

Anybody know about how much the ATOS Wing or AC-21 are going for? Also wondered if the AC-21 had an electric version.

Id does not fold as well as a hanglider/minitrike but quite close.

AC21 was build on the base of PHANTOM wings...

Probably actually is not in production.?

I am in no way qualified to judge this glider as good or bad but it just looks pleasantly natural in the air, doesn’t it?
D

henryk said:
AC21 was build on the base of PHANTOM wings...

Probably actually is not in production.?
Click to expand...

Is this the PHANTOM wing?
https://www.delta-club-82.com/bible/487-hang-glider-stalker-phantom.htm

The link above also leads to the manual: https://www.delta-club-82.com/bible/manuels/phantom.pdf

dew777 said:
Is this the PHANTOM wing?
https://www.delta-club-82.com/bible/487-hang-glider-stalker-phantom.htm
Click to expand...

at first it was STALKER models,before PHANTOM...

That always gives me a huge smile, every time I see it. Really looks like a nice little ship.

Is it part 103 compliant? Being a motorglider, I suppose it would fall under the “powered vehicles” section and have to meet stall speed and max speed. It looks pretty slick.
B

Topaz said:
Huh. What a neat little beast! Another example of "convergent evolution". Next thing you know, they'll be using molded wings and carbon-fiber skins. :gig:
Click to expand...

The D-Tube and ribs, are built from molds; all carbon and Nomex.

Felix Ruehle built the Exxtacy, (late 90's) before he made the Atos.
The Exxtacy was a good learning platform for Felix , both gliders
are made from carbon and Nomex ; but the Atos is much lighter
and stronger. I know of one Atos, that didn't have a tail, the
pilot got into a shear-line around Denver, and tumbled the glider.
He flew it down and landed unscathed, probably had to relieve
himself afterword ?

I have 2 Exxtacys ; one i fly, and one for parts, if i ever take out
a D-tube.That second Exxtacy, is the airframe i plan to use in my
stand-off scale BKB-1 , with the engine and folding prop.
I'll start a Thread on it ; when i finalize the design.

On those spoilers :
I've had my inside wing , stuck in the core of a 1,500-ft/min
up thermal before ; those spoilers will deal with that amount
of energy, (Quite Well) thank-you.

This is me over Crestline, in 2017 ; just took off, and hadn't
even had time to get into my harness yet :

PS:
Is it still considered "Foot-launched" ; if i'm running off
the mountain on two fake feet, made of carbon and SS ? 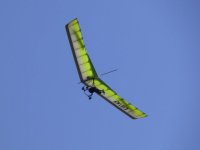