I'm in the process of designing an ultralight aircraft for a high school independent study and have come to a gap in the opensource knowledge base I hope this post can shed some light on. I am in the detail design phase and am currently working on the structural layout of the wing. I unfortunately can't find much information on aileron hinge designs or any sort of naming standard for aerospace grade bearings. In other words, are there AN specifications for bearings? I would imagine that bearings would also need to meet some sort of mil spec rating as a locked up bearing could be catastrophic in flight. Regarding aileron hinges, I cannot find detailed information on how ailerons are typically attached to the wings. From looking around at some photos and videos, it seems like Belite just uses heavily greased bushings for their junker ailerons and Peter Stripol just uses piano hinges for his differential ailerons on his MK3 design. While both of these methods work, I was hoping to do something a little smoother like having the aileron torque tube rotate in a needle bearing. That being said, I have concerns on how much weight this would add and if it is necessary at all (simplicity is elegance). Anyway, any help would be greatly appreciated. Thanks!

On any light aircraft structure you will have some flex. So whatever hinge method you use you must expect that there will be a little wing flex. This causes some hinges to bind or jam. I strongly recommend against piano hinges because of this.

Welcome, Ollie. In a legal FAA Part 103 ultralight every little bit of weight matters, so the lightest effective solution is the way to go. VB is absolutely right that piano hinges can bind, though that can be mitigated by using separate sections rather than one continuous hinge. How is your wing put together in terms of materials and construction? With that info we could point you to a couple of proven, successful options.

Ollie Krause said:
I was hoping to do something a little smoother like having the aileron torque tube rotate in a needle bearing
Click to expand...

Friction is going to be small on a part 103 ultralight. I'd be tempted to use 'plastic' bushings. They are light, cheap, durable and proven to work in experimental aircraft provided the engineering has been done well.

Your hinge style and amounts are dictated by the construction type. A Minimax has 3 bolts through metal bushings that ride in holes in metal straps mounted to the ribs. Slick. But the aileron is built like a small wing with a spar and D tube so not many hinges are needed. A ladder style may need more hinges since the aileron gets its bending strength from the wing. But don't over think it with needle bearings, see HW above.
Last edited: Feb 26, 2020
R

To be a pendant, the top wing skin isn't used in "continuous" form, the aileron is still a separate component, not that that changes the principle of it...

Most control surface hinges aren't mil-spec bearings or anything like that. Traditional welded steel structures use short lengths is tubing welded to the fixed and moving surfaces with pins inserted. Piano hinges are also common. Many ultralights use pairs of AN42 series eyebolts with bolts and castle nuts for hinge pins.

Here is how many ULs are hinged. Two steel U brackets riveted to the wing and aileron tubes with an AN3 bolt as the hinge pin. 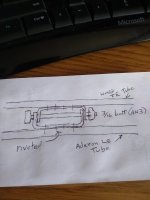 The man who invented autocorrect died recently, he was very I'll.

cheapracer said:
The man who invented autocorrect died recently, he was very I'll.
Click to expand...

Is that the same fellow that invented the cut-and-paste function?

Cessna uses piano hinges on the ailerons their singles. All of them. But they're not hardware-store piano hinges, which are just sheet metal wrapped into shape. Such hinges can unwrap under stress and let the surface depart. Good aircraft piano hinges are either a full wrap, or machined from an extrusion.

I could't find a picture of the full-wrap hinge. Might not be made anymore. It was aluminum folded so that the attaching hardware passed through two layers of hinge, not one, and pulling hard would not open the wrap.

Cessna used extruded hinges, three per aileron, and they did not bind. Their chief disadvantage was wear, as dust and grit easily got into them. The pin was and still is aluminum, to avoid galvanic corrosion, and it wears easily. They are supposed to be lubricated with dry graphite, but mechanics would usually just oil them, which makes a mess and attracts dust that accelerates the wear. I used to mix the dry graphite with brake cleaner and drip it into the hinge, and the brake cleaner would wick the graphite into where it needed to go, then dry up. No more squeaking or attracting dirt.

Champs and Citabrias used bushings early on in arms that were bolted to the aft spar, and a bracket on the aileron fit over the arm and a both passed thru and was castle nutted and cotter-pinned. Some later airplanes had ball bearings there, pressed into the arms, but they weren't necessary. They also went from bronze bushings in the rudder and elevator hinges to needle bearings, which rode on the bolts and ate them. Vibration from the prop caused the needles to brinell the bolts and make the hinges start clunking and grinding. They should have stuck with the bronze bearings. Much cheaper and lasted longer.

Cessna used plain bushings in the elevator and rudder on airplanes up to the 172, but the bolt passed through another, steel busing that was pinched between the legs of the hinge backet on the control surface. That steel bushing rode inside the bronze bushing in the bracket on the fin spar or stab spar so that the bolt didn't wear. If the mechanic didn't torque that bolt/nut properly, the surface's bracket would pivot and rattle on the bolt and wallow the bracket holes out. The 180 and up used sealed ball bearings in the fin and stab brackets. Water got into them and caused corrosion and partial seizure over time.

Edit: Hey! I found a picture of the folded piano hinge. LAS Aerospace.

Dan Thomas said:
I used to mix the dry graphite with brake cleaner and drip it into the hinge, and the brake cleaner would wick the graphite into where it needed to go, then dry up. No more squeaking or attracting dirt
Click to expand...

I am so going to steal this idea, thats great thinking! Thx.

cheapracer said:
The man who invented autocorrect died recently, he was very I'll.
Click to expand...

No, it was the guy who invented copy/cut/paste.

Lawrence Gordon Tesler was co-developer of the first computer GUI system at....

No, it wasn't Microsoft. It was Xerox!!!

poormansairforce said:
I am so going to steal this idea, thats great thinking! Thx.
Click to expand...

Why not just rubbing alcohol and not deal with the poisons of brake cleaner.

Hinge will be determined by alerion design.......Might go to the airport and look at some different airplanes.

cheapracer said:
Why not just rubbing alcohol and not deal with the poisons of brake cleaner.
Click to expand...

You buy and use the non-chlorinated brake cleaner, not the chlorinated stuff, which is dangerous. Getting it hot can produce mustard gas.

Kleen-Flo makes the non-chlorinated stuff. Its ingredients are n-heptane and isopropyl. No tetrachloroethylene.

Wow! Thank you all for such quick and insightful replies! Here's some screenshots of my current wing design. Note that this is just the part studio view and it only includes all unique parts (ribs and such haven't been patterned yet).

It's heavily influenced by that of the Affordaplane and Belite ultralights. Right now, a lot of the dimensions are purely conceptual and based of similar aircraft and some basic calculations. Once I finish a first draft of the detailed wing design, I plan to do finite element analysis to verify its strength and aerodynamic properties. I imagine that I'll end up changing a lot of the design in the process. If anyone here is familiar with Onshape (or really any CAD program for that matter), you can see the current version in 3D from my public document here. Based on all your responses, I think I'll go with the U bracket hinge mechanism as it will be light, affordable, and resistant to lockup when the wing flexes.

On a completely separate note, I'm not working on this project alone. I just co-lead the design and administrative teams of a larger 13 student organization (completely run and organized by students as well). I really love the community you have going here and I hope my team and I can be of use in the future.

Whoops that image didn't upload for some reason. Here they are:

As you can tell, I'm still early in the detail design phase. I'm taking my time to variabilize the whole thing though so it can be a sort of ultralight wing design generator when I'm done.