Aileron add-ons - What is this?

Anybody know what this is? The cigarette looking things on the trailing edge of the aileron. There is one on the top and bottom and on both ailerons. This is on a Velocity. The new owner and I were thinking it was to increase roll forces/less sensitivity. 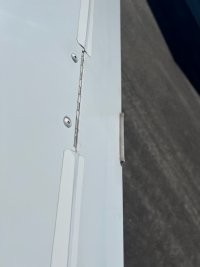 A Gurney flap - acts like a little force trim tab.

Normally, that would be on the bottom. These are on top and bottom and on both sides.
T

I would call it a Gurney flap too. Top, bottom or both sides. The usually a little crisper looking.

Still a Gurney Flap, but with it top and bottom. I am figuring the ailerons either had a dead band or the stick had no on-center feel. These things can happen because the boundary layer is pretty thick back there, and wiggling the ailerons inside the boundary layer either does not change wing lift or is below our threshold to feel it. Make the trailing edges a little thicker and/or put on a Gurney Flap top and bottom, and the ailerons become effective at lower stick travel and tend to want to stay on center. It feels better to the pilot.

On that airplane, it appears to be a little fiberglass piece glued to the surface.

If you knew you needed one when you were building, you would modify the foil to taper to a thicker trailing edge instead of to a thin edge.

Dan Gurney was a very successful race driver, car constructor, and entrant. Won LeMans and Grand Prix of Belgium one week apart in 1967. He was also exceptionally tall as international race drivers go. Huge number of accomplishments in there, but now we know him for:

The Helio had these. Koppen said it was to increase stick force because the FAA said the ailerons were too light.

This is a means of 'heavying-up' the control surface to generate feedback to the stick. Various methods are used and on a curved rudder, for example, a length of cord or rubber tubing is frequently taped to the TE, following the profile. Recently the owner of the sole Arrow Active ll was experiencing a 'dead spot' some 10 degrees each side of neutral. Probably this feature had been present on the aeroplane since 1932 and subsequent to its 1958 rebuild it had been fitted with an oversize fin and rudder. Perhaps this had compensated for this behaviour, but following a major rebuild in the 1980s, various corrections were made to the control system and rigging and the Gipsy Major was replaced by the correct engine, a Gipsy lll. All previous difficulties were now overcome and when fine-tuned the a/c achieved a level speed of 150 mph, some 6 mph higher than recorded performance in the 1930's. The low profile elliptical fin and rudder were restored at the same time.

I suggested taping tubing to the rudder TE and the rudder now responds to the smallest degree of travel whereas previously it would only 'bite' beyond about 10 degrees each way, which made aerobatics an untidy affair to say the least. Testing was performed in turbulent conditions and further tests will be carried out in smooth air to confirm the initial findings.

As a 'tribute' to the Active ll, which was my all-time favourite British pre-war biplane the empennage of the Flitzer Z-1R and S was designed to look similar to those of the Active. I had designed-in various means of changing the elevator loads should the control prove too light. The elevator was mass and aerodynamically-balanced but the plans show several tab variations including a dual tab, ie. on upper and lower surfaces at the TE. These tabs could be bent to whatever angle achieved the best 'feel' and when decided upon, the angle would be filled with a balsa wedge for a permanent 'fix'. In the event this system was never needed.

The Z-1R is shown here with just the basic trim tab fitted. (PS. I'm not sure this image is opening)

Further to my post above, here are some pictures of the Active including shots of the rudder TE mod. Other pictures are of the Active at various stages in its career to date. Further evaluation of the rudder response is delayed as the owner is currently busy flying a Spitfire Mk. lX.

The picture of the Active rounding the pylon during the King's Cup Air Race shows the taller fin and rudder and the last picture shows its Jungmeister stablemate.

Friend was a Navy Commander and Aero Engineer. He was the acceptance officer for aircraft designs, including the F-14. They attached a broomstick to the rudder of the Skyraider to deal with the unsymmetrical flow off the trailing edge.

Thanks All! Excellent info, as usual (sometimes a bit buried).
R

Conclusion, for structural and handling reasons, you are often better off with thick trailing edges.

Riggerrob said:
Conclusion, for structural and handling reasons, you are often better off with thick trailing edges.
Click to expand...

In this case, he thought the controls felt heavy versus the other Velocity aircraft he has flown (I think this is his 5th). I suggested he trim them back a little at a time to get the control feel he wants.

Update: He informed me he wacked them off and is now happy how it flies.
Last edited: Oct 4, 2022
M

Riggerrob said:"
Conclusion, for structural and handling reasons, you are often better off with thick trailing edges."

Riggerrob said:
Conclusion, for structural and handling reasons, you are oft
Click to expand...

Best scenario for good control feel and for ease of construction is a squared off trailing edge.

BJC is correct. Squared off trailing edges are best.

In general knife edge is the worst for a number of reasons: feel, dead band, flutter, recirculation.

Agreed blunt or squared-off TE's provide the best feedback and control. But for 'designs in the genre', which is where the Flitzer series rests - in that they are intended to represent aeroplanes which might have existed in the early inter-war period - a 'traditional', fairly sharp TE with a small radius is part of the deal.

I agree with what has been written above. The hinge moment of a control surface is easily changed with small changes to the trailing edge. This is best considered during the airfoil design stage. On wings, this means using a slightly concave lower surface aft of the hinge line of ailerons. This increases maximum lift, lowers drag, increases the hinge moment (higher stick forces), and the centering (if the stick is released, the ailerons will move to their neutral position even after small deflections). You can see this on all production gliders which for drag reduction have thin, sharp trailing edges.

If you don't want high stick forces ( because the airplane has a short side stick for example), keep the control surfaces straight aft of the hinge line.

Adding a small strip, wedge or tube to the trailing edge after the plane was built is simply a fix for an unsuitable airfoil or control system design.

Map said:
On wings, this means using a slightly concave lower surface aft of the hinge line of ailerons.
Click to expand...

One example: The Glasair uses the LS(1)-0413 airfoil, which is cusped in the lower aileron surface. At higher speeds, the stick force becomes way too stiff for my preference.

Map said:
If you don't want high stick forces ( because the airplane has a short side stick for example), keep the control surfaces straight aft of the hinge line.
Click to expand...

The fix was just as you wrote: flatten the bottom of the aileron. Makes a huge difference above 160 knots or so. Also makes it easier to build.

My experience with really heavy stick forces is mostly with the ailerons. Probably not an issue for strictly cross country flight.

I’ve not flown anything with PIO issues related to stick pitch forces. I have flown an airplane that provides no airspeed / off trim speed feedback through the stick. Really didn’t like it.