Aeroplane you have to dress into !

Stolen from the Biplane forum: 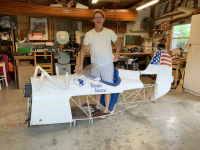 Jeez, now I want a Knight Twister even more...

Local friend of mine the same age as me built a Knight Twister. One day another friend and I landed on his farm grass runway and the KT was setting out front of his hanger and he was setting in the grass leaning against a tree shaking and chain smoking. Ask him what's wrong. He said " That D** airplane try's to kill me every time I fly it "
He ended up getting killed in an auto accident.

Possibly there is a step here on the lower wing...and then grab on the other side of the fuselage..or upper wing to haul your body in...foot first.

Speedboat100 said:
Coolest Hummelbird I ever did see.
Click to expand...

the landing speed!! Not for short fields, by any stretch.

Twodeaddogs said:
the landing speed!! Not for short fields, by any stretch.
Click to expand...

some of the fields I use are 400m long. That guy in the video probably used twice that.

Twodeaddogs said:
some of the fields I use are 400m long. That guy in the video probably used twice that.
Click to expand...

I've not flown a Turb, but can confirm that the Jodel D-9 is a joy to fly. But in winter you have to wrap up warm if it has no canopy since the airflow around the screen can cut you to the bone. I mentally designed much of the Flitzer Z-1 while flying a D-9. It used the same wing area of 97sq.' and initially a similar 1600 cc VW, although the intention was to convert that to 1834cc, which much improved the RoC. NB. I designed the cockpit on the Flitzer to sit low, out of the slipstream behind. a small aero screen. It's the warmest open cockpit machine I've flown.
You must log in or register to reply here.
Share:
Facebook Twitter Reddit Pinterest Tumblr WhatsApp Email Link