TFF said:
No, I can set you up. Not the same as designing your own plane, so not expecting you to bite or anyone else, really. I do have a friend who's time has come flying and he is getting rid of it.
Click to expand...

What's he asking for the RV4?
Y

Radicaldude1234 said:
So personally, I think the CAD exercise at my other thread CAD Exercise: Mustang Outer Mold Line has run its course. I can finish the model, but as I have no desire to build a P-51 replica given there is no viable engine and there are a bazillion of them around anyways, I've decided to go back to a design that I've been working on awhile back.

This is my second draft of the design using the techniques I've learned in the aforementioned thread.

Ooooh! I like the hell out of this! Good luck and please keep us well posted!
Y

Radicaldude1234 said:
Looks like there's some flow separation with the intersection between the horizontal and vertical tails that appeared after I gave the H-tail the correct incidence:

The horizontal stabilizer is where it is for spin recovery; with the current configuration, a significant part of the vertical tail (especially the rudder) is not blanketed by the H-tail.

My working hypothesis is that the airflow is sufficiently de-energized from flowing over that highly bulged canopy that the flow separates when it hits that weird intersection. As the H-tail is producing lift downwards, the air below is further de-energized as it is accelerated, causing separation.

I've tried moving the horizontal tail slightly up and down to no avail. Possible solutions that I'm looking at are a tail fillet or vortex generators. Both encourage the flow to stay attached.

Lastly, this is exactly what wanted CFD to predict as otherwise stuff like this would have only presented itself during a wind tunnel test (the guys I know working there at the college graduated) or during an actual test flight.
Click to expand...

I would much rather see the Horizontal Stabilizer further back. I think it would make production easier and still provide the spin recover you seek or am I wrong?

TFF said:
being a passenger on long flights in a RV7 I get the same thing; no place to stretch. Its seat positions are made to be flown or non flying be short; Im 5-10 or so. Pretty much most planes without a sliding seat are this way. If you do slide a tandem rear seat all the way clear of the front seat, you will have a very long fuselage. Lots of extra to carry around. If you and your significant other were going to takeoff for a year it would be great to have room and the stability of a long fuselage. If rear is rarely flown from, put the baggage between the positions. Its not going to be a nimble airplane though in aerobatics, but would probably be graceful. .
Click to expand...

Couldn't he raise the rear area like on the tucano ?
R

Apologies guys, I let these replies slip by me as I'm not on here too much.


Scheny said:
I have tried around in Solidworks FlowSim and the flow trajectories beautifully show how the air behaves, but I neither managed to get meaningful lift/drag values (2800N drag and 1300N lift seems strange for cruise condition), nor could I get this separation bubbles.

What did you use for the visualization to show this separation? Can you elaborate on that RadicalDude?
I would also be glad if you said how you set up the mesh parameters.

It's been awhile since I've toyed around with FlowSim, but I think I was monkeying around with the surface roughness numbers to get it close to "realistic" numbers. I also got the lift/drag numbers by setting Goals on select surfaces rather than the global values.

With that being said, I pretty much haven't use CFD analysis results in the design as of yet. All of my analysis was done with good ol' fashion equations and XFLR5 if I need to "cheat" a bit.


Yellowhammer said:
I would much rather see the Horizontal Stabilizer further back. I think it would make production easier and still provide the spin recover you seek or am I wrong?
Click to expand...

Moving the H-Stab back would require angled notches on the elevator to enable the rudder pivot, which would require the H-Stab be enlarged and negate any advantage of increasing the elevator moment. Furthermore, and this might be a typo on my part, spin recovery ability is based on the Vertical stabilizer area, specifically the area underneath the Horizontal stabilizer and is therefore not blanketed at high AoA. Of course, a H-Stab set too high, such as in a T-Tail, can also be blanketed by the wing...
L

RAD 123, Moving a Horizontal Stabilizer back, involves less surface area than making the HT Bigger, this also affects the Vertical Stabilizer similarly, however this depends upon your design choices/ aesthetics etc. on which way you want to go, personally I choose less area and less drag.
L

RAD 123, My suggestion was to extend the Lever Arm, by way of extending the Rear Fuselage Length, not just the HT. Everything can still be in the same position to each other, just further rearward - sorry for any confusion.
George
R

Oh man, it's almost been a year! 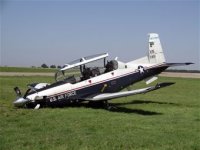 - A comfortable seat can make all the difference in aerobatics.
- If you're going to do aerobatics, have a system to get out of the aircraft.
- For a bubble canopied cockpit that has to be shut, I'd argue that air conditioning is not optional. In the sun, the inside temperature is at least 30 degs hotter than ambient. Even a forced air ventilation system would be marginal.
- High powered trainers make terrible instrument platforms.
- Airbrakes provide you MUCH more maneuvering options.
- You need adjustable trim in all 3 axes.
- Say what you will about a yaw dampers, but having one in a high torque aircraft will reduce the chance of you going crazy...especially in the traffic pattern.
- The point where it stops being fun is around 6Gs....that's WITH a G-suit!
- The sweet spot for the "this is f***ing awesome" performance feeling is about 5-6lbs/HP.

If you guys have any other considerations I glossed over, please let me know!

Radicaldude1234 said:
If you guys have any other considerations I glossed over, please let me know!
Click to expand...

Did first hand research include that landing?
R

Too true dear Lendo,
Back in 1953, PIlatus engineers designing the PC3 trainer got into a debate. Aerodynamicists wanted a long aft fuselage - for stability - while structural engineers wanted a short aft fuselage - to reduce weight. Structural engineers won that debate. After a few months of service, PC 3 instructors complained about problems with flat spins.
Back at the factory, Pilatus engineers did exhaustive spin tests that concluded with adding horizontal strakes, a dorsal fin and a huge ventral fin. Ever since then, all of Pilatus' military trainers have sported massive extra fins, strakes, etc. to improve spinning characteristics. The nose-dived shown here is an AT-6 Texan 2 derived from a Pilatus design.

Back in the late '70's think it was, I visited the Pilatus factory in order to gather topographical information to execute a commission for British Aerospace for a souvenir boardroom painting of Pilatus types. My great anticipation of flying in a V-12 Argus-powered vintage P-2 and taking photographs of the airfield, factory and Mt. Pilatus was thwarted by a November mist which rendered the area IMC for several days, unfortunately.

However, I was given a guided tour of the then new Pilatus PC-7 prototype on which they were trying various dorsal fin arrangements to provide better spin recovery characteristics and yaw stability with the aircraft. Hans Galli, Chief Test Pilot told me they experimented with cardboard and plywood fins attached using duct tape for these tests, but in an extreme autorotative condition, the deep dorsal fin option departed with a considerable 'bang' which must have been quite unnerving. We had a very interesting discussion about the available options at that time.
R

Well, I suspect the over abundance of strakes and fins was due in part that the airplane was going to be primarily handled by ham-fisted/stressed-out students (yours truly)…whatever options selected worked beautifully and the thing was no more difficult to exit spins, both incipient and established, than the DA20s and Citabria/Decathlons I’ve flown previously.

Riggerrob, The distance and area rules (leverage and area) are available for the best outcomes. Les than 3 times the MAC Chord is considered short coupled and requiring more tail feathers area, at the cost of Parasite drag. Someone told me the extra fuselage are is less than the extra HT and VT combined. I've never bothered to check as different designs vary. Then there's Roncz suggestion of at least 60% Wing AR for best HT- AR. Mine design is a little short for the HT-AR, I will adjust that, when I work out exactly where I put the Wing. Everything's a compromise and better to err on the side of conservative.
On Strakes, I believe in them, both Dorsal and Ventral Fin (also used as a bump stop and tie-down) which I used to extend the Rudder down for more unblanked rudder, in a spin. The more the better IMHO, I managed 51% of Rudder.
George

Unlike many of us during this holiday season, the design is going on a diet!

Shrunk length from 27ft long to just a tad above 25ft. Narrowed the cockpit from 30" to 28", which I think is the line between feeling of sportiness and feeling like flying a tub.

Unfortunately, it's going to force me to redo the performance and stability analysis.

Radicaldude 123, If you kick the tail up you get a whole lot of benefits, including more vision from the Rear seat, the Ht is more imbedded in the rear fuselage and you VT looks a little small, but nice 3D drawing - wish I could do that..
George

Lendo said:
Radicaldude 123, If you kick the tail up you get a whole lot of benefits, including more vision from the Rear seat, the Ht is more imbedded in the rear fuselage and you VT looks a little small, but nice 3D drawing - wish I could do that..
George
Click to expand...

in the superimposed view it looks like the fuse was shortened and the VT sized down as well...not the combination I am familiar with!
R

The tail was highly oversized in the last version and both the vertical and horizontal tail volumes are closer to “average” GA aircraft values.

That VT was probably twice as big as it needed to be...what is lost, however, is "area under the horizontal stab" which I suspect aids a lot in spin recovery.