I "rode" on the back of a trike wing. The seat was higher than the front pilot and I could see above his shoulders and reach around to the yoke and fly it some.

BBerson said:
I "rode" on the back of a trike wing. The seat was higher than the front pilot and I could see above his shoulders and reach around to the yoke and fly it some.
Click to expand...

Yeah, but not quite that high in the back seat

As to the first picture all I can say is "eyes forward and no talking".

Now the Hummel Ultracruiser says that it is a single seat but Dennis Brooks on Youtube flies +1 with Spike a lot in his videos. ¯\_(ツ)_/¯

One could do dual control in a stagged setup, a R22 style stick could work nicely, plus the stagged seat would be better for long flights allowing one to getting into stowage behide the pilots seat, without twisting 180 degees.

LOLOLOLOLOLOL! Ah, god, thank you for that laugh.

As for staggered seating, I love the idea, but recognize that the better half wouldn't put up with it, regardless of the engineering "positives." Since the logical baggage space for staggered seating is behind the pilot and next to the passenger, she'd inevitably compare her seat to "being back with the rest of the baggage." My response would probably result in some attorney saying, sometime later, "... and it was at this point that he was killed, your honor."

TFF said:
Most spouses want to sit side by side. Not all, there is always the rare bird, but they are rare. A step back and to the side is a little condescending.
Also staggered means one set of controls. Automatic no bi-annuals in your own airplane or any safety pilot practices. If currency is your thing, it’s out.
Click to expand...

I don't know that lack of dual controls prevents one from doing a BFR in a plane, I think it's up to the CFI. After all, it is possible to do a BFR (and even a checkride!) in a single seater, with the instructor or examiner watching from the ground (in the case of a checkride, the certificate issued will have a limitation prohibiting passenger carrying).

I don't know how my sister feels about the tandem seating in her husband's RV-8, she's never said anything about it that I recall. But for him, as a former F-106 pilot I'm sure tandem was the only choice.

Here's an idea...why not staggered seating with the pilot to the rear and passenger forward?

Stagger the seats by, say 18"/45 cm, and use a half-panel in front of the pilot angled so both can see it. Then the passenger feels special rather than stuck in the back and the passenger weight (typically much heavier than baggage) is closer to the CG in a tractor-engine design. You also have very easy access to the area behind the panel for wiring, etc.

There is also the option of tandem seating with the pilot to the rear, you can raise the pilot about 12"/30 cm with storage under the seat and then everyone has a good view. Again, it makes the passenger feel special rather than like riding on the back of a motorcycle.

The Aeronca C3 fits into this space. Always wanted one. Very comfortable single seater with possibility of a cozy shoulder passenger.

Build a wide version of the Stewart Headwind... You're there. ;-)

My kitfox model 1 was supposedly a 2 seater but with only 35" at the shoulders and 33 at the hips, you would have to be willing to be cozy unless you're tiny. I'm about a 95 percentile male so not tiny and I'm claustrophobic. I'm currently in process of converting it to a single seater sitting in the middle. Sitting in the middle I've measured 8" from either elbow to the sides of the plane. I start getting anxiety just thinking about being stuffed in there with another person
L

The JMR is built for a large pilot. Fuselage at cockpit is 28". Nearby neighbor is 6' 5" x 280 lbs and he said he was comfortable. Anything less would not be wide enough. 30" wide would be better if you could. My Falconar F12 and the Bearhawk is 42" wide for 2 people and you wouldn't want any less.

Anywhere from 24 to 30 inches is reasonable for a single seater. But modifying a Kitfox means you are (probably) not cutting the fuselage and narrowing it... just moving the seat to the center.

The Sky Raider and Ridge Runner single seaters are essentially de facto Kitfox 1's built to 24 inches, and they apparently work great (I just bought a Ridge Runner myself).

Victor Bravo said:
No, the 172 is wider than that. The Taylorcraft is 39 inches, and that's about close to an early 172. The later 172's are a couple or three inches wider than the old ones.
Click to expand...

Being of, err, "Grand Size" myself, cockpit room is actually something I pay a lot of attention to. Back about 36 years ago, I was working Boeing's proposal for the original Space Station. As part of it, they asked for volunteers to have their dimensions measured to find 5% female and 95% male examples to use as test subjects in space station design.

Went to Boeing's Renton plant, where they had a big iron maiden setup (in the medieval, not rock and role sense) that had all these structures to measure various parts of your body and how much range of motion you had.

I didn't get picked for the test team as too many of my measurements were beyond 95%... in fact, over 99%. Here's the card they gave me:

It went a long way to explain why I had trouble fitting in various airplanes and even cars.

For a while afterwards, I took a tape measure to every fly-in and (with the owner's permission) made a series of measurements related to cockpit size. You can find my results here:

Didn't record the year of the 172, looks like it might have been important. But I certainly measured more than 36".

Note that *all* cockpit measurements were made by myself. I had a lot of eager folks (and companies) volunteer their own measurements, but never would be sure if they were done in the same way I did mine.

The aircraft I have now is my second Sonex ... and they both have the center stick option. I generally fly left seat but have at times sat in the center with the stick between my legs and used the outside rudder pedals. Feels quite natural that way, the view is quite good, and it's easier to keep a check on my six.

I'm not real large (5'9"/185lbs) so I get to fly passengers. I love sharing the joy & beauty of flight! But sharing is a limited time thing in a small cockpit, except for the wife ... she can ride all day if she wants!

In another thread a few years ago I gave some details about my approach to gaining as much room in the cockpit as possible (within reason). Since that time a transponder has found it's way under the panel and there is a spot waiting for a TruTrak Autopilot as soon as those lottery numbers hit:

I flew a Gulfstream and wondered why the cockpit didn’t have more room.
Never fast enough either.

Mark Z said:
I flew a Gulfstream and wondered why the cockpit didn’t have more room.
Click to expand...

Nobody paying for a Gulfstream gives two hoots how big the front seat is. The back seats are comfy though. 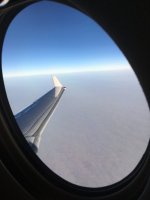