To distill this down for the average homebuilt, you will find that the operating limitations will state that you will fly under VFR rules per 91.205. For something historic, you could possibly get different limitations but it probably would restrict who could fly the plane and different from normal training before allowing to fly it.

The simple answer is stick you head in a Cub or a Champ and what is in there is about the minimum you will get away with, without dancing on your head. Push it too much today and they will just desk your paperwork or move it around indefinitely. If you are going to be libertarian about it, just let us watch the floor show.
R

proppastie said:
this one quotes chapter and verse of applicable regulations for instruments........but I would guess there must be written guidelines for a DAR inspection....sure 43-13 works but with a true experimental some of the "acceptable practices" of 43-13 may not be adhered to......for example the sailboat rope instead of aircraft quality steel cables....or the many automotive items such as auto seat belts etc. Grade 8 bolts instead of AN bolts......is it just up to the inspector or is there written guidance.
Click to expand...

Anecdotal evidence suggests that a DARs may be more likely to do a careful safety inspection of the a/c and be prone to 'pick every nit'. This can obviously be a very good thing, especially if you're building in relative isolation, without regular visits from more experienced builders. But if the DAR doesn't know or misunderstands the law, it can give you fits. For instance, one well known (and published) DAR has publicly said that he would not sign off a kit airframe that had been modified, unless he was shown an engineer's sign-off on the mod. While he gets to make that judgement call on whether he signs off on the a/c, the logical extension of that personal policy is that he wouldn't sign off on any alternative engine installation, nor any non-kit aircraft without an engineer's study, which would be rare, at best. It also ignores the fact that undoubtedly, many kits are being sold without an 'engineer's signoff' on any part of the kit.

There are two sides of this. The airplane can exist with a really messed up set of operating instructions to cover special situations. You could probably get the airplane signed off with no instruments. The Wright flyer reproductions for example. The people who try to fly those are getting wavers. Not anyone can walk up and be legal to fly one.

The pilot getting in the plane is held to a different standard of minimum working instruments. You as a regular pilot have to have a working airspeed indicator, altimeter, compass, tach if there is an engine, water temp if water cooled, oil temp if air cooled, fuel quantity, and some others if it’s more complicated. The pilot is held to a standard that he can’t fly the plane legally without those. Transponders and ELTs are in the pilot part of the FARs not mechanical side, too. I know of an aircraft that has been flying illegally for the last 40 years. Probably sat in a barn for 20 of those. The owner today is reading only the rules he likes. He is a CFI too. All the time he has in this thing could be taken away because he is being subjective on rules he wants to follow.
R

FAR 91.205 and although it’s not direct because of homebuilt not being standard category, your operating instructions in your plane say you will fly as 91.205. Back door requirements.
R


§ 91.205 Powered civil aircraft with standard category U.S. airworthiness certificates: Instrument and equipment requirements.
(a) General. Except as provided in paragraphs (c)(3) and (e) of this section, no person may operate a powered civil aircraft with a standard category U.S. airworthiness certificate in any operation described in paragraphs (b) through (f) of this section unless that aircraft contains the instruments and equipment specified in those paragraphs (or FAA-approved equivalents) for that type of operation, and those instruments and items of equipment are in operable condition.
Bolded text by me.
Underscore by me.

EAA maintains, and I've never heard of the FAA disagreeing, that 91.205 is first, about required instruments; not operation (Here for flight rules), and second, experimentals are exempt from 91.205 because they do not have a standard airworthiness certificate.

I could be wrong, but then all the alphabet orgs would seem to be wrong, too (that's where I originally got the info).

Note that typical H.E. oplims *do* specifically make 91.205 applicable to H.E.s if they're operated at night or under IFR. Not much reason to spell that out with an 'unless' in the oplims, if they already apply to Day VFR, I would think.

Screenshot from my oplims (yellow outline by me): 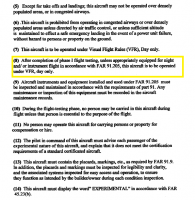 But as I said, I could be wrong; I'm certainly no aviation attorney, nor have I stayed in any motels lately.

My first flight instructor had been an instructor in Powered Airplanes, Gliders, Seaplanes since 1937. When I was a student pilot he had me doing spot landing with a sheet over the instrument panel , no everything. It helped on day, I made a turn at the end of a narrow grass runway and my pitot tube under the low wing of the Falconar F-12 got caught in high weeds and bent backwards. On takeoff of the very short runway there was no aborting. Landed at another runway to check why I didn't have any airspeed. One of the best landing I ever made.
Also taught me to do smooth water seaplane landings at night time with no landing lights. Said light bulbs burn out. I had to use that one night.
You must log in or register to reply here.
Share:
Facebook Twitter Reddit Pinterest Tumblr WhatsApp Email Link