Problem with only working at night is it’s hard to tackle long projects. I bit the bullet last night and glued up the spar cord and reinforcement. Didn’t end up finishing till 1am. I’ll feel better about it today when I take the clamps off. What you can’t see in the picture is the 6’ level clamped to the bottom to keep the spar cord straight.

You know you have been away from wood working to long when you make a stupid mistake that even a rookie wouldn’t make. I grab a piece of plywood that I thought was 1/8” and didn’t bother to check it. It was for the wing rib doublers it attach the ribs to the spar. I finally thought to check it but the damage was done. It was 3/32 so the doublers have to come off..

The wrong doublers are off. Used a set of new chisels to remove the bad wood and scrape the area clean rather than sanding it. Glued up the end of the spar with the proper doublers. In the second picture you can see the replacement doublers fitted but not glued. I’m using blocking to apply pressure versus direct clamps in case there is a void. The glue can fill most areas if it’s over 1mm I’ll replace the piece. 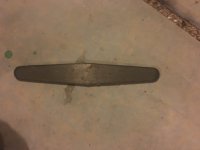 True confession I hate making parts out of 4130. Things are way better now with my Cnc plasma table. Finally got the opportunity to use it for my other project and decided why not this one. Below are the first two parts I cut for my hurricane projects. This piece is the horn for my tail wheel steering. Was doing one on the Bridgeport, had over an hour and not even one side done. Took 3 minutes to cut and 5 to draw. 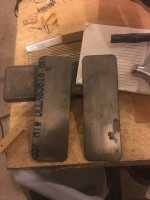 This piece is the mounting plate for the tail wheel assembly. Took two minutes to cut both and a couple of minutes to draw.
The short side was right and the long side was .01 off. I’m starting to like metal work, next come welding.

Should never take to much time off when working on a project. Glueing up the front side of the center spar. Both upper and lower cords done, have the upper cord reinforcement done so starting with the upper. Glued the cord on then realized that I had glued the bottom cord in place not the top. Three choices at this point, pull the cord and clean everything up as best in can, leave the reinforcement off and scrape all the dried glue off or make the bottom reinforcement before the glue sets. Elected number three, never made anything so fast when working on airplanes, done in under 15 minutes, the pieces is 82 inches long. Decided last night to glue the top cord on and not do the reinforcement until later. Very careful with the glue won’t require much clean up.

wiloows5050 said:
All four end caps completed and fitted to the tubes. Two pictured with there matching tubes.
View attachment 54783

Inner tube with both end caps in place. Still need to drill and tap for set screws. I cut the washers out of the wrong size stock so I'll have to recut them.
View attachment 54785
Click to expand...

When you look at the plans ready them several times. The aluminum washers for the tube ends were suppose to be 1/2 in I made them 1/4 in. I was looking at the drill point not the overall thickness. Drilled one tube wrong then when back and looked at the plans and realized my mistake. Time to start over and remake the washers and one of the tubes. Most of the parts are welded and will have to wait for the new pieces to be made. Progress has been really slow as my shop is over crowded with Projects (10 including a Warner 165 engine rebuild).
You must log in or register to reply here.
Share:
Facebook Twitter Reddit Pinterest Tumblr WhatsApp Email Link